A Lucasfilm executive is defending a controversial scene from the latest episode of “The Mandalorian,” in which Baby Yoda eats the eggs of a new character. 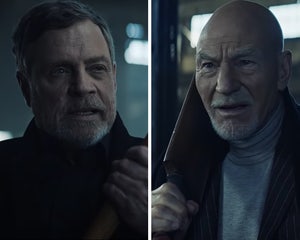 During Season 2 Episode 2 titled, “Chapter 10: The Passenger,” Mando (Pedro Pascal) and The Child aka Baby Yoda were tasked with transporting an unnamed Frog Lady — and her container of unfertilized eggs — to her husband who is on another planet. The eggs weren’t only precious cargo but were said to be the last hope for the Frog Lady’s ancestral line. However, during the episode, Mando caught Baby Yoda eating the eggs on several occasions. Although he reprimanded him, Baby Yoda continued to attempt to sneak a taste of the forbidden fruit, creating a running joke throughout the episode.

While it was clearly intended as a joke, many fans — and some moms in particular — didn’t find it funny and described the gag as “incredibly upsetting” and “deeply disturbing.” One user even said Baby Yoda eating the Frog Lady’s egg was “genocide.”

In response, Szostak attempted to set the record straight on Twitter, noting that since the woman’s eggs were unfertilized, Baby Yoda eating them is just like humans consuming chicken eggs.

“For the record, Chapter 10 of #TheMandalorian makes it clear that the Frog Lady’s eggs are unfertilized, like the chicken eggs many of us enjoy,” he wrote. “But obviously, chickens aren’t sentient beings and the Child eating the eggs is intentionally disturbing, for comedic effect. #StarWars”

“Fans of horror know that disturbing things make some of us laugh and some of us squirm, or both. Your mileage may vary,” Szostak added in another tweet.

Despite Szostak’s clarification, many critics continued to share that they took issue with the episode.

“for the record, the frog lady was very adamant about the fact that her eggs were important to her, and that it was her last and only chance to have kids,” a user wrote. “So it’s actually closer to f–kng up someone’s IVF which would be incredibly upsetting for a wannabe mom. it’s not funny.”

Another said, “Having gone through IVF, every single goddamned egg is precious when your time is running out and you have no idea which ones will fertilize, if any. I pretty much assumed that it was a sign that there is something deeply disturbing about baby yoda. Not, ha ha this is funny.”

“Fertilized or not, they were precious to frog lady,” echoed another critic. “Evey [sic] one of them. She trusted The Mandalorian for their safe passage. Would u say the same thing if a woman struggling with infertility loses all the eggs that were inspirated [sic] for ART?”

However, one Twitter user apologized to Szostak for the backlash.

“Sorry about all this mess Phil. Everyone is stressed out & tired. It was just unintentionally triggering for many,” the person tweeted. “I think we all need to sit down & don’t forget to breathe.”

Szostak replied, “No worries and I’m glad people are talking about it (although I’d rather people not argue and name call). Everyone’s perspective and feelings are valid. Art can provoke and disturb as much as it can makes us happy and laugh.”

TooFab has reached out to Lucasfilm for further comment.