Victoria’s COVID-19 commander Jeroen Weimar has warned the decision on easing restrictions such as the ban on travel between Melbourne and the regions ahead of this month’s school holidays will be more difficult if testing numbers do not increase in the coming days.

Mr Weimar said he believed there were undetected cases circulating in the community that can “linger and build” if they aren’t flushed out – a task requiring at least 20,000 tests per day. 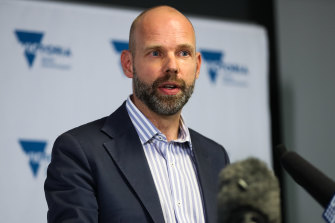 Testing numbers dropped to their lowest level since the current outbreak began almost three weeks ago on Saturday, with 15,110 results received and one new case detected.

Almost four times that number were recorded on June 3, when 57,519 tests were processed.

Saturday’s single case was a man in central Melbourne whom Mr Weimar said was likely to be connected to the larger outbreak of the Kappa strain because he lived in the same area as other recent cases.

Contact tracers are still investigating the source of infection of a Reservoir family of four who tested positive on Friday and Mr Weimar said it was mystery cases such as those that fuelled his suspicion there were more cases yet to be picked up.

“What I’m a little bit concerned about is being well-advanced now – we’re almost two and a half to three weeks into this outbreak – but we’re still finding new branches,” he said. 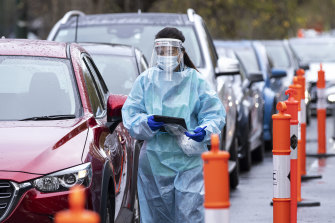 Lines at testing sites stretched for kilometres in the early days of the outbreak.Credit:Getty Images

“My personal view is that there are certainly more cases out there, I think we’re talking very small numbers, but we really need to track them down.”

The COVID-19 commander said he was a “little bit concerned that testing numbers are starting to drop” ahead of a decision on what restrictions can be eased this week.

“If we’re in a world where we’re seeing really low testing numbers over the next three or four days and we’re still finding one or two cases out there, that makes the decision on Wednesday, Thursday so much harder to make.”

However, Deakin University’s epidemiology chair Catherine Bennett said a reduction in tests was to be expected as exposure sites being reported each day reduced, seeing fewer close or potential contacts being called on to undergo testing.

She said the measure to watch was the number of people who were getting tested because they had symptoms.

“If they can look at how many people are coming forward on symptoms, and they’re being maintained, then it doesn’t matter if the total number drops,” Professor Bennett said.

Regional tourism spots saw a fraction of their usual long weekend crowds on Saturday on the back of Melbourne’s 25-kilometre movement restriction. With school holidays starting on June 25, Health Minister Martin Foley said the economic benefit of allowing travel within Victoria would be considered but was not paramount.

“Public health does take into account all these multiple different influences, but the key driver is: what is the public health data telling us?” he said. 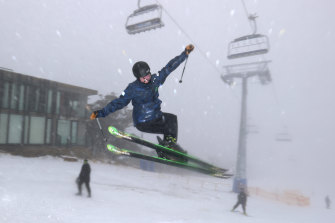 In a sign the dip in testing off record highs has health authorities worried, Health Department chief Euan Wallace tweeted overnight that people with a sniffle and sore throat should get tested.

Professor Wallace revealed this week that Melbourne’s Kappa coronavirus outbreak would have been contained to just over a dozen people if there had not been a delay between people developing symptoms and getting tested, according to the department’s estimates.

It has now spread to about 80 people.

Epidemiologist Adrian Esterman said he would like to see three or four days without any cases of coronavirus in Victoria before consideration could be given to lifting travel restrictions between Melbourne and the regions, ahead of the school holidays in two weeks.

He said the recent testing rates were too low, especially alongside the mystery cases and given there would be many people with COVID symptoms, because of the higher number of colds circulating in the community.

Professor Esterman, the chair of biostatistics at the University of South Australia, said while he was now cautiously optimistic the Victorian outbreaks would be contained, the current restrictions which see Melburnians mostly banned from having guests in their homes would need to continue for a number of days.

“And of course, the other states aren’t going to open their borders until we see a string of zero days in a row,” he said.

National data from the FluTracking project showed that last week almost 60 per cent of participants with a fever and cough were still not getting tested for coronavirus.

And while the symptoms of flu-like illness are still much lower than pre-pandemic levels, they are significantly higher than this time last year.