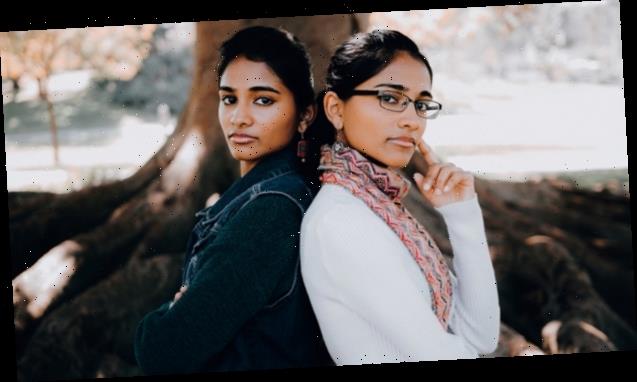 Kiran + Nivi have have drawn more than one million fans on TikTok by adding elements of classical Indian music to hit songs. The twins explain how they’re now using similar techniques for original music.

While a talented twin act is always bound to attract attention — as the Olsen and Mowry twins have proven — Kiran and Nivi Saishankar have earned more than one million followers on TikTok for far more reasons beyond the fact that they’re twins who can sing. Like, really sing. The 21-year-old Indian-American fraternal twin sisters from Southern California have even demanded the attention of celebrities like Jason Derulo (who personally invited them into his studio for a collab) because they are bringing something “new” to the music industry. The evidence is in their latest song, “y’all got it wrong,” a track that Kiran said is about proving your online critics “wrong” by making “your dreams come true” despite the “hate” that has manifested online as a result of being on our phones and laptops “24 hours a day” amid the pandemic.

“Our goal is to mix Indian with Western in a very subtle way. That doesn’t make it seem like it’s out of place, but also seems like it’s something cool and something new,” Kiran EXCLUSIVELY told HollywoodLife as we caught up with her and Nivi over a Zoom call after their new song’s March 1 release. In “y’all got it wrong,” this blend of two sounds is so congruous, the untrained ear wouldn’t even notice a mixing of cultures is happening. While the majority of the song incorporates a pop minor scale, an Indian scale was actually added to the verse, called Rasikapriya, which is used in Carnatic music (a classical style popular in Southern India).

Kiran demonstrated this Rasikapriya scale by singing it out loud, which she then transcribed to a Western version: “Do Me Mi Si Sol Le Ti Do, Do Ti Te Sol Fi Mi Me Do.” The difference was clear; in Indian music in general, there are “a lot of oscillations between each note” that are “specific to each Indian scale,” Kiran noted. Once again, she used her commanding voice to highlight these sonic differences between a Western major scale (the classic Do Re Mi Fa Sol La Ti Do scale) and its Indian counterpart. This side-by-side comparison, sung out loud, made the difference in oscillations even more clear: the Indian scale contains nuances unique from Western music, which is what fans are picking up on — even if they don’t realize it.

The twin sisters also invited KanjiraMan, a respected musician from the Indian city of Chennai, to play the Kanjira instrument in “y’all got it wrong.” The percussion instrument heard on the song is played in all South Indian classical concerts, Nivi explained. You see, Kiran and Nivi aren’t solely using their voices to “solidify” this new sound that they’re trying to introduce to pop. They’re also bringing on-board classical Indian instruments that stand out from the sea of Western drums, guitar, piano and synths; another example is their 2020 song, “Real Friend,” which incorporated North Indian classical instruments called the harmonium and tabla.

You don’t need to be brushed up on music theory, however, to recognize that “y’all got it wrong” doesn’t sound quite like other Western pop tracks (even if it’s sung in English). Kiran and Nivi’s decision to start making this type of music actually stemmed from the rave responses they were receiving from fans who weren’t familiar with South Asian music on TikTok. After joining the short-form video app in 2019, the twin sisters began posting mashups of popular pop songs by artists like Lil Nas X and Daniel Caesar. These weren’t simply covers of Top 40 pop tracks: Kiran and Nivi were adding to the songs by using a type of solfège called swaram (you can listen to this technique being applied to Kali Uchis‘s viral song “telepatía” below).

“It was actually shocking that a lot of people seem to like that [swaram] part and they’re like, ‘Okay that part is like really cool, can you do that more?’,” Nivi said. “So it was actually really shocking because people who don’t even know what this music is, and who don’t even know what this is, seem to like it and seem to, you know, really relate to that and connect…That actually made us think, ‘Okay, why can’t we add this into our original songs?’”

Celebrities were also taking notice of Kiran and Nivi’s dynamic covers. James Arthur shared their cover of his song “Trainwreck” on his Instagram Story; Ashnikko commented on the Kiran and Nivi’s cover of her song “Daisy”; and the duo  earned TikTok follows from Shawn Mendes and Meghan Trainor. The most “unreal” celebrity experience Kiran and Nivi have had so far, though, was recording in Jason Derulo’s own music studio.

“I think it was around December [in 2020]. Like he just randomly DM’ed us on Instagram. And he was saying that ‘You guys have incredible voices and [I] would love to collab on TikTok’,” Kiran said while recalling how they linked up with the “Savage Love” singer. After realizing they were indeed receiving a DM from Jason’s “real account” — not a fan account — the sisters found themselves at his house the very next week recording a TikTok to his song, “Love Not War.”

“It was really surprising, because he really loved that Indian part that we do in our TikToks and he wanted that to be added in his song, like as a collab. And so we did that…we added a swaram segment for his song, ‘Love Not War.’ And he really loved it,” Kiran shared, who gushed that the pop icon was “actually very down to Earth” and “very humble.”

This hybrid swaram-pop sound in Kiran and Nivi’s music, however, is not what’s only striking fans and stars alike as something new to their ears. There’s an undeniable synergy between Kiran and Nivi; not necessarily because they are twins, but because they work so well as artists…who don’t do that much twinning at all in their musical styles. This may come as a surprise, but Kiran and Nivi actually practice separately in their own rooms. “I think that really helped us to have our own style of singing…[Nivi] has her own way of singing things and her own approach to music and I have my own approach and perspective,” Kiran explained, who said their duets are the result of “two artists collaborating every time” versus sisters merely duetting.

“My kind of style is more powerful — I’m very, like, a direct person. So my music also kind of is a more direct approach to things. Like, I just want to hit the note straight,” Kiran said. On the opposite end is her sister, whom she described as being “very melodic.” Nivi elaborated on this, saying, “I can be more vulnerable about showing the emotion of the lyrics…there’ll be some songs that I really connect to the lyrics. I show the emotion to that, I think more.”

This dynamic between “soft” and “powerful” doesn’t set the stage for a power struggle when it comes time to perform, though (whether that be for TikTok viewers or a live concert audience). While their singing styles may be a 180 from the other, Kiran and Nivi are still in tune with where the other will take their tune next. It’s innate, an ability that they discovered at just three years old when the host of their parents’ Indian church asked the twin sisters to sing a devotional hymn. Despite being unable to speak and make sounds like most three year olds at the time, Kiran and Nivi discovered they could sing the hymn together with the “perfect pitch and rhythm” the very next week.

“Sometimes even in our Indian classical concerts, when we perform live — I can gauge what next she will sing, and she can gauge what next I will sing, and we just like kind of coordinate. It’s like we don’t even have to practice [together] before to actually know what she’s going to do next. It kind of just comes naturally that I kind of know what she’s gonna do,” Nivi explained.

With a new song out (and another one in the making) and growing popularity among fans and celebrities, Kiran and Nivi are on an exciting trajectory. They plan to turn professional in music after graduating from the UC Irvine this spring of 2021; Nivi is double majoring in music and business and economics, while Kiran is double majoring in music and psychology. What Kiran and Nivi are looking forward to most, though, is seeing their fans beyond the TikTok comments section (after the pandemic, that is). “I think a lot of our comments [on TikTok] are saying like, ‘I would pay any, any tickets to come see you live. And that kind of actually means a lot,” Nivi said, who added, “When you actually see your fans directly in the stage and you see them like, you know, reacting to your music live…I think that’s what makes all of this pay off, right?”