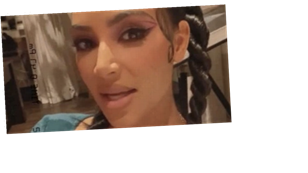 Kim Kardashian has shared a peek inside her wild girls night with sister Kourtney.

The Kardashian sisters looked like they were having a terrific time as they were joined by a group of friends for a boozy night in.

Kim, 40, captured the evening’s events and documented them on her Instagram, sharing them with her 210 million followers.

Kourtney, who recently confirmed her relationship with Travis Barker, looked like she was having a lot of fun, as she strapped a white leather belt with handles around her waist and bent over as her friend started grinding on her.

Kim couldn't stop laughing, and shouted: “What? What!” as the action unfolded before her eyes.

As the group of ladies sat around and watched, another shouted: “Look how fancy it is! Where do I get it?"

Kourtney then moved over to a table and the girls around her cheered as the shenanigans continued, with Kim adding: “She is so excited right now, you have no idea.”

The Kardashian sisters and their pals sat in a huge, stylish room with a table in the centre, on which sat drinks galore.

During the wild night in, the girls played Pictionary, Taboo, Connect 4 and Charades, and Kim could be seen in a very glamorous blue outfit playing along.

The reality star wore a stylish makeup look and her shiny locks in plaits for the evening.

The ladies night comes after Kim filed for divorce from her rapper husband Kanye West, with whom she shares four children.

In the famous ex couple’s divorce papers the Keeping Up With The Kardashian’s star cited "irreconcilable differences" as the motivation for ending her marriage of seven years to the 43-year-old rapper.

Her filing was viewed by The Sun and it also shows that Kim is seeking to have joint custody for their four children: North, seven, Saint, five, Chicago, three and one-year-old Psalm.

The glamorous business owner has also asked that the ability to award spousal support by either her or Kanye be terminated.

The couple’s divorce is believed to be amicable.

A source told People: "There is no drama between Kim and Kanye.

"Kim is mostly just disappointed that they couldn't figure out how to stay married. But it takes two people to create a happy marriage.

"Kim has felt Kanye is not willing to do the hard work and compromise."

A source explained to The Sun: "Kim had visited the idea of divorce so many times that she already had the paperwork drawn-up and ready to go, when she finally actually filed.

"The move came as a bit of a surprise to her family because they know how much she loves Kanye and knew she didn't really want to go through with it. They all knew she felt she had no choice.”