Kate and William’s Norfolk neighbour Rose Hanbury, 35, and her husband Marquess of Cholmondeley, 58, joined the royal at State Banquet – but she was seated rather far away from Duchess amid rumours of a rift

The Duke and Duchess of Cambridge were joined by their neighbour the Marchioness of Cholmondeley at last night’s State Banquet – despite rumours of a rift between the two women.

Former model Rose Hanbury, 35, joined her husband David, Marquess of Cholmondeley, 58, for the lavish Buckingham Palace dinner, which was hosted by the Queen in honour of the US State Visit.

Rose was seated on the other side of the room, close to the Duke of Cambridge and next to GCHQ chief Jeremy Fleming. 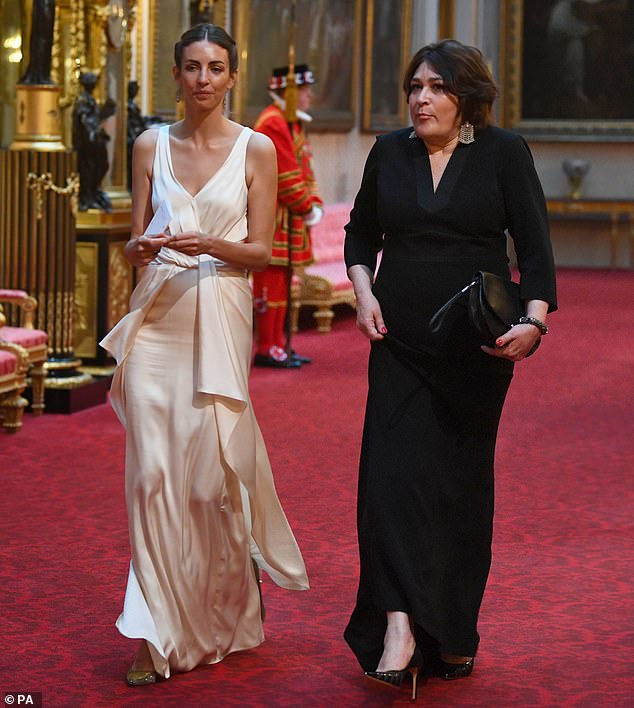 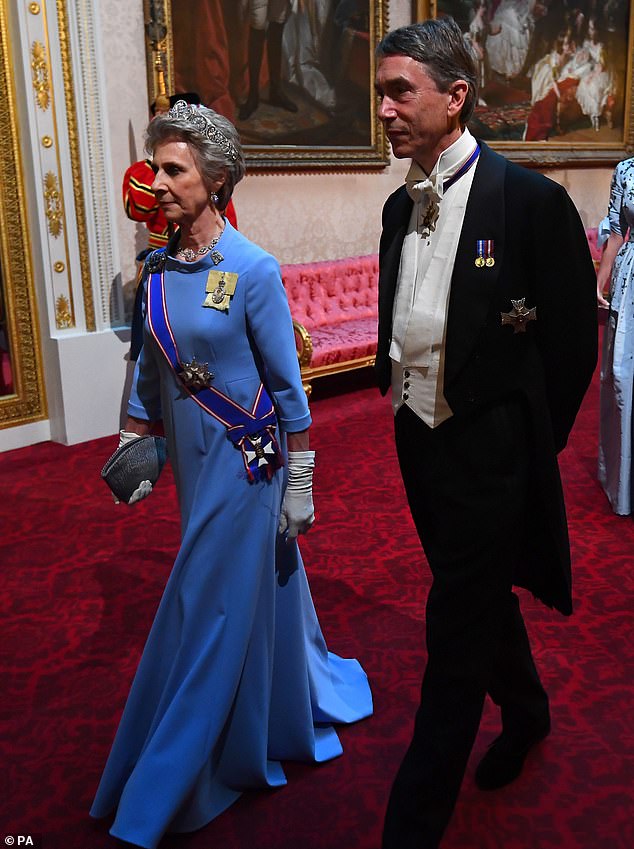 Among the roughly 170 guests was also David, Marquess of Cholmondeley, 58, who holds the post of Lord Great Chamberlain and as such is a regular fixture at State and ceremonial events. Pictured, David accompanying the Duchess of Gloucester into the State Banquet 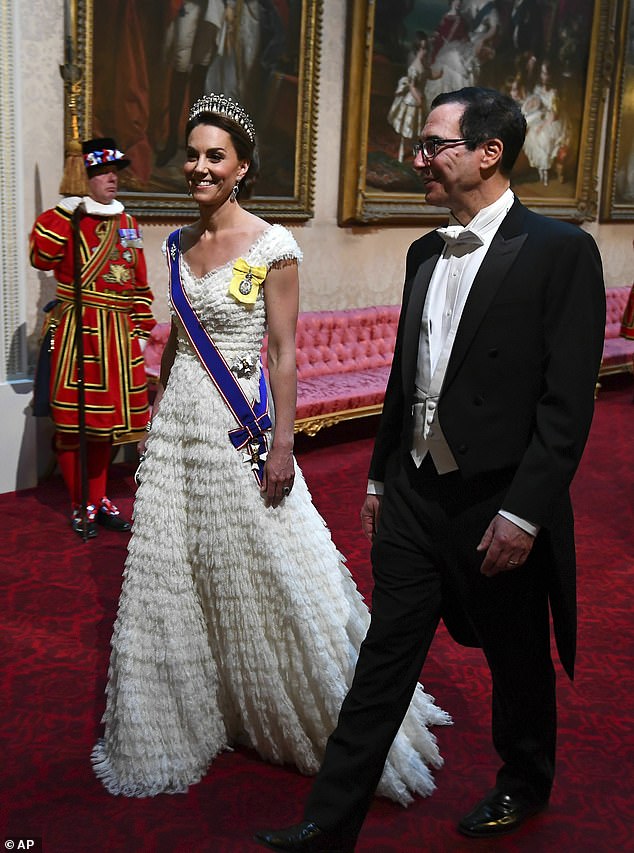 The Duchess of Cambridge looked elegant in an Alexander McQueen gown as she arrived for the banquet alongside the US Secretary of the Treasury, Steven Mnuchin

The majority of couples, if not all of them, appeared to be split up between the two tables. The Marchioness was roughly the same distance from Prince William as the Marquess was from the Duchess of Cambridge.

The appearance comes months after reports first surfaced of a rift between the Duchess of Cambridge and the Marchioness, who lives with her husband and three children on an estate just four miles from the royals’ Norfolk home of Anmer Hall.

Up until then Kate and William had long been thought close friends of their neighbours.

The first inkling that something was awry came when Daily Mail diarist Richard Eden reported that friends of the Duchess claimed ex-model Rose was ‘a rival to her rural crown’.

Among their Norfolk set – affectionately nicknamed the ‘Turnip Toffs’ – it was Kate who was always presumed queen bee.  ‘On the face of it, it’s bizarre, but Kate seems to see Rose as a rival,’ one source was quoted as saying. 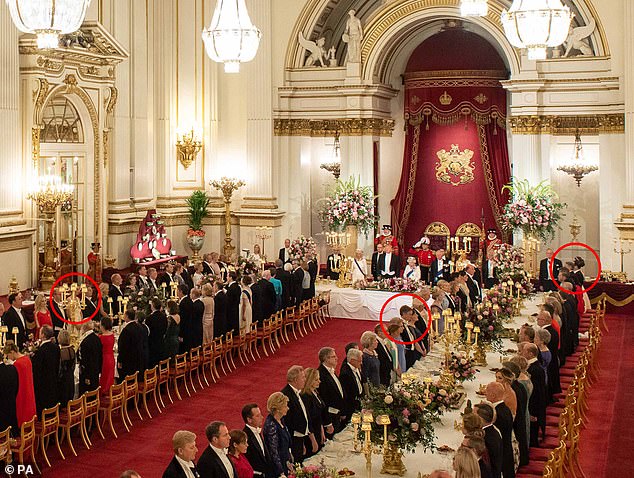 While Kate and William stay at ten-bedroom Anmer Hall, which was previously rented out to a kitchen timber boss, Rose and her husband live in splendour three miles away at Houghton Hall, one of the country’s finest Palladian houses, surrounded by 1,000 acres of parkland.

The Cambridges moved to Anmer on the Sandringham Estate in 2014 when William joined the East Anglian Air Ambulance charity.

Rose and her husband have twin boys, Alexander and Oliver, and daughter Iris. The boys have been playmates of Prince George.

At William and Kate’s wedding eight years ago, Rose was widely considered to be the best-dressed guest. In 2016, the Royal couple attended a black-tie gala at Houghton Hall. And the two couples are said to have shared dinner dates. 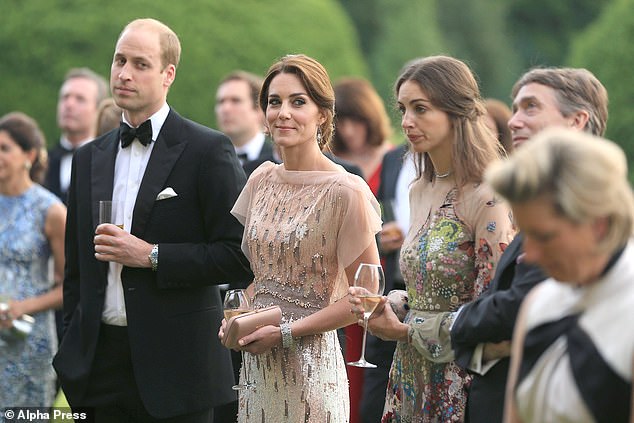 The Marquess and Marchioness of Cholmondeley live just a stone’s throw from the Cambridge’s Norfolk home, Anmer Hall, and are part of the social circle that has come to be known as the ‘Turnip Toffs’. Pictured, the two couples at an event in June 2016 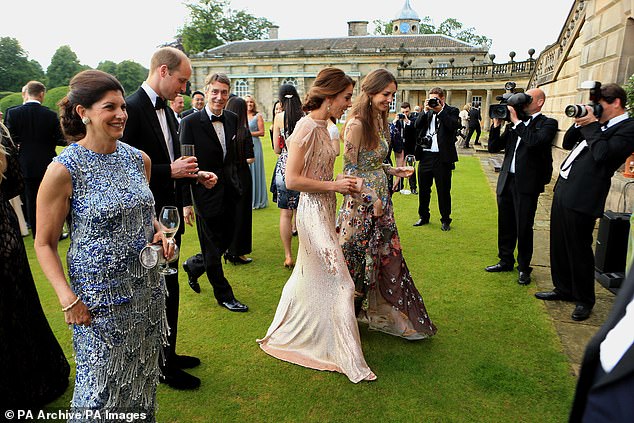 The Duchess of Cambridge and the Marchioness of Cholmondeley chatting happily at a 2016 fundraiser for the East Anglia’s Children’s Hospices, of which they are both patron. Rumours of a rift between the two women first surfaced in March

While the couples have reportedly since grown apart, any concerns appeared far from their minds as they arrived for the banquet last night.

Society beauty Rose, who was once represented by the same modelling agency as Kate Moss, made the most of her willowy frame in a flowing cream satin gown.

She wore her brunette locks swept up in an updo and kept her accessories to a minimum, adding just a pair of metallic point-toe pumps.

Meanwhile the Duchess of Cambridge was resplendent in a white textured gown designed by Alexander McQueen. 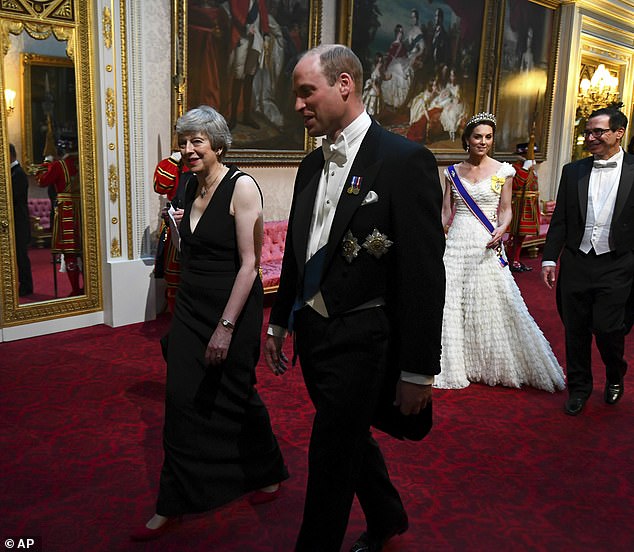 The Duke of Cambridge accompanied the Prime Minister into the ballroom for the banquet last nigh. The royal looked dapper in black tie and had military medals on display 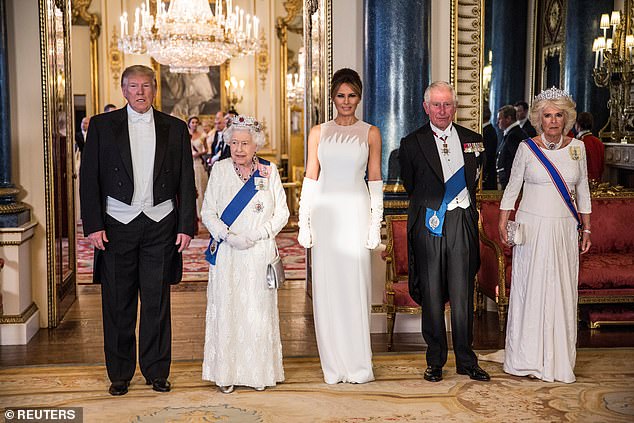 The Cambridges joined the Queen, Prince Charles and the Duchess of Cornwall (pictured together) for the dinner in honour of the Trumps’ US State Visit

Prince William was dapper in white tie, with military medals and royal accolades on display.

Rose, whose grandmother Lady Elizabeth Lambart was a bridesmaid to the Queen, married David in June 2009 at the age of 25.

The couple welcomed twin sons Alexander and Hugh four months later, in October 2009. Their daughter Iris was born in March 2016.