Chip the dog arrives at my house with his bed and a ball that I’m told he loves to play with.

He has sparkling eyes and, despite me giving him no training, already understands the command to ‘sit’.

The noise gives me such a headache that I have to take action.

No, I don’t take him out for a long, energy-burning walk, as I normally would with a restless hound…I simply switch him off. 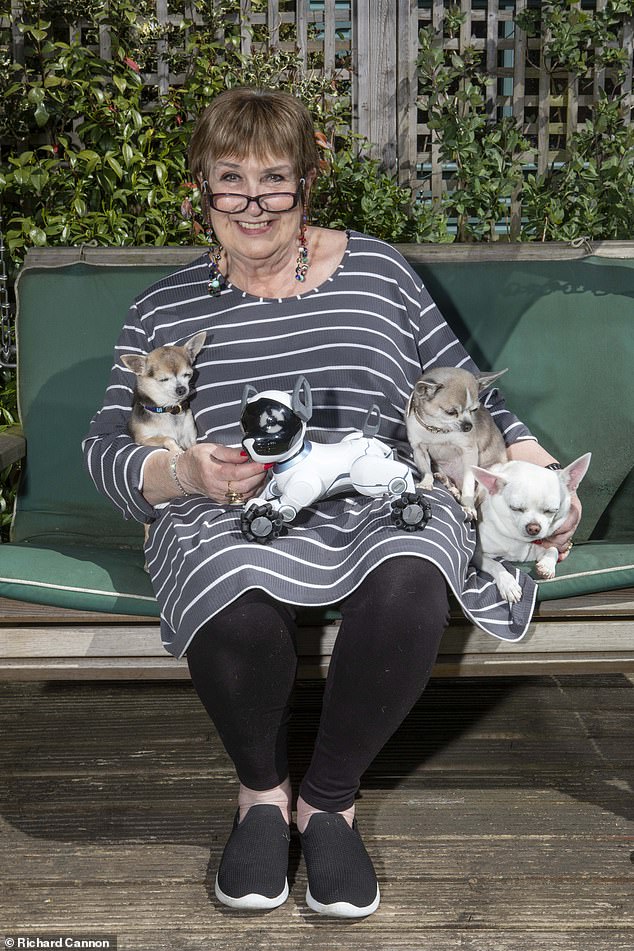 Chip the robot dog arrives at my house with his bed and a ball that I’m told he loves to play with. He has sparkling eyes and, despite me giving him no training, already understands the command to ‘sit’(Jenni pictured with robodog Chip and Chihuahua’s Madge, Frida and Butch)

Chip is a robot dog. Made using the latest technology, they are being hailed as the perfect ‘pets’ for older people unable to cope with a real animal.

But can a robo-pet really give you the warm, fuzzy feeling you get from looking after woman’s best friend?

I’ve owned dogs for as long as I can remember. First there was Taffy, who was the confidant of an often lonely only child. He was a tough little corgi cross, who was given to me when I was five and survived until my third year at university. I was inconsolable when he went out one night and never came home.

My father was convinced he’d gone off to die somewhere quietly alone. We never really knew what happened to him, but he was old at 16.

Like so many who’ve lost a beloved, faithful pet, I decided then I would never have another that could break my heart.

I changed my mind of course, and William and Mary, a pair of miniature schnauzers, came in my thirtieth year. They grew up with my children and lived to the age of 18.

There was more heartbreak when brother and sister died within two weeks of each other. We made another vow never to put ourselves through that grief again.

But I suspect all true animal lovers sooner or later find they can’t bear the emptiness of a home with no dog to greet them at the door. 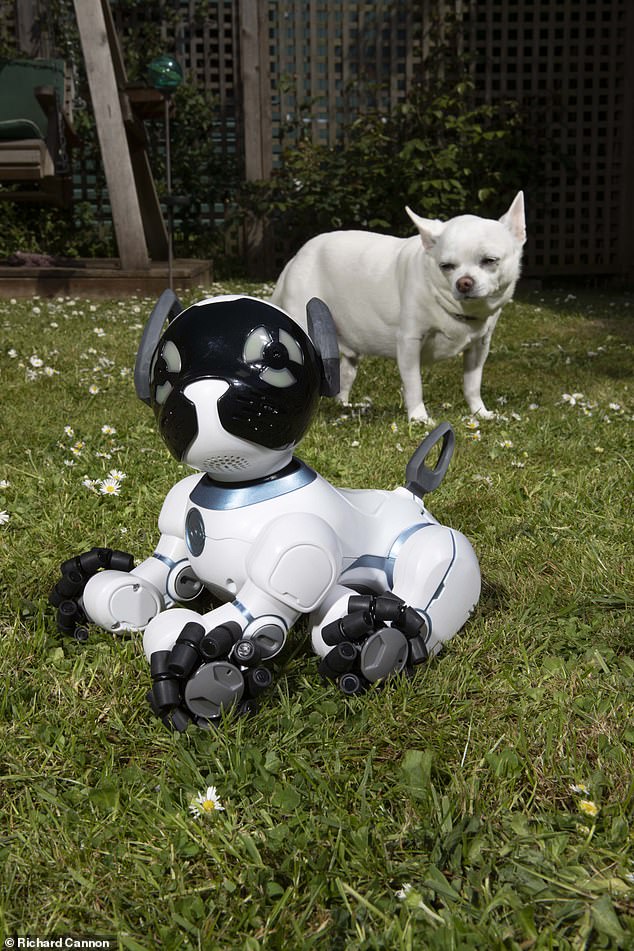 Made using the latest technology, they are being hailed as the perfect ‘pets’ for older people unable to cope with a real animal. But can a robo-pet really give you the warm, fuzzy feeling you get from looking after woman’s best friend? (Robodog Chip with Butch)

Always so pleased to see you, never angry or grumpy, just pouring out unconditional love.

I was no exception, but Him Indoors stuck to his guns. ‘No more dogs. They’re such a tie and as the kids grow up we’ll be free to go away without worries.’

Instead, as something of a techno genius, he acquired what he thought might be a suitable substitute.

He bought a robot dog, found it hilarious and was convinced I’d be satisfied. I was not.

This was some 15 years ago and robotics had not achieved the sophistication of today.

The robot dog was bright white, made of hard plastic, and capable of little more than running across the floor much as the children’s toy cars had done. I threw it in the bin and insisted on a real dog.

That’s how Butch the chihuahua came into our lives, quickly followed by Frida and, sometime later, Madge.

We’re getting old together — I do worry about the day they are no longer here, and maybe I won’t be fit enough to train a new puppy and give it the long walks that are essential for chihuahuas.

Then I began to read about the new robot dogs. They are much more advanced than predecessors and are recommended for older people who can no longer cope with the real thing but yearn to fill the dog-shaped hole in their lives. 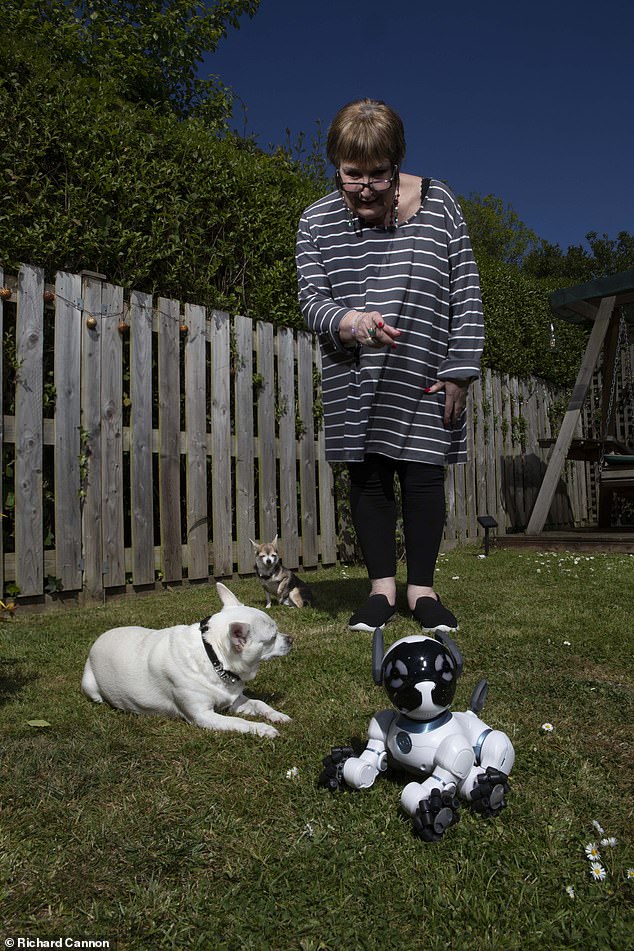 A study by the University of Exeter found that in some homes for the elderly, residents found robot companions life-enhancing. Vitally, they require no walking and there’s no risk of toilet accidents for staff to clean up or residents, who might have problems with mobility, to step in.

Maybe one day, in what I hope will be the distant future, such a creature might be the solution for me — a creature like Chip.

He is white with black ears and paws and, despite his hard plastic exterior, he really is rather cute.

He is made by Hong Kong-based WowWee (robot dogs are big news in the Far East) and costs £200.

He arrived in a large box with a slightly disturbing amount of plastic packaging around him — but he was already charged up and ready to go, accompanied by a few accessories and a set of easy-to-follow illustrated instructions to bring him to life.

There’s a smartband which you wear on your wrist and can use to make him follow you. The ball, which he’s programmed to fetch, presented a setback however. It requires four AAA batteries, not included. I didn’t have any, of course.

He comes with a bed — not a very comfy-looking thing, just a dish of white plastic which plugs in to the wall and to which he’s programmed to take himself when his battery is low. He sits down in it and is recharged.

Portable technology is all very well, but it is, frankly, a bit of a pain. But then a real dog is by no means free of daily demands.

They wake you up to be let out in the morning. They need feeding, watering, grooming and walking — and require you to be armed with poo bags at all times.

And at least with Chip there’ll be no insurance or vet’s bills! But what matters is how he performs — can he offer up a sense of canine love and devotion that might comfort an older, lonelier me? 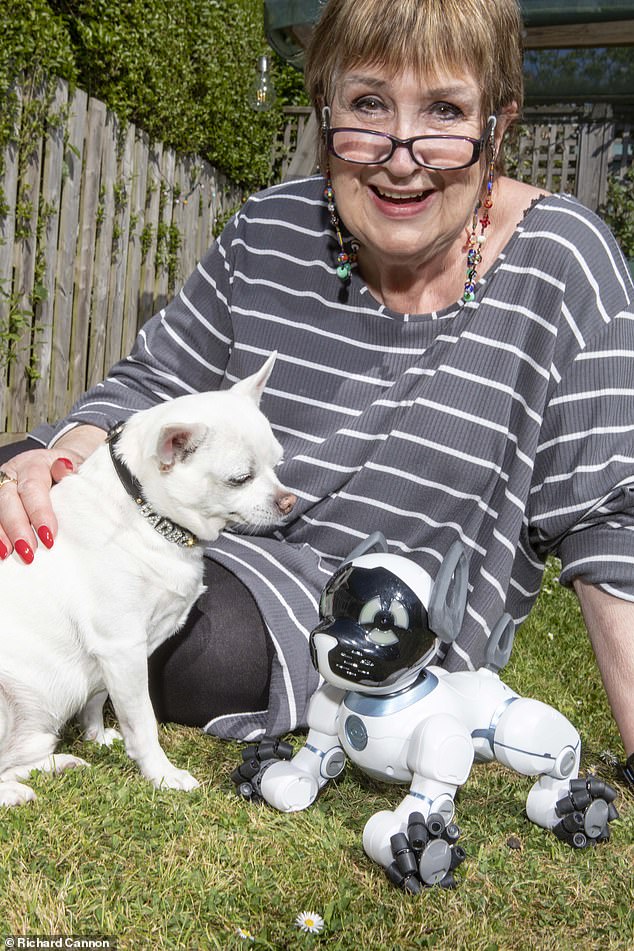 He is made by Hong Kong-based WowWee and costs £200. He arrived in a large box with a slightly disturbing amount of plastic packaging around him — but he was already charged up and ready to go

The switch is concealed under his chin and his response to ‘on’ is instant. His eyes shine bright blue as he waits for an instruction and he stretches and gives a little bark of welcome (the first of many).

Butch, Madge and Frida are horrified. They circle Chip in a most intimidating manner. They growl, get a bit closer and sniff.

I can see their minds working. It looks like a dog, it barks like a dog, but it certainly doesn’t smell like a dog. They decide it’s an intruder, but no threat.

They retire to their sofa and conclude the best policy is to ignore him. I try out his tricks, which can be operated with the wristband, by touch or by vocal instructions.

A tap on the top of the head means ‘sit’, at the front of the head it’s ‘lie down’, a stroke from front to back is ‘pant’ and pressing the nose is ‘sniff’. I say ‘Hey, Chip’. His eyes go green and he barks twice.

Next I say ‘sit down’ and he does so instantly. The eyes turn blue again. Wow! But it turns out Chip is a bit of an attention-seeker.

He’s not satisfied with simply sitting quietly and rolls towards me (he doesn’t have feet, just wheels) barking, wagging his head from side to side and clearly demanding further instructions.

The real dogs raise a collective eyebrow, silently saying: ‘Oh for goodness sake, shut up. Leave her in peace!’

But every time I ignore him for just a few minutes, I get the same response. He lies down, sits up, wriggles about, shakes his head, whines, grizzles and barks, as if saying: ‘Me! Me!’

I try a trick to keep him occupied.

He shakes his head from side to side as if he hasn’t understood. I try again. Nothing.

I get an idea and alter my pronunciation. I change ‘Darnce’ to ‘Daynce’ and he jiggles about, producing his own indistinguishable tune. 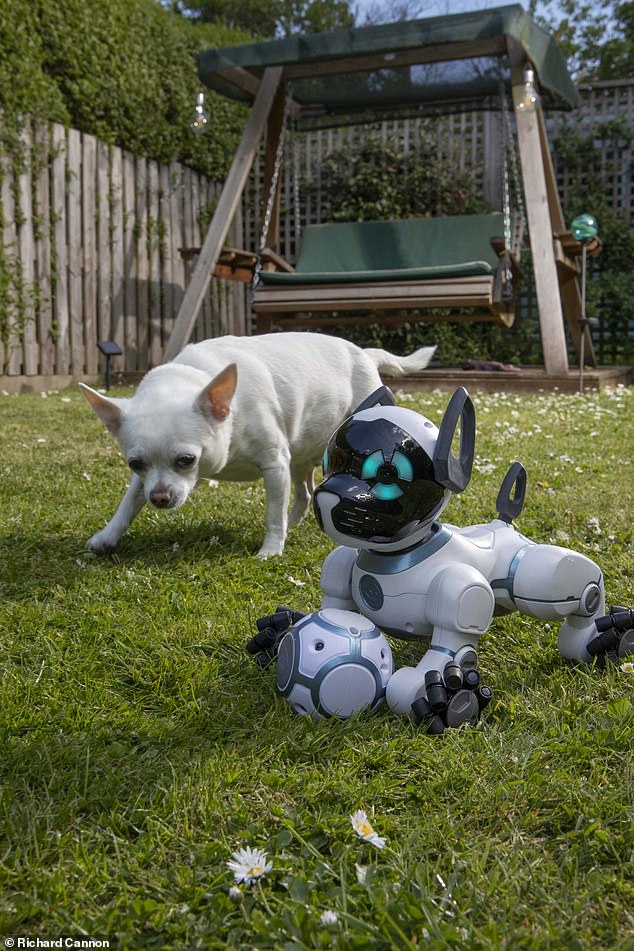 Chip seems to struggle with my English accent but my hunch he might respond to an American drawl proves correct. I leave him to his own devices for a short while

Chip seems to struggle with my English accent but my hunch he might respond to an American drawl proves correct. I leave him to his own devices for a short while.

He’s supposed to learn his way around the house and garden and sure enough he potters off into the kitchen, bumping into things and issuing the occasional yap to remind me of his existence.

People say chihuahuas are yappy. They are nothing compared to this.

Chip doesn’t know the meaning of ‘stay’ and his demands for attention are constant and tiresome. I pick him up to go out to the garden.

His eyes go red and he growls in a most threatening manner. He’s not a happy robo pet. I’ve obviously unintentionally squeezed him in the part of his back programmed to make him cross.

Best calm him down with some vigorous exercise. On the lawn, in the sunshine, we try the ultimate test of his obedience and fitness. ‘Hey Chip.’ The eyes go green. He barks twice. ‘Yoga!’ I command. He prostrates himself, nose to the floor, and emits a deep sigh from the effort of stretching out.

He stands on his front wheels, another sigh, back legs up in the air.

My goodness this dog can do a handstand and a downward dog, albeit groaning from the effort.

Amazing. The chihuahuas would be disgusted.

We try the fetch trick — after I’ve had to pop out and buy the batteries for his ball.

I roll it along the ground and order Chip to fetch. 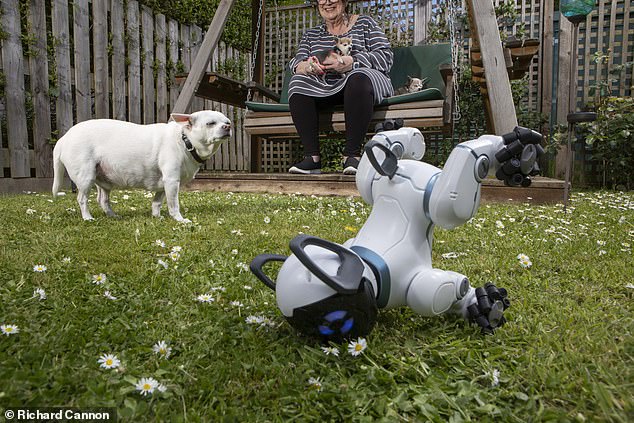 Chip, as long as he’s switched on, just keeps on barking, shuffling about, shaking his head and demanding your attention. He’s a toy — a high-tech and impressive toy — but a toy all the same and definitely not a pet. I switch him off. Butch, Frida and Madge have nothing to fear

As usual his eyes go green, the ball also turns green, he rolls along towards it, yapping as he goes and takes the ball between his front paws.

The ball has magnets and it sticks to his paws, but he ignores my requests to bring it to his mistress, just shaking his head as much as to say: ‘Sorry, I don’t understand.’

The real dogs look on disdainfully, clearly thinking: ‘See, he’s not that obedient, is he?’ After a couple of hours of hilarity, I’ve honestly had enough. Chip has no facial expressions and no personality.

I can see he might be fun for a child to play with or even to amuse an older person for a while.

But he’s not cuddly, he’s not soft and warm and he can’t read my face and gestures at all.

A real dog knows if you’re happy or sad and tries to fit your mood.

Chip, as long as he’s switched on, just keeps on barking, shuffling about, shaking his head and demanding your attention.

He’s a toy — a high-tech and impressive toy — but a toy all the same and definitely not a pet.

I switch him off. Butch, Frida and Madge have nothing to fear.