The last time local pop superstar The Kid Laroi performed in Australia in 2019, he was the opening act for his late mentor and friend Juice Wrld. Taking the stage at venues hosting about 4000 fans, he felt he’d made it.

“I remember it felt like a big step up, like, ‘Oh, people know who I am now!’” the 18-year-old recalls from his studio in Los Angeles, where he’s been based for almost two years. “Looking back at it now in perspective, it’s like, uh, they really didn’t.” 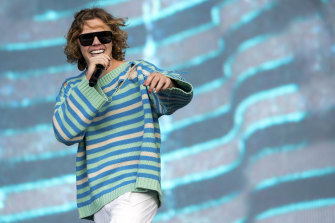 The 18-year-old Sydney rapper’s rise to global superstardom is already the stuff of big-screen biopics.

A handful of years ago, Laroi – real name Charlton Howard – was an average kid running around the streets of Redfern (as the now bizarrely scrubbed 2018 video for his Nonstop Freestyle showed). His return to Australia for his first official arena tour in May 2022 follows a journey that’s unprecedented for any local hiphop star.

“The fact that I’m doing my own arena tour at home? That’s like truly weird,” he says. “I definitely feel grateful and blessed but, I mean, it’s just crazy.”

Since releasing his debut mixtape F— Love in July 2020, Howard’s garnered more than 350 million streams in Australia and more than 3 billion streams globally. In February, he became the youngest Australian solo artist to hit No.1 on the ARIA albums chart, and in August, after two subsequent re-releases of F— Love that showcased his evolving chops, he topped the US’s Billboard 200 albums chart.

It’s perhaps understandable that the word “crazy” peppers his conversation. Last month he played an impromptu gig atop the Hollywood Palladium alongside his Stay collaborator Justin Bieber (“Seeing so many kids turn up on such short notice and going crazy to every song was crazy”), and also in front of almost 50,000 people at the UK’s Reading Festival (“I kind of blacked out on stage, but looking back at videos it’s like, ‘that shit was crazy’” ).

Similarly crazy is the extent to which he wished such dreams into existence. On YouTube exists an infamous video of Howard at 15 discussing his hopes of busting the hiphop ceiling that’s kept local rap stars “capped in Australia”.

“Oh yeah, this was always the plan,” he says matter-of-factly. “I dunno, I kind of never really thought of the whole, ‘What if it doesn’t happen?’ It was always, like, it’s gonna happen.” 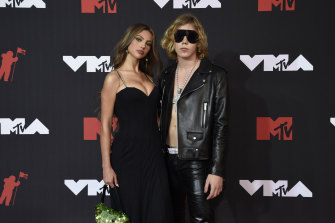 He says he inherited that mindset from his mother, Sloane, a talent manager whose struggles he touches on often in his songs, most affectingly on his track Pikachu where he mentions how she took to selling drugs for a period to pay for his schooling. (Howard’s mother and father Nick, a music producer, divorced when he was four.)

“She’s always had a real hustle mentality,” he says, “and just always told me if I wanted to do something that I can f—ing do it, you’ve just gotta work.”

Despite his international success, he’s kept an eye on his hometown’s ever-burgeoning hiphop scene. Last October he released a track called My City with Mount Druitt drill stars OneFour, and has plans in place to launch a local record label to refract his spotlight towards other up-and-coming Australian artists.

As he works further on his upcoming debut album (“I’m definitely experimenting with things, so it’s going to sound different to the other stuff I’ve put out but it’s still just me talking about my life,” he says of its direction), he’s also maintained his longtime working relationship with Sydney producer Khaled Rohaim.

“That’s my boy, my brother for life,” Howard says. “Even deeper than the music, when I had no money and was going through a tough time, when my family didn’t have a home and stuff like that, he would help me out, getting me jobs and, like, lots of money to write songs for people so I could give the money to my family and shit. That’s my brother forever.”

Only freshly 18, Howard finds himself in an intriguing position, having conquered the US from Australia and achieved a chart-topping mixtape and multiple singles at home. At this point, what even constitutes success any more and how far have those goalposts changed during the past two whirlwind years?

“I mean, I’ve always had a big goal and plan from the very beginning that I haven’t even executed yet, so I don’t think anything’s changed ’cause I’m still on my way to achieving it,” says Howard.

Wait, what? So what is he trying to achieve exactly?

“That’s why I try not to think about [the success] too much because I still always wanna have that same hunger and that same motivation. I’ve still got a lot more to do.”

Tickets for The Kid Laroi’s End of the World Tour go on sale on Friday September 17 via handsometours.com.