War of the roses! Moment eager wedding guest ‘savagely’ snatches the bride’s bouquet from another woman’s grasp and celebrates with a triumphant dance

Catching the bouquet at a wedding is seen as a sign that you’ll be next to walk down the aisle, and one woman was so eager to seal the deal that she ‘savagely’ snatched the blooms out of another guest’s grasp.

An anonymous Reddit user believed to be from the US, racked up over 2,000 comments on footage of the moment a woman wrestled for the bride’s bouquet.

‘Witnessed the most savage bouquet toss I have ever seen yesterday,’ wrote the user.

Responses to the post labelled the woman who snatched the flowers ’embarrassing’ and praised the reaction of the fellow guest for letting go of the bouquet. 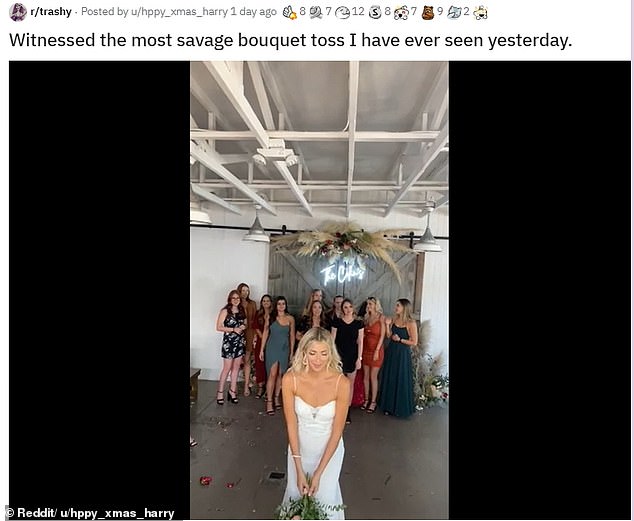 A video of a woman snatching the bride’s bouquet from a fellow wedding guest has gone viral on Reddit. Pictured: The bride preparing to toss her flowers 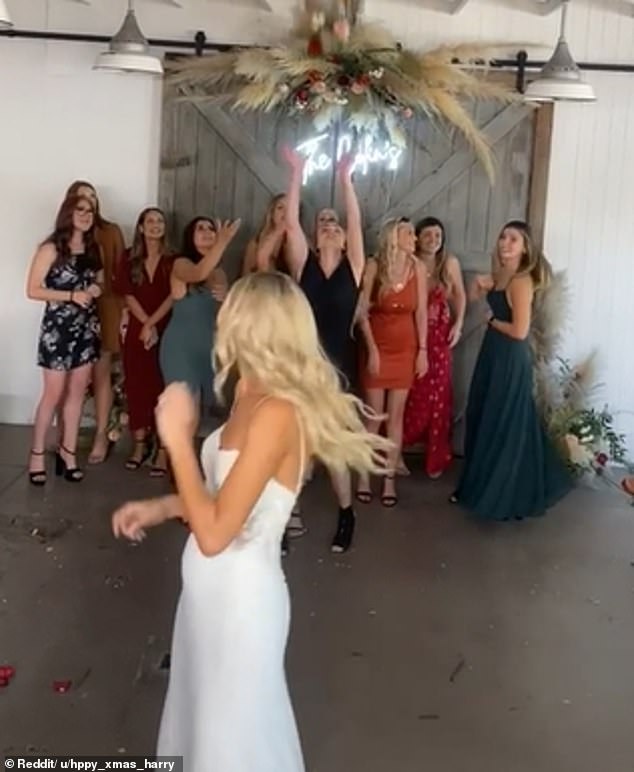 The tradition dictates that whoever catches the flowers will be next to walk down the aisle. Pictured: The wedding guest catching the flowers

The video shows the beaming bride with her back to a crowd of female wedding guests, as she throws her floral bouquet into the air.

A woman at the front of the group reaches her hands upwards and catches the flowers, however her moment of joy is interrupted when another woman rushes to grab the bouquet.

After pulling the flowers out of her hands, the triumphant woman holds them up in celebration but the shocked group slowly disperses in laughter.

Many responses to the post were unimpressed with the woman’s behaviour and admitted they cringed while watching the clip.

One person wrote: ‘The girl who caught it first was wise to just let it go and let the crazy lady have it lol’

‘That made me cringe. If I was her bf I’d be seriously embarrassed. Haha that is so trampy, feel bad for the woman who caught it first. If she didn’t let it go that savage would have probably pulled her hair or something,’ another said.

A third added: ‘SERIOUSLY, just watching this made me want to crawl under my desk.’ 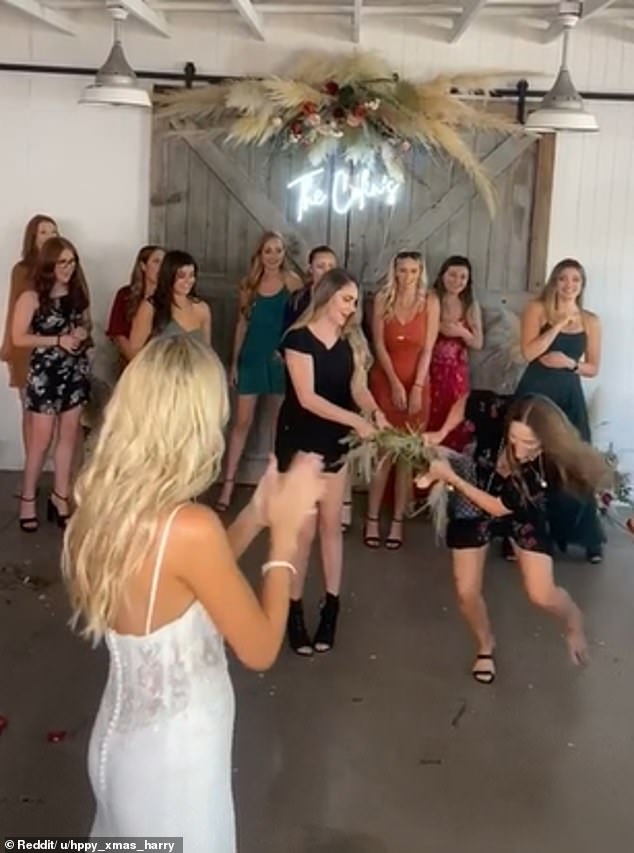 The woman is seen pulling the flowers from the guest’s hands (pictured), as others including the bride watch in shock

One person wrote: ‘Yeah things like this would make the wedding super f****** awkward. I was at one wedding helping with catering and all the girls lined up for the toss with taller in the back and shower in the front and some of the kids went too.

‘The bride turned around and tossed it to the kids in front and one of the bridesmaids reached out and stole it from probably a four-year-old girl. Was pretty awkward for a hot minute.’

Another said: ‘Went to a friend’s wedding with my ex and a friend of a friend bought this cray person. Anyways friend went to throw the bouquet, I was sitting off to the side and it ended up landing in front of me (she just tossed it blind).

‘All of a sudden, crazy girls comes stomping over with this legit terrifying look in her eyes and snatches up the bouquet from in front of me. Then she bounces over to the guy she came with all happy, while everybody stared. Dude was super embarrassed and they left shortly afterwards.’