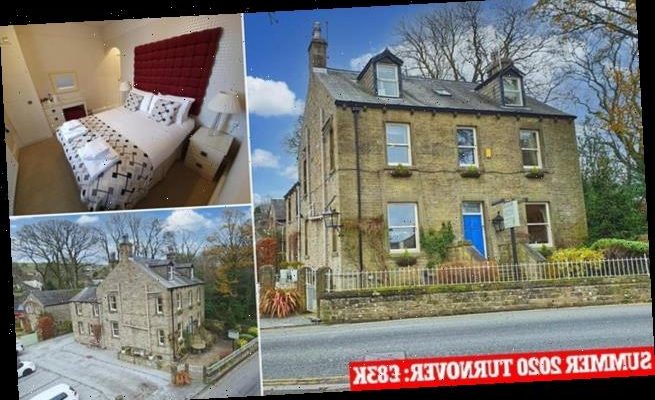 Can you cash in on the staycation boom and move home? From Wales to the Yorkshire Dales, four properties for sale with holiday businesses attached

Being the owner of a holiday letting business or guest house in Britain has been a financially depressing state of affairs during the past year.

Repeated lockdowns mean that bookings have had to be postponed or cancelled while people stay at home, barring a surge when the economy was opened up last summer.

But has Boris Johnson’s plans for the lifting of the latest lockdown changed all of that?

With holidays overseas still on hold, the staycation market has been given a massive boost by the announcement that these holidays are set to be allowed from the middle of April. 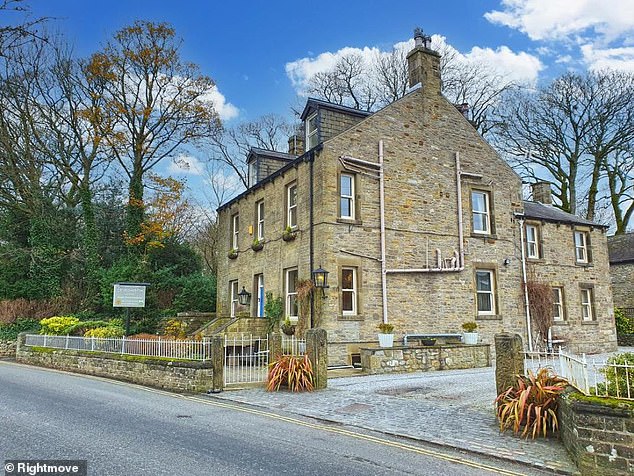 This Yorkshire Dales guest house generated an income for July, August and September last year of £83,300 including VAT (more details and pictures below)

Staycation giant Awaze, the owner of UK self-catering company Cottages.com, said it sold a record 10,000 breaks on February 22 – the day that the roadmap out of lockdown was announced.

Camping site Pitchup.com, meanwhile, took one booking every seven seconds in a 24 hour period during the week of the roadmap announcement.

And Habitat Escapes, which offers luxury holiday in the Cotswolds and Dorset, said that within 24 hours of the Prime Minister’s announcement, sales were up 343 per cent compared with the previous week, and a staggering 9,559 per cent up on the same day last year.

While this was before the Prime Minister’s roadmap announcement, there was already mounting speculation that he was going to make a statement.

Rightmove said the second busiest day for the commercial section of its website was the day before on February 20, with all of the top 25 business days for commercial property recorded in January and February this year.

A boost for staycations

The roadmap out of lockdown that was announced by Boris Johnson last week has been welcomed by the British tourism industry.

While it has acknowledged a ‘slow build back’ for tourism at home, it says that the vaccine and roadmap is ‘encouraging’ for the industry.

Patricia Yates, of VisitBritain/VisitEngland, said: ‘The PM’s roadmap announced on 22 February brought some welcome clarity on time frames for restarting domestic tourism in England and for businesses to start planning towards reopening.

‘News of the vaccine progress and the July target is particularly encouraging for England’s tourism industry and the millions of jobs and local economies that depend on it, especially coming in the run up to the critical summer season.

If you’re considering buying a holiday lets business, it is important to do your research thoroughly.

This includes finding out what the business’s revenue, cashflow and profits are – and whether they are sustainable once you take it over.

Many business do not list these details on their website adverts, preferring to keep them private until they are approached. (Indeed, all bar one that we spoke to retained this information for serious buyers only, once viewings had been carried out.)

This information is particularly sensitive at the moment given many hospitality parts of the economy have been shut for the best part of a year.

Once you approach the sellers for this information, if they fail to provide plenty of documentary evidence, it may be better to walk away.

Most residential properties with business attached require a commercial mortgage, which require a deposit of around 30 per cent of value of the bricks and mortar, while other lenders will lend up to 65 per cent of the total purchase price – which includes the house as well as the value of the business.

Commercial mortgage rates also tend to be higher than those available on residential deals, at around 4 and 5 per cent.

Most lenders will also want to see some evidence of experience of working in the sector, or relevant business expertise.

So what could you buy? Below is a selection of some residential properties with holiday lets attached. 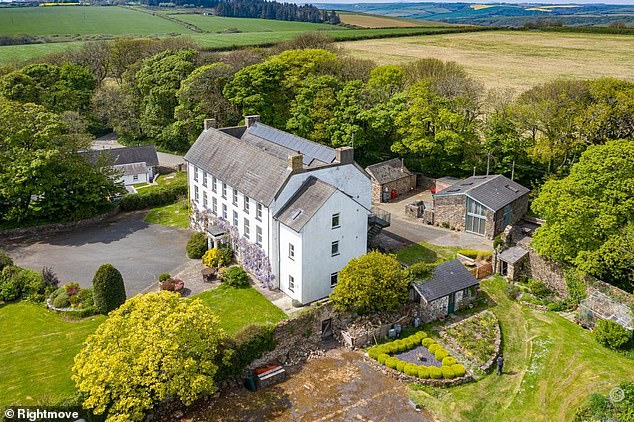 This beautiful Grade II listed Welsh guest house in Cuffern, Pembrokeshire, is for sale for £850,000 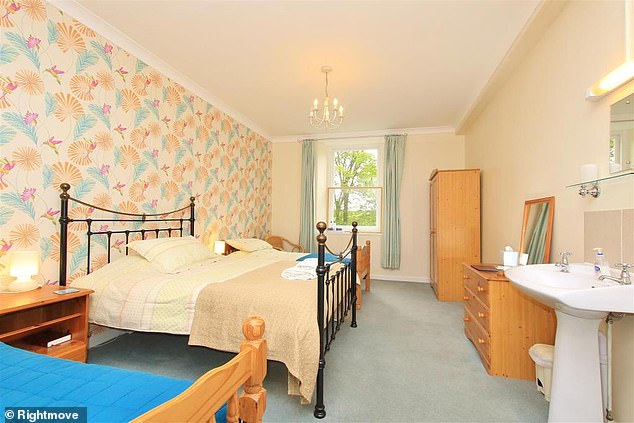 This Grade II listed house in Cuffern, Pembrokeshire, was built in 1770 and is less than four miles from the beautiful Welsh spot of Newgale beach.

It includes two self-catering cottages, and generous owners’ accommodation. It is for sale for £850,000 via estate agents West Wales Properties. 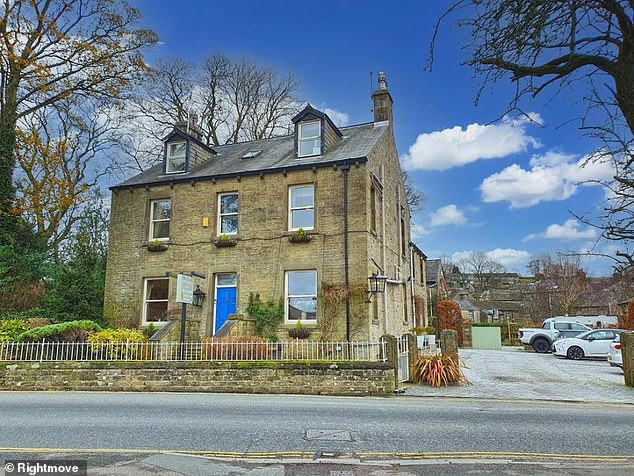 This 12-bed guest house sits in the Yorkshire Dales National Park village of Grassington and is for sale for £925,000 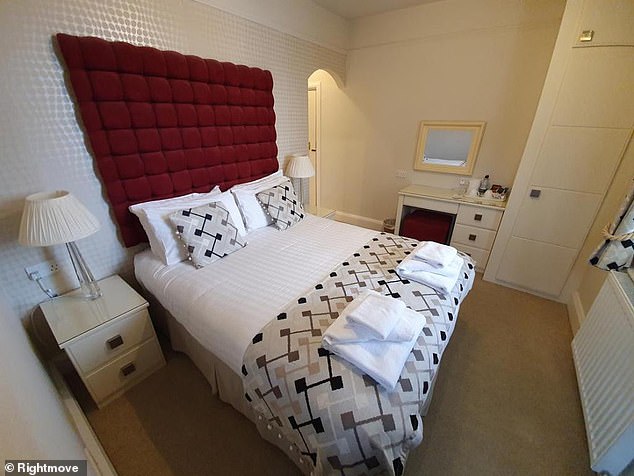 This 12-bedroom guest house sits in the Yorkshire Dales National Park village of Grassington, Skipton, and is currently for sale for £925,000 via estate agents Christie & Co.

The main guest house has 10 double bedrooms and is owned freehold by the sellers. There are two further bedrooms in a separate building across the car park that are held on a leasehold basis.

It had a turnover of £155,000 for the year ending March 2020 and enjoyed a strong summer last year, with income for July, August and September amounting to £83,300 including VAT.

Further information about the accounts can be provided to serious buyers only. 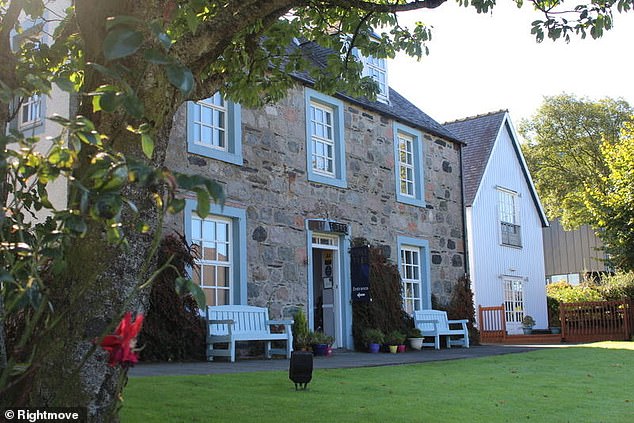 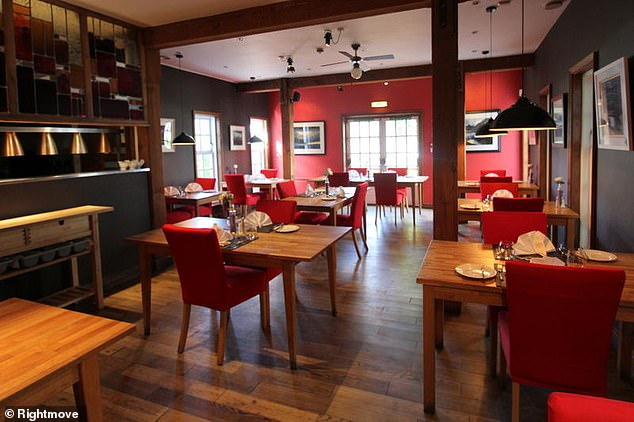 The property has nine letting bedrooms, as well as income from a gallery, self-catering and evening meals

Lime Tree Hotel in Fort William, Inverness-shire, is a traditional Victorian country property that dates back to 1850.

It currently has nine letting bedrooms, as well as income from a gallery, self-catering and evening meals.

The property’s asking price is £895,000 and the sale is being handled by estate agents ASG Commercial. 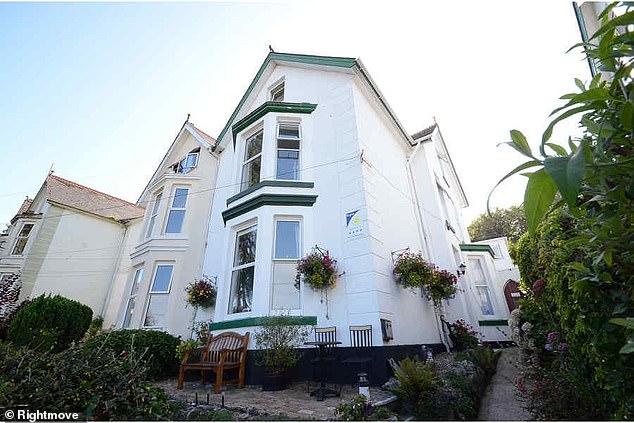 This nine-bedroom Victorian guest house is in the pretty fishing village of Brixham, in Devon 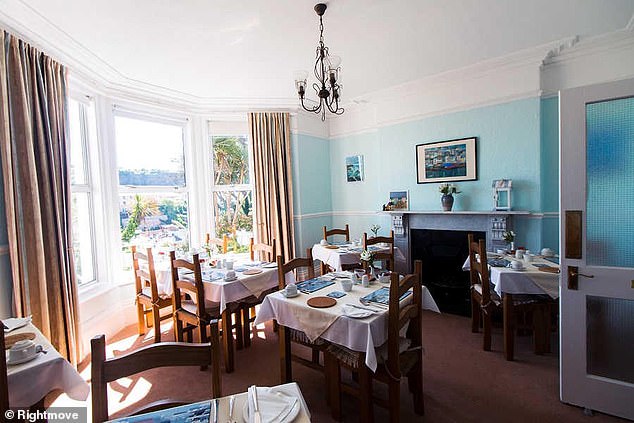 The large dining room has a bay window and space for seven  tables, and chairs for 14 covers

This nine-bedroom Victorian guest house is in the fishing village of Brixham, Devon, and boasts harbour and sea views. It is for sale for £565,000 via estate agents Ware Commerical.

There is a six-bedroom guest house, as well as a one-bedroom holiday chalet and two-bedroom owners’ accommodation.

If you are looking to buy a holiday let and require a mortgage, you will need a specific type of loan aimed at such properties.

One lender offering such deals is Leeds Building Society, which launched two new holiday let products following its biggest month on record for this type of mortgage application in September last year.

In anticipation of growing demand this summer, the lender has expanded its range of holiday let products with two five-year fixed-rate deals with no product fee

They include a five-year fixed-rate mortgage available up to 60 per cent of the value of the property, with a rate of 3.69 per cent.

And separately, there is a five-year fixed-rate mortgage available up to 70 per cent loan-to-value, with a rate of 4.29 per cent.

Matt Bartle, of Leeds Building Society, said: ‘The ongoing uncertainty around international travel restrictions adds to the likelihood that more Britons will be holidaying in the UK this year.

‘We’ve seen increasing demand in holiday let lending in recent years, including by buy-to-let landlords looking to diversify their portfolio.

‘It will be interesting to see if holidaymakers’ habits change once they’ve experienced, or been reminded of, what the UK has to offer, whether for short breaks or longer stays.’