Throughout the run of Game of Thrones, Brienne of Tarth has been shown to be one of the most formidable warriors in Westeros, but a moment in the most recent episode has fans wondering whether her future will take an unexpected turn. Spoiler alert: This post contains spoilers from Game of Thrones Season 8 Episode 4. After seasons and seasons of flirting, Brienne and Jaime Lannister finally acted on their romantic feelings, but now fans are left to wonder is Brienne pregnant. Let’s break down how this moment could hugely change Brienne and Jaime’s future.

After the war and bloodshed of last week’s Battle of Winterfell, viewers got a nice surprise with a bit of partying at the beginning of this Sunday’s new episode. To celebrate their big victory, everyone in Winterfell took a moment to chug some win and play some party games. We get to see Brienne, Jaime, Tyrion, and Podrick joke around and get drunk playing a drinking game where you have to guess facts about one another. But the revelry takes a turn when Tyrion guesses that Brienne is a virgin, and she storms off leaving both of her suitors — Jaime and Tormund — to try to come up with game plans. 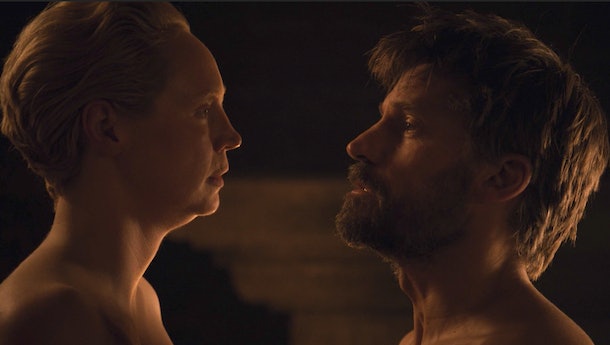