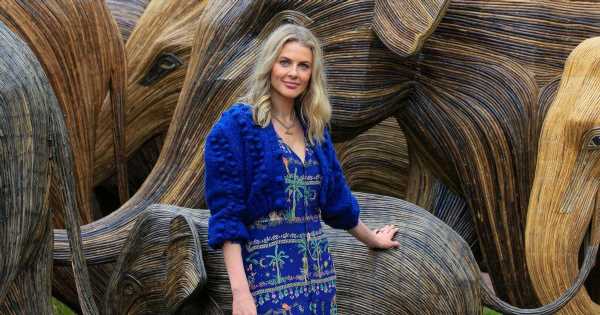 Actress Donna Air gave her fans a look inside her spacious space inside her Cotswolds barn conversion in a short video on social media.

The TV star, 42, who designed the home herself, showed off her favourite room in the house, the spacious living room which was decorated in shades of cream and taupe as well as a splash of terracotta used on one of the sofas.

“It used to be a tractor showroom-an old barn which was probably left derelict for over 50 years,” Donna said, as she revealed that the living area is her favourite room in the house. The actress was keen to show that the house had been decorated with the environment in mind.

“Everything in this room has been recycled, upcycled,” she said.

Donna went on to explain that her black wrought iron stairs had come “from an old spitfire machine gun factory.”

The presenter designed her Cotswolds home with the help of luxury British interiors brand OKA. Describing her interior style as “very eclectic” Donna also revealed that she loves “colour” and “warmth” and “relaxed, comfortable, organic.”

Another statement piece in Donna’s home is the 150-year-old copper bath that is featured in the mezzanine level bedroom. “It was sourced from a derelict French castle,” Donna explained.

Donna revealed that she fell in love with the barn conversion because it was “so unusual.”

"The integrity has been brought back to a very old building,” she said. Donna revealed that what she liked about the house was that "every piece had a story.”

Although the house features a lot of recycled and upcycled pieces, there are new pieces such as the fireplace in the living room. Other striking features include the pendants lights hanging over the dining table and the cream bubble style lights.

On OKA’s website, they describe Donna’s home as a “harmonious blend of old and new design elements; a peaceful place to unwind and enjoy the surrounding countryside.”

Fans are not only treated to a video tour of her new home but are shown how to get the look themselves. Donna, who has a 17-year-old daughter Freya, with multi-millionaire animal conservationist Damian Aspinall, is a former BBC Breakfast host and has taken part in such shows as Celebrity MasterChef, Dancing on Ice and Splash!

Donna also featured in the BBC divorce drama The Split.

The actress was previously in a relationship with the Duchess of Cambridge’s younger brother, James Middleton.