Apple TV+’s new scripted series Mythic Quest: Raven’s Banquet is set at a fictional American video game studio that steers and sells the world’s most successful online game. It’s a story of office rivalry, conflicted ambition, and commercial demands where the terrific ensemble cast might have to deal with white supremacists massing online or the reality of the many millions of users having their personal details hacked. Naturally, it’s a comedy.

Nowadays it’s as if the workplace is a setting where only punchlines and pratfalls are possible. The workplace drama, where the world was defined – and often put to right – between the hours of 9am and 5pm on a Monday to Friday has slipped away, like an RDO sacrificed in a negotiation. Shows set at the workplace, however flashy the digs, are now the home of cynicism and satire. The characters just want to clock in and talk back. 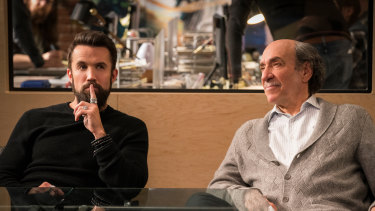 Of course there are exceptions to this long gestating trend. Even when we all have individual streaming services wired directly into our brains (i.e. about eight years from now) there will still be police shows where the station is a bulwark of struggle, despite the delirious best efforts of Brooklyn Nine-Nine. Likewise the hospital will forever be catnip to creators who want to revive hearts with both defibrillators and torrid romance: Grey’s Anatomy is eternal.

At least Mythic Quest: Raven’s Banquet, which comes from a trio of key voices involved in the demented dirtbag comedy It’s Always Sunny in Philadelphia, features some actual work. The mechanics of the game, and the technology that underpins it, are actually integral to the storylines, which spin off from the friction (and mutual need) between a narcissistic creative director, Ian (Rob McElhenney) and his frustrated Australian lead engineer, Poppy (Charlotte Nicdao). Their jobs are the anvil on which they hammer each other.

One of the first prime-time shows I watched weekly while in high school was L.A. Law, a Steven Bochco legal drama that would move nimbly between social issues and – for the mid-1980s – suggestive flirtation; a recurring element was a mythical sexual position known as “the Venue Butterfly”. The lawyers – shout out to Susan Dey and Harry Hamlin – dealt with a plethora of issues but the comic quirks rarely detracted from their dedication. 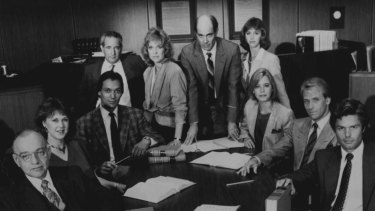 The classic workplace drama, as distinct from soaps and their villains, presented employment for the most part as a means to do the right thing. That matched a society where many people held the same job or worked at the same place from when their education finished to retirement. The gold watch episode, where a craggy supporting character was ushered out the door, often against their wishes, was a writers’ room staple.

That stability is increasingly rare. Whether through entrepreneurial zeal or economic anxiety, people don’t expect to have a lifelong workplace or a settled job. This century we’re getting the shows that reflect that. If you’re not emotionally invested in your own employment you’re far more likely to be receptive to a comedy where the characters have a similar outlook. Perversely, a successful workplace comedy rarely dispenses with a character, creating a sense of stasis on the screen, but their younger audience have no such illusions.

As with the Golden Globes, blame Ricky Gervais. When he and Stephen Merchant introduced The Office in 2001 it felt like a turning point for how television related to the workday. The Slough branch of the Wernham Hogg paper company was soul sucking drudgery, complete with Gervais’ nightmarish boss David Brent, which the staff had to endure. The American remake, more winsome and dedicated to everyday escapism, codified that transition. No-one came to work at Dunder Mifflin to improve the world, but encasing a colleague’s stapler in jelly was a definite possibility. 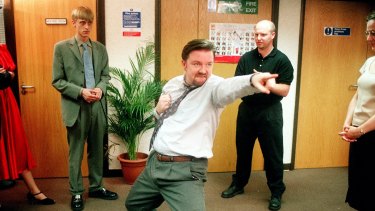 Ricky Gervais in the original version of The Office.

Perhaps it’s a matter of space. The workplace comedy thrives in an open-plan layout, where mismatched colleagues can’t help but overlap with each other and butt heads. It’s like a schoolroom for adults, usually complete with the class clown. By contrast the 1960s setting for Mad Men, which took the workplace drama to dark, interior realisations, was built around the office. Many of the characters treated their space as a redoubt, full of secrets to be held onto. Matthew Weiner’s drama knew that work was no laughing matter.