BURGER King and KFC are short changing customers by underfilling packets of fries by nearly 10 per cent.

A Sun investigation found that staff at the two fast food chains do not always meet size guidelines set out by head office. 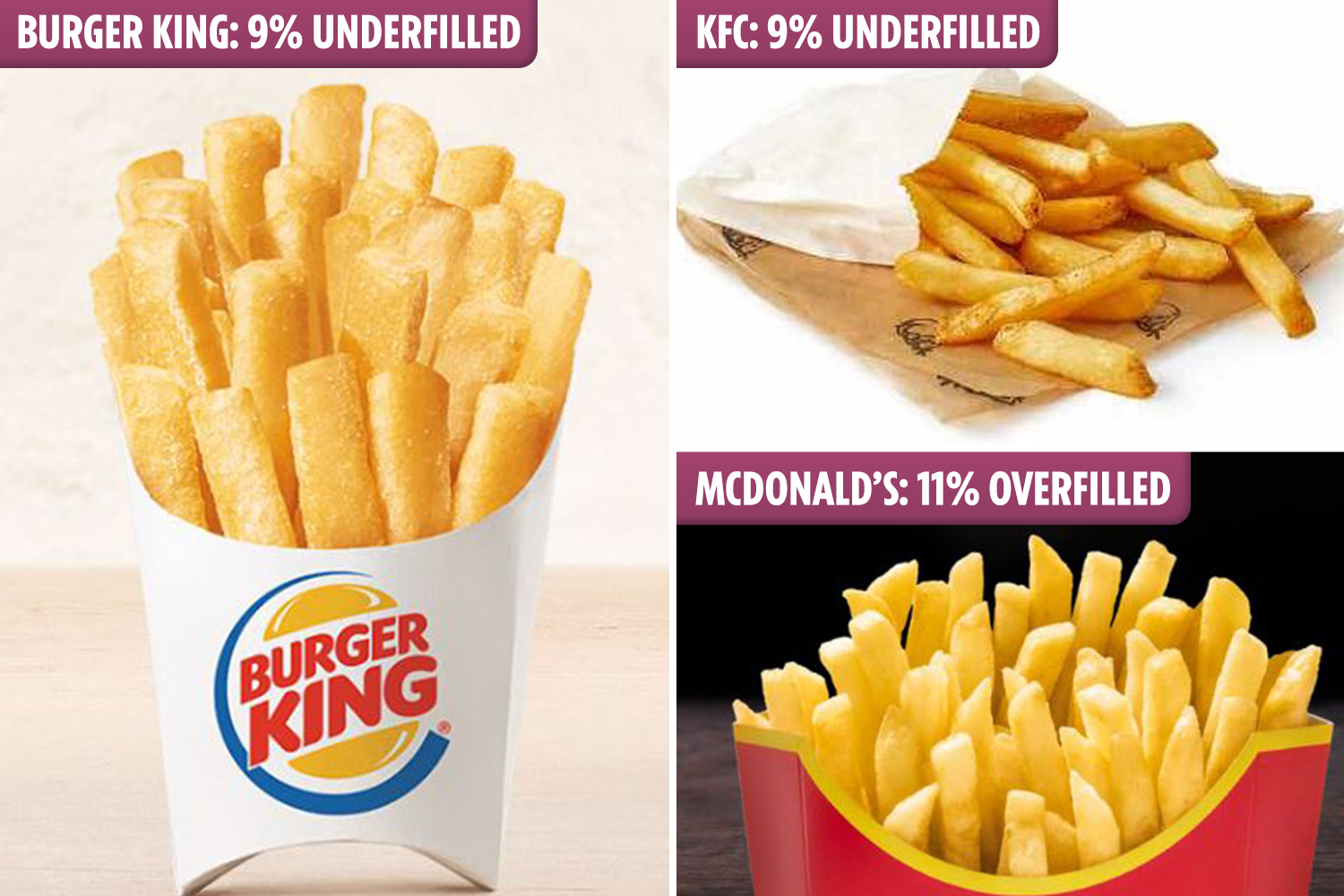 KFC's standard portion size for its regular fries is 115g, while at Burger King, it's 116g.

But when The Sun bought three samples of regular fries from three different central London branches of each fast food chain, our packets were underfilled each time.

It was a different story at McDonald's. 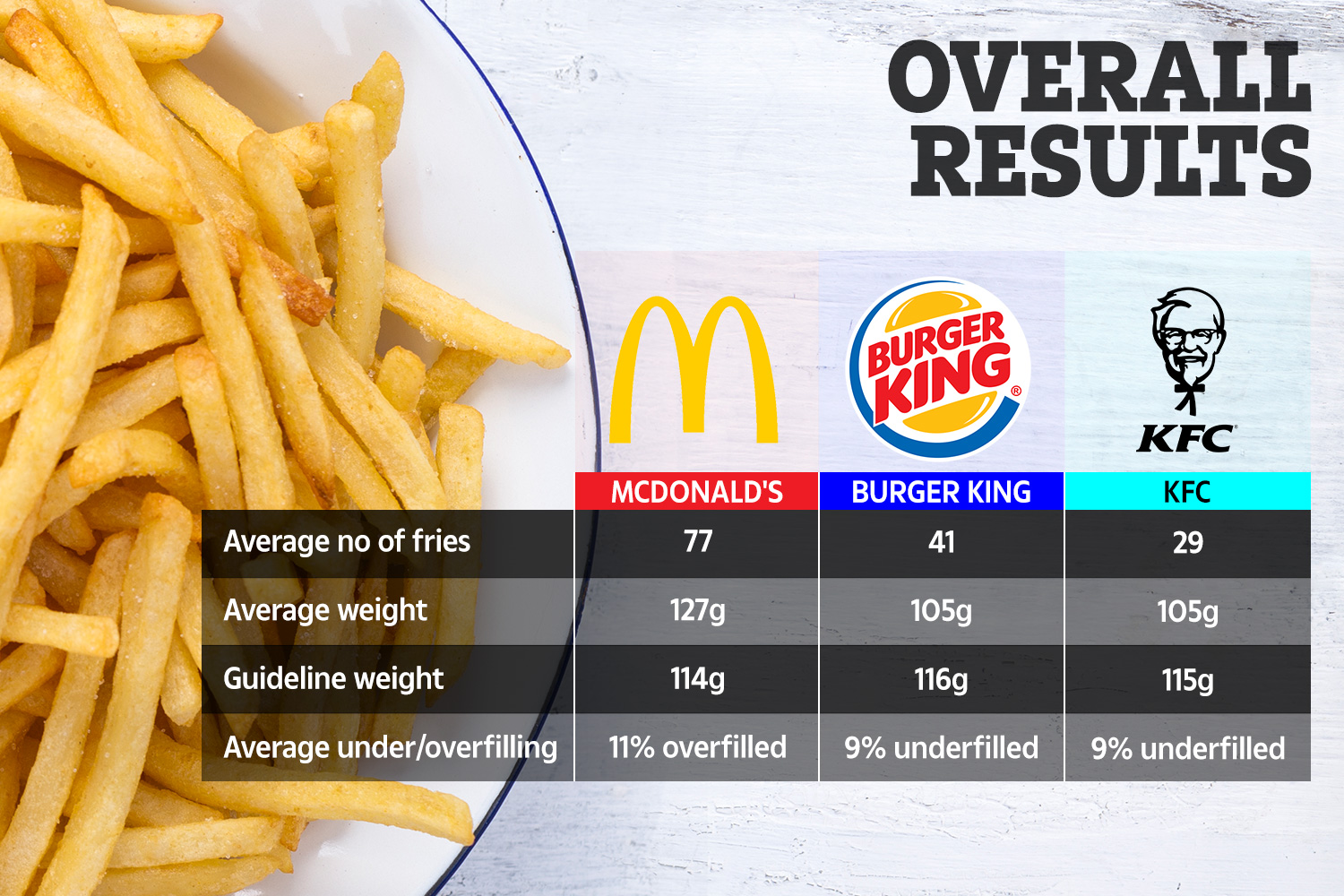 One packet was overfilled by 21 per cent, while another had 14 per cent more fries than in the chain's standard portion size.

The company's UK guidelines state medium fries should weigh about 114g but one packet was 138g when we put it on the scales.

The chain slightly underfilled a third sample, but the chain still overfilled our chips by 11 per cent on average.

McDonald's fills packets with roughly twice the number of chips as KFC and Burger King, with an average of 77 per medium size packet, according to our test.

That compares to an average of 41 fries at Burger King, and 29 at KFC, we found. 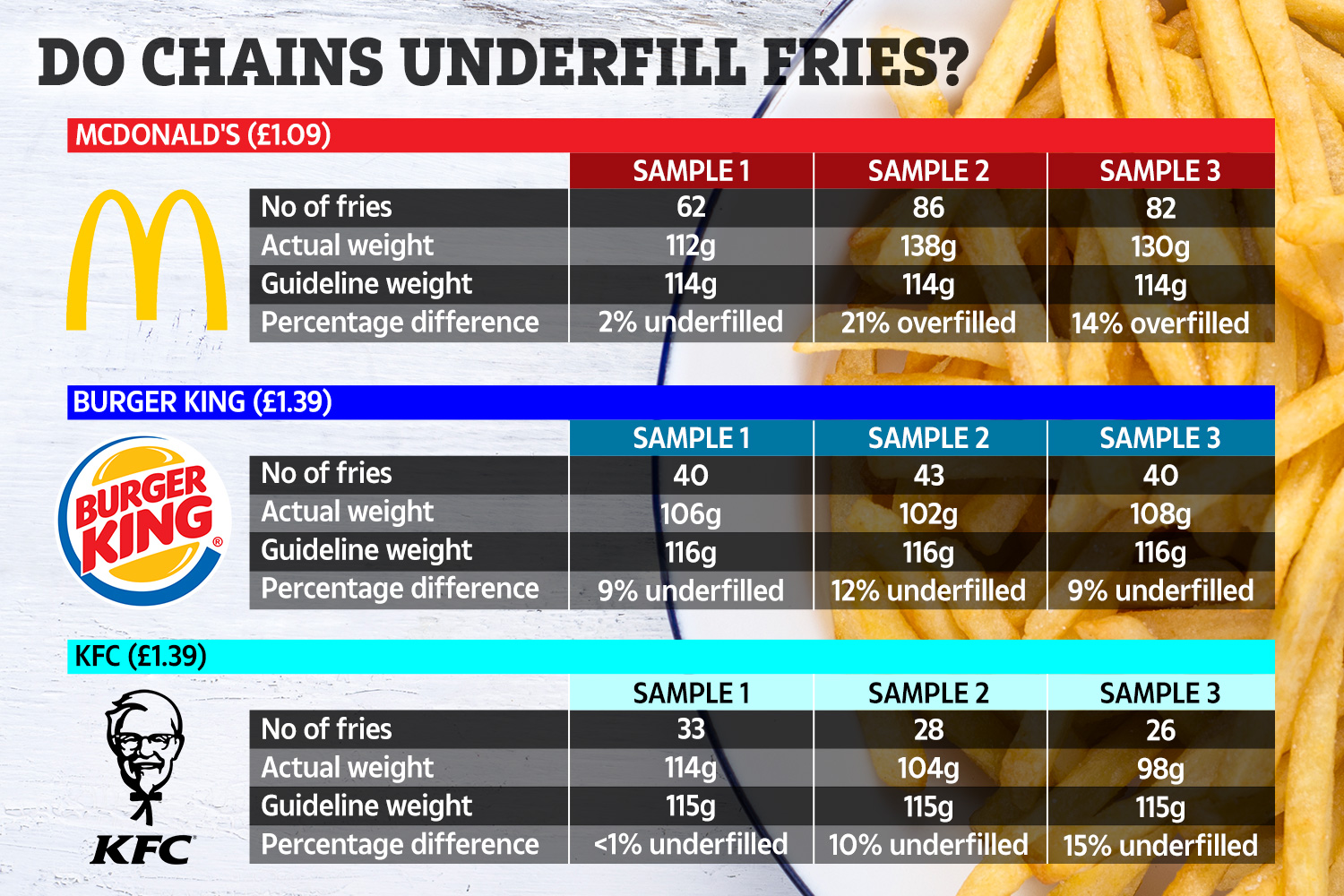 KFC and Burger King's chips are chunkier than McDonald's famous skinny fries, so you get more potato in fewer chips.

Even so, packets of fries at McDonald's weigh more on average than at Burger King and KFC, our spot check found.

But McDonald's regular fries – which are 30p cheaper than its rivals – weigh 127g on average.

A KFC spokesman said: "We know how much our fans love our chunky fries and we’d never intentionally give them any less than they’d expect (and deserve!), but if our fans ever feel like they’ve been short-changed, we’d encourage them to ask our team members who’ll be happy to top them up."

A McDonald's spokesman said: "We love that our world famous fries continue to be so popular, and offer our customers such great value for money."

The Sun has contacted Burger King for comment but we haven't received a response yet.

People can go crazy over fries – Aldi has had to restrict customers to two packets of its halloumi fries in some stores.

Meanwhile, KFC has launched a new burger with two layers of bacon and baconnaise sauce.

You can also get £3.80 worth of KFC food for just two quid at the moment.