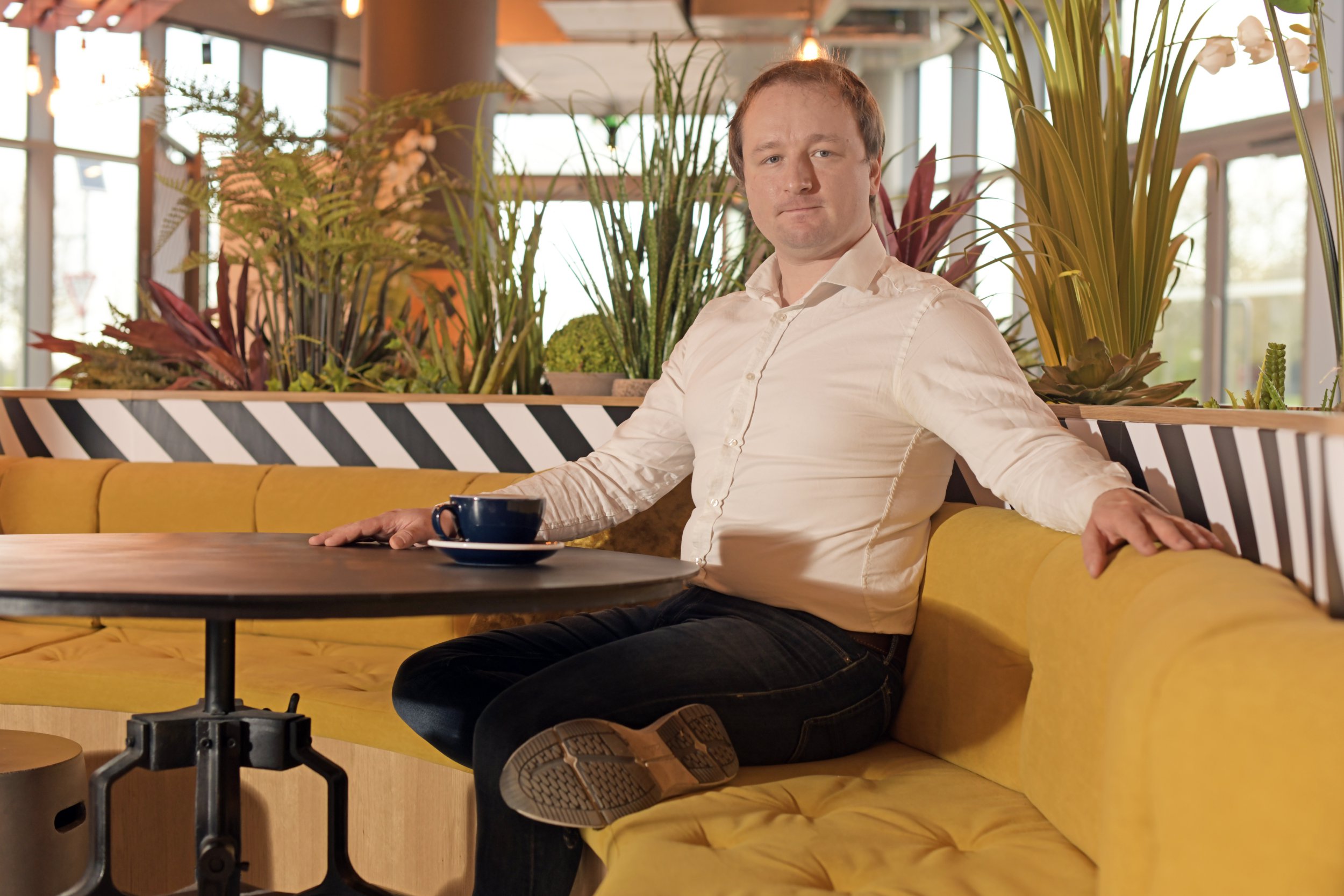 The name Harry George may not resonate with you, but if you live in London, there’s a high possibility you’ve visited an establishment he was behind.

Harry is Mr. Coffee and, by the age of 29, has helped build no fewer than 70 coffee shops across the capital and beyond in just six years.

Enough of a success story, right there, you might think. But not for Harry.

‘I got really good at building these places; setting them up, building the energy up,’ he says. ‘I spend a year or two on it but then I tend to lose interest.

‘I love the idea of building something new, but then get bored. It wasn’t making me happy.’

It was a chance encounter that led to a change in direction.

‘There was this homeless guy called Ian who used to come into one of my shops. There was a hostel nearby where he stayed and we’d give him free coffee and have a chat.

‘He was fresh out of prison and didn’t have any family so we offered him a job. I spoke to the manager of the hostel and arranged to pay his rent directly from his wages.

‘We helped him get himself back on track, then I helped him move into his own flat. I think at the time it was the best day of my life. It was his day, it wasn’t my day, I was just a guest in it, but I’d helped make it happen.

‘I got really into that side of things after that, then someone put me in touch with this guy who’d been offered a contract with the Ministry of Justice to train young offenders in Aylesbury Prison. This guy wasn’t an industry person and needed somebody that was to come in as a partner and help build it. I jumped at it.

‘We built something pretty special. I was on-site every day training these guys. There were ten inmates we worked with who were in for serious things. What we were doing worked. Just one of the guys we worked with re-offended, and everyone we worked with now has a job in the industry. That’s no mean feat.’

The experience taught Harry a lot but in September 2019 he decided to set out his own stall, this time in the not-for-profit sector. A scheme was piloted with Newham College working with ten students with Special Educational Needs & Disabilities (SEND) and, at the start of 2020, SEND Coffee was officially founded.

‘I have a disability myself — dyspraxia — and have never brought it up, yet it’s something that directly affects me when I’m making coffee.

‘Since starting SEND Coffee, I’ve had people in the industry saying to my face, “Nobody with a disability can do coffee at a level that I need.” I tell them I’m sure I can prove them wrong. I’d say, “As someone with a disability, I’m pretty sure I’m better than any of your staff at making coffee.”’

The scheme provides one-to-one training — by high-calibre industry specialists — with each learner for a full year, not only providing them with high-level industry knowhow, but also teaching them important life-skills, as well as spending a further year helping to find job placements with lucrative discounts offered to wholesale customers willing to take a chance on one of their young baristas.

‘Our aim is to break down the stigma. We bring people in and they see the shop and the beans in action. They don’t realise their barista is disabled. They see what they’re capable of doing in terms of coffee quality, then the fact they have a disability is way less of a problem if they can make coffee like that.

‘We are training to competition standard. Not just making coffee but understanding TDS meters, extraction, chemical compounds and latte art.

‘We get them to a quality level then they choose their own path after that. Our other primary goals are achieving independence; getting dressed, going to work, eat, shopping independently, cook for themselves. They can achieve that with this training as a vehicle. The focus becomes life skills. We work with a very broad range of disabilities. Everyone coming onto the course should expect to progress to a job. We won’t give up on anyone.

‘We had a really good start to 2020 expanding to six sites that satellite around the college in East Ham. Never could I have predicted Covid would set the world on fire.’

Despite the difficulties faced by the entire hospitality trade over the past year, training has continued on-site (when permitted) and remotely. Harry takes on a local business partner at each location — the ‘real owner’ in his words — allowing him to focus on the training. It also means that each shop looks and feels like a standalone business with its own branding and style.

All ten of the inaugural students completed their training receiving Health & Hygiene and SCA (Specialty Coffee Association) Training Certificates. Seven have jobs which considering Covid, Harry is very pleased with. There are seven new students on the current course.

Further expansion and partnerships are in the pipeline, although ‘never more than ten shops’, Harry insists with a smile. ‘I want to be the go-to in the industry. If you need a great barista, go see Harry. They might have a glass eye, or occasionally need to sit down, but they’ll be phenomenal.’

‘I wouldn’t be talking to you without SEND’

AMONG the first SEND Coffee graduates is 20-year-old Raheem Yasseen, who learnt the ropes at Harry’s Camden shop.

‘I wouldn’t be sitting here talkingto you without SEND Coffee,’ says Raheem (pictured) bluntly. He has autism, the effects of which can leave him feeling extremely nervous about social interaction.

‘My confidence has improved a lot. I would get scared to approach people; to talk to them because of my autism — but speaking to customers, to my colleagues, going out with my classmates has actually fixed my whole confidence.’

He has learnt skills and processes such as tampering, timings and weights as well as where coffee is grown and the conditions needed for preparing roasting and drying good-quality beans.

‘When I was told about this course I was getting nervous,’ he admits. ‘A lot of disabled and autistic kids need this encouragement.

‘My family never thought I would work in a café or communicate with people. They can help a lot of autistic kids to open up their character.

‘My confidence has increased tons. Last year I would be crying. I wouldn’t be able to talk to you. It’s changed my life. It feels totally amazing to be one of the first to do the course.’

Raheem is currently employed at a large supermarket, but has plans to open his own chain of coffee shops.