A ban on all flights from India could be put in place within days under a suite of options the Australian government is considering in response to the country’s worsening COVID-19 outbreak.

The National Security Committee of Cabinet will on Tuesday discuss temporarily halting all repatriation flights out of India, which would prevent thousands of Australians – including cricketers in the Indian Premier League – from getting home. 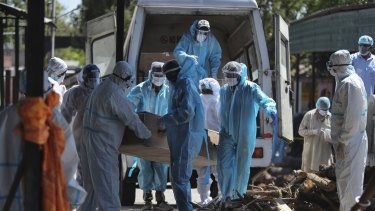 Health workers and relatives carry the body of a COVID-19 victim for cremation in Jammu, India. Credit:AP

Australia will also most likely send oxygen, ventilators and personal protective equipment to India as part of an immediate support package to be announced on Tuesday. It will not send vaccines because of its own supply issues and the fact that India has ramped up domestic manufacturing of vaccines.

Infections in India over the past week have surged to the highest level of any country in a seven-day period, adding 2.2 million cases, double the number of cases in the United States during its January peak.

The country added 352,991 cases alone in the past 24 hours, with 2812 deaths, but there are fears the death toll could be much higher with limited data being kept at mass outdoor crematoriums.

Priyanka Kishore, an India analyst at Oxford Economics said “deaths are now doubling every ten days”, as opposed to an average of 29 days in the first wave, and this figure was still likely to be buttressed by delayed or under-reporting of deaths.

Foreign Minister Marise Payne, Australia’s ambassador to India, Barry O’Farrell, and officials from the Health Department, the Department of Foreign Affairs and Trade and the Department of Home Affairs have been locked in discussions over recent days on how to deal with the crisis.

The Indian government has named medical oxygen as a priority with COVID-19 patients in the country suffocating amid low supplies.

Prime Minister Scott Morrison last week announced a 30 per cent reduction in flights from India, but Australian authorities are now considering whether a total ban is needed for a period of time.

The government has been running repatriation flights through Qantas and Air India, but these would come to a halt under the proposal to be considered by cabinet’s national security committee. 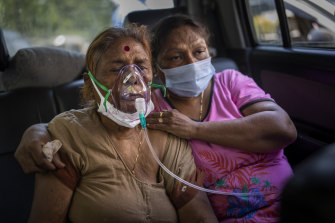 A COVID-19 patient receives oxygen inside a car provided by a Gurdwara, a Sikh house of worship, in New Delhi.Credit:AP Photo/Altaf Qadri

Health Minister Greg Hunt confirmed on Monday that Australia would likely provide ventilators and did not rule out instituting a flight ban.

“India is literally gasping for oxygen,” Mr Hunt said. “And while we can assist with the national medical stockpile, their particular request is for assistance with regards to the physical supply of oxygen.

“We are in a position to be able to supply non-invasive ventilators. We are in a strong position on that front because won’t need them at this point in time.”

The United States, Europe and Britain will also send emergency supplies to India over the coming days.

Dr Pradeep Taneja, a fellow of the Australia India Institute at the University of Melbourne, said members of the Quad alliance, which includes Australia, the US and Japan, needed to step up to provide urgent medical to India.

The Quad was formed after the Boxing Day tsunami in 2004 as a vehicle to mobilise resources between the four countries and coordinate their delivery.

“I think it would be it would be seen as very surprising if Australia tomorrow did not clearly make some quick decisions on this,” he said.

Dr Teneja said members of his family in Delhi had contracted the disease but were so far only exhibiting mild symptoms, while former university colleagues of his had died from COVID-19.

“Almost daily, I’m hearing about one or two people who have died as a result of the coronavirus,” he said. “It’s a terrible, terrible situation.”