Federal Health Minister Greg Hunt remains confident in Queensland’s ability to contain an outbreak that could have spilled over the border into NSW.

The federal government has decided against declaring a hotspot over the Queensland outbreak so far, but the Australian Health Protection Principal Committee will meet on Monday afternoon to discuss those developments. 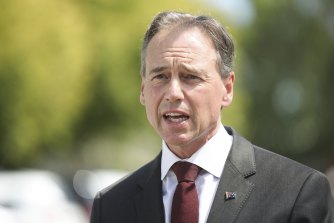 “I have confidence in Queensland’s ability to deal with this outbreak,” Mr Hunt said. “I think they’re in a strong position to protect Brisbane and Queensland and, thereby, Australia.”

There are fears COVID-19 may have spread from Queensland into NSW after two people travelled to Byron Bay while unknowingly infectious.

Two new Queensland cases – a nurse working on a COVID-19 hospital ward and her sister – visited popular Byron venues with holidaying Sydneysiders before they tested positive for the virus.

The sisters were among four new locally acquired cases reported in Queensland on Monday morning.

Greater Brisbane will enter a three-day lockdown from 5pm on Monday following the increase in cases, as the local cluster grew to seven.

Mr Hunt said the federal government has authorised asymptomatic testing across the Brisbane region, which was already under way through Commonwealth respiratory clinics. Asymptomatic testing was also being carried out through aged care facilities.

Vaccinations are considered a critical reason to leave home, so people should not cancel vaccine appointments during the Brisbane lockdown, Mr Hunt said.

Mr Hunt said the Commonwealth had already provided Queensland with a “large inventory” of vaccine doses and so far would not be looking to send extra doses.

“We’re distributing everything that we can,” he said.

“Already we’ve distributed over 106,000 doses to Queensland and to their credit, they’ve already administered 59,000 of those, so there’s a significant amount which has been distributed just to that state.”

“The latest guidance I have is we remain on track for all the first doses before the end of October,” he said.

In the US, 143 million doses of COVID-19 vaccines have been administered. More than 51 million people have been fully vaccinated, either with the Pfizer, Moderna or Johnson & Johnson vaccine.

In the UK more than 29 million people have had at least one dose of a coronavirus vaccine. The UK is aiming to have at least 32 million vaccinated by April 15.