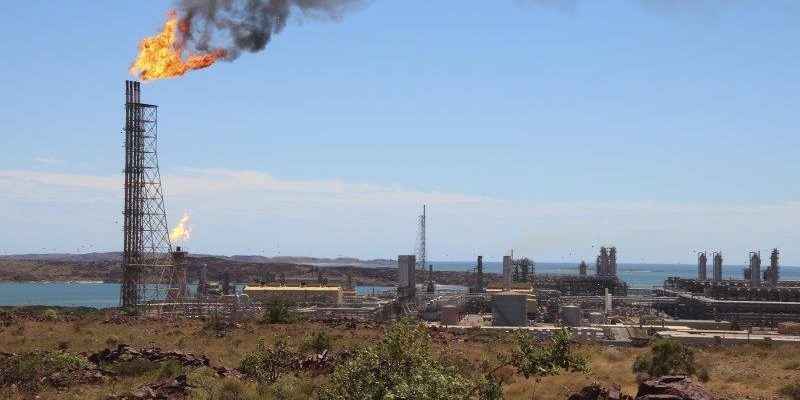 The Bush administration’s decision not to ratify the Kyoto Protocol to reduce America’s greenhouse gas emissions prompted fears in the Howard government the move would undermine global efforts to curb climate change.

Previously secret cabinet documents from 2001 released by the National Archives also show concerns within the federal bureaucracy that Australia’s high per capita greenhouse gas emissions could be exposed by the ongoing global debate over key elements of Kyoto. 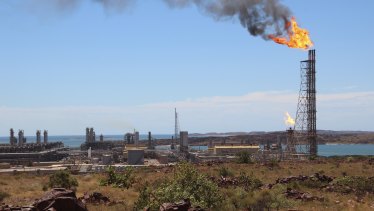 Woodside’s Pluto LNG plant near Karratha in WA. Cabinet papers from 2001 show the government’s concern over greenhouse policy, here and in the United States.

And they show the divisions within the Howard government over the approach to climate change – divisions that continue today within the Coalition.

While Australia had signed the Kyoto Protocol – under which it agreed to limit the nation’s emissions increase to 8 per cent above its 1990 levels – in 1998, the Howard government did not ratify the agreement. That would be one of the first actions taken by the government of Kevin Rudd in 2007.

It was a similar situation in the United States where the Clinton administration had signed Kyoto but without support in the Senate, the protocol had never been legally ratified.

President George W. Bush announced in March 2001 the US would not ratify Kyoto. The following month, then prime minister John Howard wrote directly to Mr Bush to explain Australia’s approach to the issue.

On June 4, the federal cabinet discussed how to further engage with the US and deal with growing emissions.

A cabinet minute from four separate departments, including Foreign Affairs and Prime Minister and Cabinet, shows concern across the bureaucracy about how America’s decision could have a major economic flow-on.

“It is hard to see how a US proposal for a global regime that seriously addresses climate change but which is not based on mandatory targets would allow for a fully functioning international emissions trading scheme,” cabinet was told. “This could force Australia to pursue more expensive domestic policies and measures to achieve any abatement task.”

Another concern was how global negotiations could focus on issues that might bring attention to Australia, which was one of the few nations able to increase its emissions under Kyoto. That included the effective high rate of per person emissions. 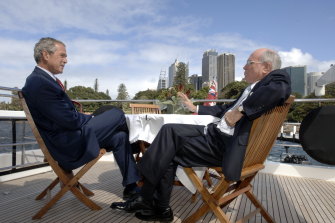 US President George W. Bush in Sydney with John Howard in 2007. in 2001, Mr Howard wrote directly to Mr Bush to explain Australia’s approach to Kyoto.

“Approaches such as atmospheric concentrations, which in the past have drawn attention in international negotiations to per capita emissions, would be contrary to Australian and US interests given our relatively high per capita emission levels. We should ensure that the US is aware of this danger,” cabinet was told.

At that time, it was envisaged a mandatory global cap-and-trade system would be introduced. The US position on Kyoto opened the door to a voluntary system, but cabinet was told that while there might be some local businesses supportive of such a move, it would not work.

“A voluntary international regime is likely to be strongly rejected by the international community and difficult to defend domestically (although some industry might be supportive),” the papers showed.

In a separate cabinet paper from then industry minister Nick Minchin about the development of a national energy strategy, the rift within the government on greenhouse emissions was brought to the fore.

The Industry Department, arguing Australia would rely on fossil fuels for “the foreseeable future”, wanted increased energy efficiency across the nation’s electricity network, more take-up of alternative energy sources while also promoting the development of the natural gas sector.

But comments from the Environment Department, headed by minister Robert Hill, criticised the Industry Department for in effect ignoring Australia’s commitments to reduce greenhouse emissions.

It noted there had been just a “cursory” acknowledgement of environmental issues, while the entire scope of the energy strategy planned by Industry was inconsistent with the federal government’s own commitments made to states and territories in November 2000.

“We note that the independent inquiry into energy market development and prospects overlooks climate change and other environmental issues,” it said.

“Given that energy market reform has (unwittingly) contributed to rapid and significant emissions growth in what is Australia’s single largest emissions source, we request that the terms of reference for this inquiry encompass options for reducing the greenhouse and adverse environmental impacts of the reform process.”