At least 26 executives at government agencies took home six-figure bonuses on top of their regular pay in the last financial year, as investigations into excess spending begin at Australia Post and the corporate watchdog.

An analysis of almost 100 annual reports from 2019-20, covering nearly 200 executives at Australian government organisations, finds many of them were paid bonuses on top of their base pay. In a handful of cases, the bonuses nearly doubled the person's salary. 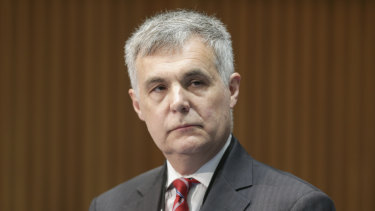 The government is scrutinising corporate excess among taxpayer funded organisations after expenses scandals involving the chair and deputy chair at the Australian Securities and Investments Commission, and Australia Post. It has also asked government agencies to exercise wage restraint and keep community expectations in mind during the coronavirus pandemic and recession.

The top paid government executive was NBN Co's Stephen Rue, who was in line to take home more than $3 million, including a $1.17 million bonus, the broadband network's annual report shows.

The next top paid executive was Paul Broad, who heads Snowy Hydro. He received more than $1.1 million in base salary and a $934,485 bonus, according to the power company's annual report.

Snowy Hydro has a clearly spelled out formula for its executive bonuses, which includes that they are only paid if no staff or contractors have died in the relevant year. All up, its eight-strong executive team won nearly $2.8 million worth of bonuses, an increase of more than half a million dollars from 2019.

Australia Post's Christine Holgate, who resigned as chief executive on Monday after her decision to give four executives Cartier watches worth a total of $19,950, did not take a bonus this year after the board bowed to political pressure and vetoed performance pay for top executives. But she still took home more than $1.4 million in base salary.

The chief investment officers at the Future Fund and Commonwealth Superannuation Corporation nearly doubled their salary after bonuses worth more than $600,000 each were paid.

They benchmark executive salaries to industry standards and include "variable pay components linked to both investment and personal performance. The Future Fund notes its chief executive is allowed to have up to 120 per cent of their base salary in variable pay.

The Clean Energy Finance Corporation, which also has an chief investments officer, notes in its report it balanced the government's request for restraint this year, community expectations, and other factors such as its "significant role in nation building projects which have the potential to provide economic stimulus and job creation".