The actor, writer, producer and director opens up about his latest project, a limited series about the opioid epidemic. 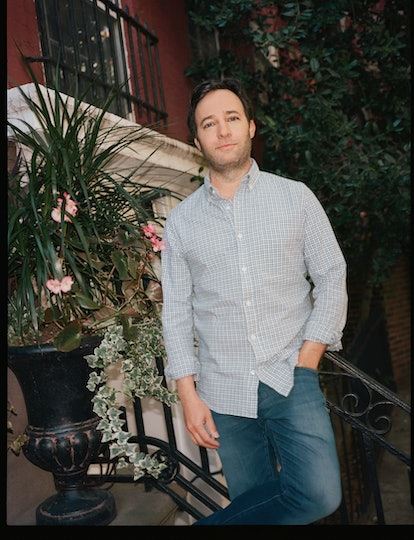 “How do you tell a story about the opioid crisis and not make it depressing?” Danny Strong asked on a sunny September morning, as we sat across from one another in the backyard of a West Village café. It’s a fair question; plumbing the depths of an ongoing American epidemic without leaving your audience feeling completely hopeless is a daunting task. But Strong—an actor, writer, director who is now at the helm of the Hulu limited series Dopesick—is up to the challenge.

Strong was most recently honored for his work co-creating the popular musical drama series Empire, with Lee Daniels; he also appears on Showtime’s crime series Billions. Although the California native is the first to admit that, he can sometimes be “very Hollywood,” his interest in politics—and political dynasties—has been a driving force behind his career.

He got his start as an actor at the University of Southern California, where he acted in political plays while also itching to create his own work. “One time, someone came to lecture us and asked what we wanted to do, so I said, ‘I want to write, direct, produce, and act,’” he remembered, “And everyone laughed at me.” Now, he’s the one laughing.

That said, the beginning of Strong’s career wasn’t as fulfilling as he initially hoped. His first major television gig was playing Jonathan Levinson on Buffy the Vampire Slayer. The character, he remembered, was only supposed to appear for a few episodes and was a bit of a gimmick (Jonathan was like the “Kenny” of Buffy; he was always on the verge of being killed off by supernatural forces and that was the joke) but they decided to keep him around for more. He popped up on some later seasons of Gilmore Girls as Doyle, editor of the Yale Daily News and eventual boyfriend of Paris, Rory Gilmore’s best friend. He spent the late ’90s and early ’00s building a solid portfolio of television credits outside of booking commercials, but he was still itching to write his own films, penning broad comedies that could have been perfect for a Jim Carrey type lead, though none of them were ever picked up.

Then, one day, in a moment of clarity, he realized there was a problem with all of the hours he had spent in his twenties writing those screenplays (the first of which was a dark indie comedy about two kids trying to kill an old man for his rent controlled apartment, another of which was about a nerd and a jock who swap bodies à la Freaky Friday). “I realized I would never go see any of these movies,” he remembered. “If I saw a trailer for any of the movies I was writing, I would turn to whomever I was with and start making fun of it. I was trying to write movies to sell, not movies that I think are great. I thought, the next thing I write has to be something I would go see.”

He didn’t write for months, but the moment he returned to the craft, he wrote a screenplay about the Florida recount during the 2000 United States presidential election, and it sold rather quickly. “I was so angry about politics in 2005. The Iraq War had enraged me because we were flat out lied into it,” he remembered in between bites of his breakfast. “I saw a political play called Stuff Happens by David Hare, which was about the Iraq War. Someone wrote a play about everything I was mad about. I was in the back of the theater, fuming, and I thought, I need to write something like this.”

When he walked out of the theater, he was struck by an idea to write a screenplay about the disastrous Florida recount during the 2000 United States presidential election. The script, Recount, would go on to be produced by HBO and directed by Jay Roach, and won an Emmy in 2008. (He would also team up with Roach again for Game Change, which focused on John McCain’s 2008 presidential campaign, starred Julianne Moore as Sarah Palin, and received five primetime Emmy awards). “The universe pays you,” Strong told me. “You make a decision for the right reasons as opposed to wanting to sell, and the universe pays you back.”

Suddenly an in-demand writer after the success of Recount, Strong moved to New York and quit acting. “Those first two years in New York were some of the happiest moments of my life,” he remembered. No longer hopping from audition to audition, he had the time and energy to write the screenplays for Game Change and Lee Daniels’ The Butler. He penned the scripts for the two-part Hunger Games finale. He also found that he finally had time to enjoy watching television, since he wasn’t trying to star on it. Then, his favorite show came calling to ask him to audition for a part, and he couldn’t turn it down.

“Mad Men is why I started acting again,” Strong admitted. “I’d flat out quit and didn’t know if I was ever going to do it again. I was in conflict, but Mad Men gave me clarity.” He was cast in the fourth season of the award-winning series as a dunce named Danny Siegel (who, after being laid off by the advertising agency eventually goes on to become a big-headed Hollywood producer who demands to be called by his full name, Daniel J. Siegel). Now, he’s a main cast member on the Showtime series Billions, which will air its sixth season early next year, and was the reason Strong was able to meet me for breakfast in New York, rather than Zoom from his house in L.A.

And that brings us back to Dopesick. As the café began to fill up with customers, Strong spoke animatedly about the challenge of creating the series, which he hopes will provide the audience with “a bird’s-eye view of the entire opioid crisis, while also being inside the crisis at the same time.” The idea for the show began to develop about four years ago, shortly after two exposés were published about the epidemic and the culpability of the Sackler Family, owners of OxyContin producer Purdue Pharma: one by Patrick Radden Keefe for the New Yorker, the other by Christopher Glazek for Esquire. Both stories also caught the attention of John Goldwyn, who pitched Strong the idea of working on a project about the Sacklers.

But Strong quickly realized they needed to broaden their scope: “I started diving into it and thought, this story is much bigger than just the Sackler family,” Strong said. “The bigger story is about the institutions that are supposed to protect us from this criminal organization, who not only failed us but helped them, and in certain instances benefitted themselves. There are so many levels to it, and it’s really profound.” Eventually, Strong started working with Beth Macy, the author of the investigative book Dopesick, as they brought the idea to Hulu as a limited series. (“I just love Beth Macy, she’s just a national treasure,” Strong said in between sips of his tea.)

In the series, the Sacklers’ hushed meetings take place in the New York City museums at which the family’s name is etched above entire wings. The pharmaceutical reps (two of which are portrayed in the show by a feisty Philippa Soo and a reserved Will Poulter) attend conferences at which they are wined and dined, teased with massive monetary prizes, and encouraged to prod the doctors into using highly specific language about OxyContin, particularly the phrase “less than one percent become addicted to the drug.” Research conducted by the Center for Disease Control, however, shows that from 2009 to 2019, it is estimated that 500,000 people died from an opioid overdose, and that’s just in the United States.

When I asked Strong if there is a common theme present in all of his work, he pointed to “a sense of social justice in storytelling where some type of wrong is exposed.”

“First and foremost the art has to be good,” he said. “I think the discussion of societal wrongs and institutional issues, when done correctly in art, makes the art better. I’m trying to find different cultures that aren’t getting mainstream shots at entertainment and seeing if I can get those shows made by getting writers that are of that culture to write them, so their stories can be told. That’s my version of sending the elevator back down, and it’s not charity, it’s a business. I think there could be something really dynamic and explosive in there.”

Towards the end of our conversation, Strong seemed to land on an answer to his initial question of whether or not a show like Dopesick could be something other than depressing. “The show is the trial that Purdue Pharma and the Sackler family never had. The goal is to lay out the crime of that company and the lies of that family,” he said. Strong also said he wants viewers to feel enraged by what they see in Dopesick’s eight episodes. Perhaps it could even be life changing for some individuals who have been negatively affected by the prevalence of OxyContin, or even addicted to it themselves: “The show also goes into therapies that can be effective for people with opioid abuse disorder,” Strong went on. “I think it could save lives if people see certain therapies that are very stigmatized but are incredibly effective.”