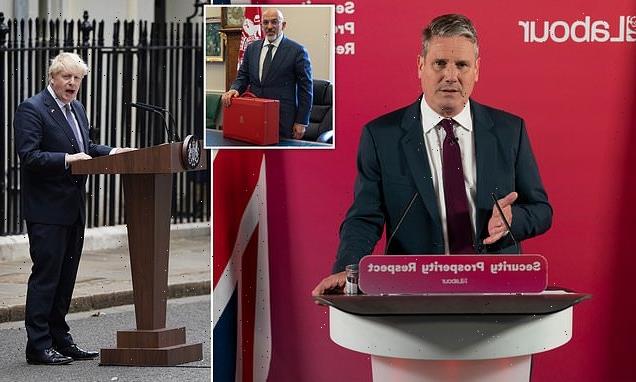 DAN HODGES: Boris is history and now Sir Keir Starmer has a new problem – his guns are pointing at an empty no-man’s land

Just as Boris Johnson was fighting a desperate and doomed rearguard action to save his premiership, in the middle of last week two political operatives were spotted walking out of a Central London pub.

One was a senior Labour official. The other an ally of a high-profile Tory leadership hopeful.

A few hours later the phones of several Westminster journalists began to ring. The caller suggested they should start looking into the financial affairs of another possible leadership candidate, new Chancellor Nadhim Zahawi.

According to one Labour Shadow Minister: ‘We’ve had the various rival camps sending us all sorts of kompromat on fellow candidates. Openly, they’ve been saying we should ‘add it to our files’ on their rivals. They want Labour to get it out there in the public domain without any of their fingerprints.’ 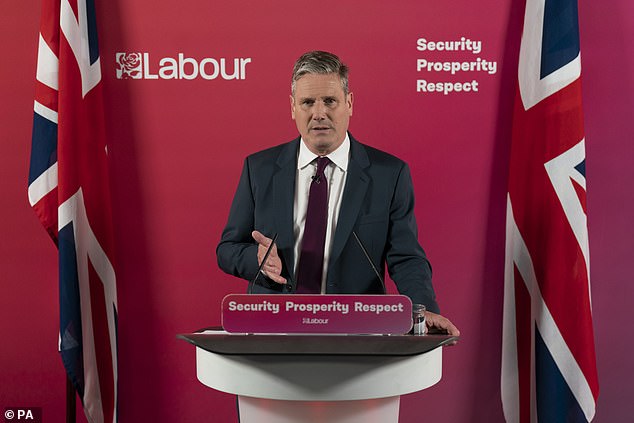 Starmer has another problem. He is no longer the future. The mantle of change can now be seized by a new Tory leader. It’s they, not Sir Keir, who have been handed a clean slate. It’s the Conservatives – not Labour – who have the opportunity to introduce themselves afresh to the voters

The Tory leadership campaign is only 72 hours old, but it’s already the dirtiest and most vicious in modern British political history. Stories about the sexual indiscretions of one leading female candidate. Rumours involving the work in the intelligence services of another. Tax dodges. Shady loans. Shadowy offshore accounts.

One Tory grandee told me: ‘Everyone’s going a bit hysterical. They haven’t had enough sleep. They’re all trying to carve out their own positions – and they’re all charging around like maniacs.’

How true. And they need to stop. This weekend, everyone in the Tory Party needs to calm down, take a deep breath, and take a step back.

No wonder the popular perception in Westminster is that this has been a disastrous seven days for the Government. A charismatic leader has been defenestrated. Poll ratings are in freefall. The Red Wall is in revolt.

All of those things may be happening. But it doesn’t change one simple fact. The events of the past seven days could ultimately prove to be good for the Conservative Party, and the country.

Whatever his strengths, Boris Johnson had lost his way. He couldn’t find a strategy for moving on from Partygate. He had no clear vision for tackling the cost-of-living crisis.

And in truth, since securing his triumphant 80-seat majority, he was never able to provide a coherent answer to the question: ‘OK, Boris, what do you want to do with it?’ 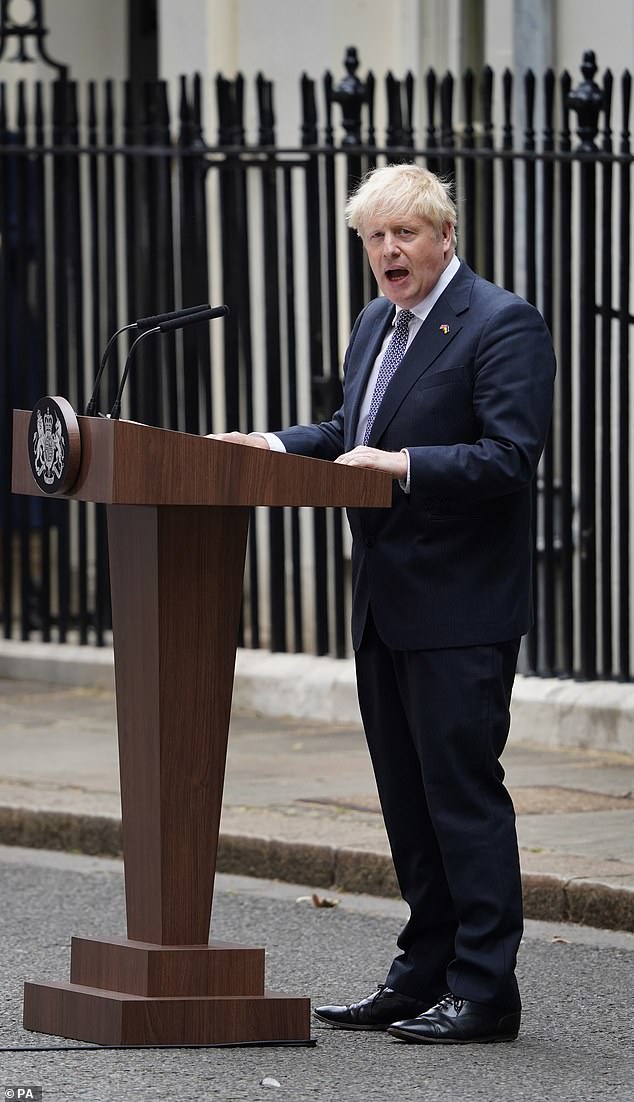 Whatever his strengths, Boris Johnson had lost his way. He couldn’t find a strategy for moving on from Partygate. He had no clear vision for tackling the cost-of-living crisis

When I was in Devon for the recent Tiverton by-election, I didn’t discover visceral public antipathy towards him. But the old magic had gone. Boris was no longer Conservatism’s iconic buccaneer, but the albatross around its neck.

And now that battered old seabird has been successfully – if brutally – removed. Unlike the albatross that is currently clinging like grim death to the Labour Party.

Sir Keir Starmer spent the end of last week cockily celebrating his Beergate acquittal. But many of his MPs were not. ‘We’re stuck with him now,’ one backbencher ruefully told me when Durham Constabulary’s statement dropped.

They are, and that gives the Conservative Party an opening. Starmer’s political gameplan was exclusively calibrated towards defining himself against Johnson. But now he finds his guns pointing at an empty no-man’s-land.

The reality is that Johnson was ousted despite, not because of, Starmer’s performance. In recent months, Labour’s poll lead has been averaging around five or six percentage points. Which is staggeringly poor given the state of Johnson’s personal fortunes.

Starmer has another problem. He is no longer the future. The mantle of change can now be seized by a new Tory leader.

It’s they, not Sir Keir, who have been handed a clean slate. It’s the Conservatives – not Labour – who have the opportunity to introduce themselves afresh to the voters. And, the fratricidal backstabbing notwithstanding, there are signs they could seize it.

Significantly, what already stands out in the leadership race is not just the size but the diversity of the field. Rishi Sunak. Nadhim Zahawi. Suella Braverman. Penny Mordaunt. Kemi Badenoch. Liz Truss. Sajid Javid.

Labour talks a good game. But it is stark how the Tory Party is outflanking them when it comes to the promotion of talented Asian, black and female MPs. 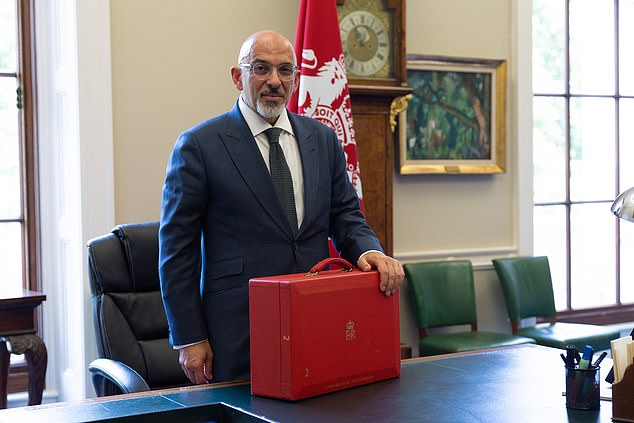 Significantly, what already stands out in the leadership race is not just the size but the diversity of the field. Rishi Sunak. Nadhim Zahawi. Suella Braverman. Penny Mordaunt. Kemi Badenoch. Liz Truss. Sajid Javid

But diverse branding will not be enough. The challenges facing the Government may not be insurmountable, but they are significant. And to overcome them, whichever candidate prevails will need to grasp the following truths.

First, they must realise that, as ever, ‘it’s the economy, stupid’. This is the issue that will determine the Conservative Party’s fate. Inflation has to be brought under control. Spending must be reduced. Taxes have to be cut.

These are the foundation stones upon which the post-Johnson era will be built. Levelling up is important. Securing the opportunities presented by Brexit is necessary. But hard-headed, fiscal prudence – after the mega-state Monopoly-style spending of the Covid years – is non-negotiable.

Second, sacrificing seats in the Blue Wall to safeguard seats in the Red Wall is politically unsustainable. Boris did a brilliant job in securing 20 or 30 seats in former Labour heartlands. But as Tiverton and North Shropshire proved, traditional Tory voters are tired of being taken for granted.

As one leadership candidate told me: ‘The problem is we haven’t been sufficiently Conservative. We’ve been running a New Labour strategy – build a bridge here or a road there. We’ve forgotten the key Thatcherite messages of opportunity and wealth creation.’ And the final thing Tory MPs need to grasp is this. You cannot run a Boris Johnson-style political strategy without Boris Johnson. There is no one in the Tory ranks – or, indeed, the ranks of any other party – who can match his charismatic or populist touch. Any search for ‘the new Boris’ will prove fruitless.

Yes, the Tory Party must be careful not to throw the baby out with the bathwater.

The defiant axis constructed between London and Kyiv must be maintained. There can be no surrendering in the war against the progressive culture warriors. The fight against Channel people-smugglers must be won.

BUT the next Prime Minister has to be their own woman. Or man. The one thing the British people abhor in politicians is inauthenticity. They already get quite enough of that as St Keir roams the airwaves, taking an axe to another pledge he peddled while tricking the Corbynites into handing him control of their party.

So there is no point in the Tories slapping a blond wig on Rishi Sunak, an ill-fitting suit on Tom Tugenhadt or a woolly hat and oversize jogging shorts on Liz Truss. Whoever gets the keys to No 10 must lead on their own terms, and with their own mandate.

The assassination of Boris was brutal. A number of Tory members and supporters are still bruised and bewildered at his demise.

But what’s done is done. We remain in the midst of a European war. A cost of living crisis. An ongoing struggle with Brussels over the shape of Brexit.

Tory MPs need to grow up. And they need to cheer up. It’s been a savage week. But if they keep their heads, they’ll realise why it could still prove to be a good week for their party, and their country.