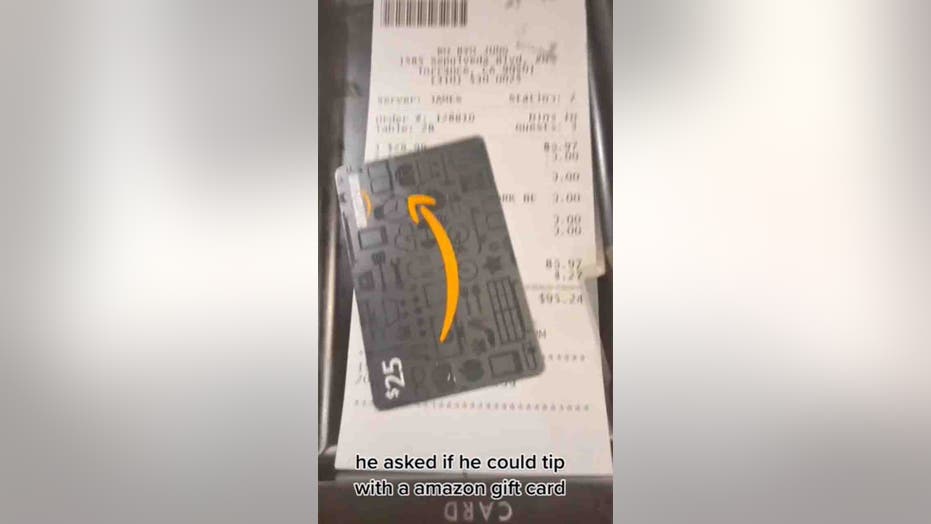 A teenager is going viral on TikTok after he asked his waiter if he could give him an Amazon gift card as a tip.

Kaitlyn Lombera, 21, from California, who goes by the username @kaittwest on TikTok, posted a video on the social media platform earlier this week showing her 17-year-old brother at a restaurant.

In the clip, Lombera wrote: “He asked if he could tip with a Amazon gift card [sic].” 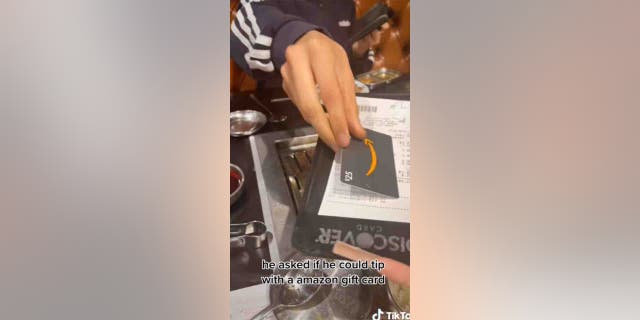 Kaitlyn Lombera posted a video on TikTok earlier this week saying that her younger brother asked their waiter if he would accept a $25 Amazon gift card as a tip.
(Courtesy of Kaitlyn Lombera)

Lombera then shows the receipt, which totaled $95.24, before her brother places the $25 Amazon gift card on top of the receipt.

Lombera told Fox News in a message that she took the video while she was out at dinner with her brother Gustavo and their older sister Ashley. She explained that Gustavo didn’t bring the gift card intending to use it, but when it came time to pay, Ashley decided to cover the bill.

“My brother wanted to contribute somehow, so he offered to tip with the Amazon gift card,” Lombera said. “Our waiter was super nice, we loved him…so my brother thought a $25 gift would be a good tip.”

But when Gustavo asked the waiter if he would take the $25 gift card tip, Lombera said the waiter laughed, so Ashley ended up tipping on her card instead. 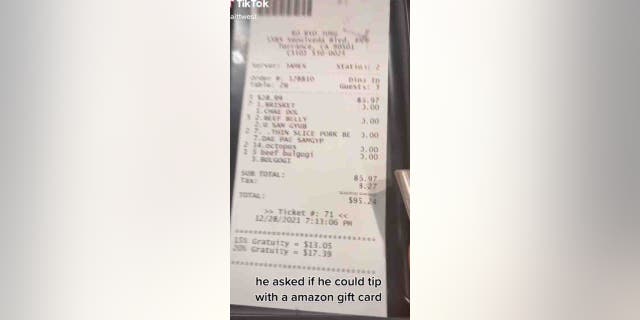 Lombera told Fox News that the waiter laughed, so her older sister decided to give him a tip on her card, rather than with the Amazon card.
(Courtesy of Kaitlyn Lombera)

Since Lombera posted the video earlier this week, it’s been viewed more than 500,000 times. The clip also led to a debate in the comments about whether an Amazon gift card is an appropriate tip for a restaurant server.

Someone else wrote: “I know your sweet brother meant well, but they don’t know how much money is actually left on the card & need cash to pay bills.”

Other people also pointed out that the server would have no idea how much money is on the card. Lombera confirmed to Fox News that her brother’s gift card had the full $25 on it – even though he didn’t end up leaving the card as a tip.

However, many other people – including people who said they work in the restaurant industry – said they would have loved to receive an Amazon gift card as a tip. Other people also pointed out that $25 is more than a 20% tip on the $95 meal. 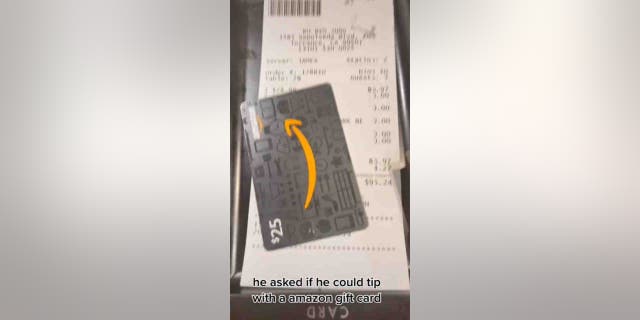 The clip inspired a debate in the comments about whether an Amazon gift card is a good tip for a restaurant server, with some arguing that it’s a bad tip, while others saying they would have liked a gift card tip.
(Courtesy of Kaitlyn Lombera)

Someone else wrote, in part: “I don’t see what’s wrong? He wanted to tip and he was finding a way to do so.”

“Wouldn’t be a bad tip in my opinion,” another person wrote.

Other people even commented that they had done this themselves, or had received gift cards themselves and enjoyed it.

“Once a lady had no cash and tipped me with a $10 Starbucks card,” someone wrote. “I loved it!”

Despite some of the harsh reactions on TikTok, Lombera said the interaction with the server was actually “a lighthearted situation” overall.