PRESSURE cookers have come into vogue in recent years as creative chefs are looking at ways of reducing cooking times.

We get hands-on with the Crock-Pot CSC051 to see if the trend is worth the hype. 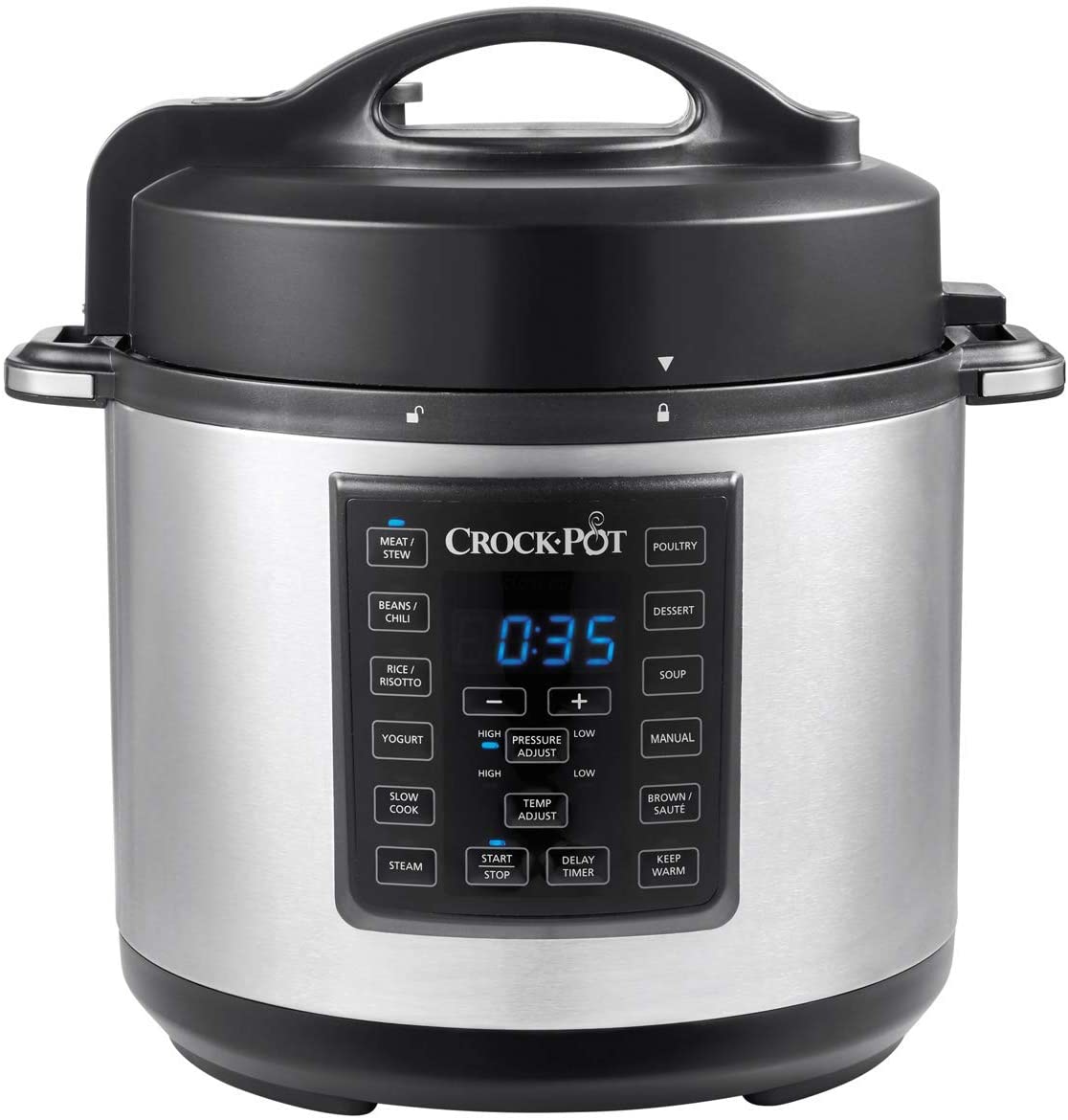 Pressure cookers have come a long way since the rattling devices of yesteryear which seemed like they were ready to take off when they got up to temperature.

Nowadays, for well under £100 you can pick up a pressure cooker which not only does a great job of cooking your food, but also sits silently in the corner for the duration of your cook.

Not only that, some models (including the Crock-Pot CSC051 we tested) also double as a slow cooker, if you want to prepare your meals in the morning and have them ready to eat when you return from work.

After a few months of testing, we give you the down low on the Crock-Pot CSC051.

The extra size made us more determined to use the cooker to justify the counter space it took up, which was easier than expected, as we found most meals could have at least one component cooked in the Crock-Pot.

That’s because it’s not only got numerous settings for pressure cooking, but slow cooking and sauteing as well. As a result, it wasn’t a struggle to find a use for the Crock-Pot most days, especially since we were cooking more often thanks to the lockdown.

How easy is the Crock-Pot CSC051 to use?

The Crock-Pot CSC051 is pretty intuitive: simply select the meal you’re looking to cook and the Crock-Pot will present you with a recommended cooking time that you can tweak if you’re cooking smaller or larger portions.

Settings include rice, stew, poultry, soup, steam and slow cook, so it’s not difficult to get to grips with out of the box. 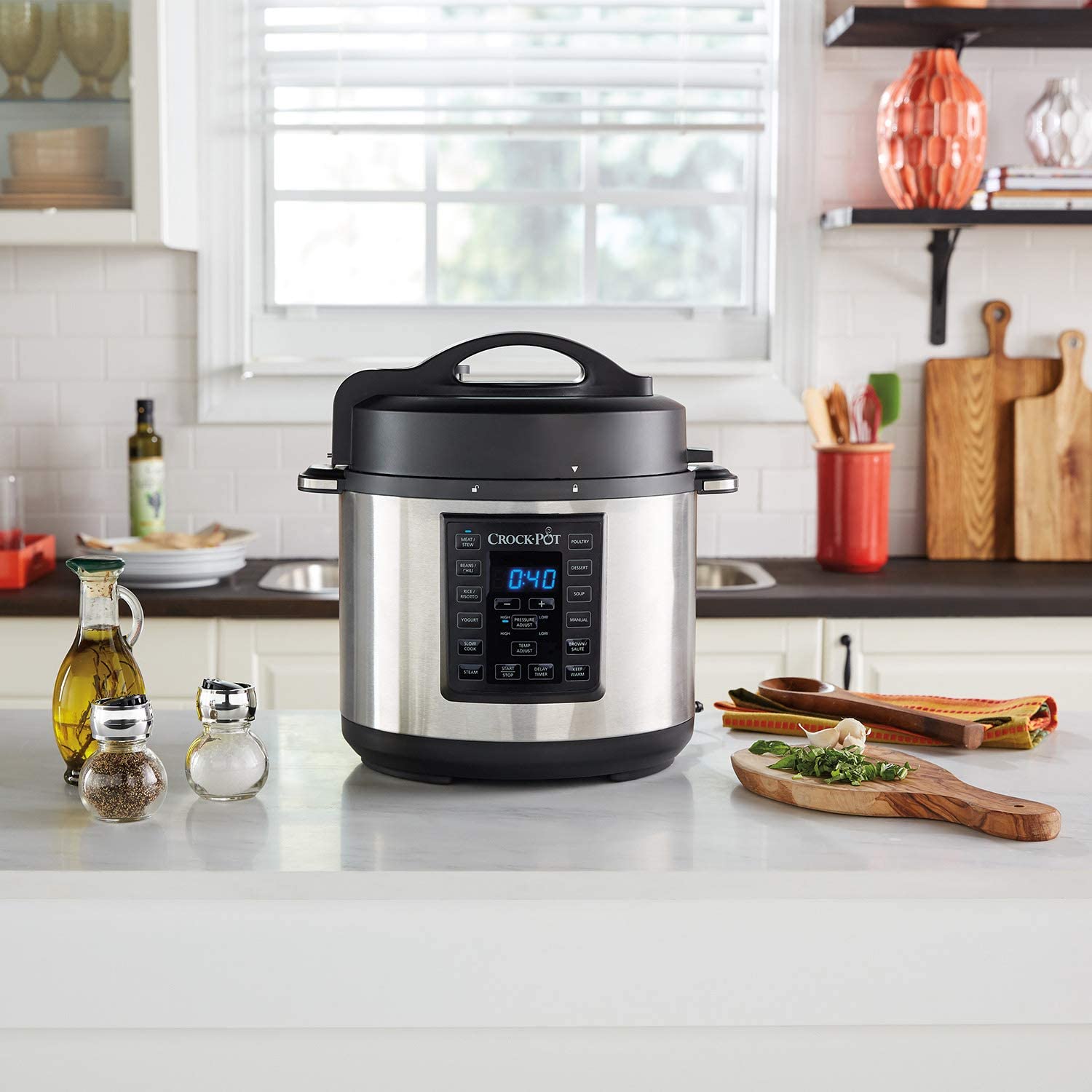 How does the Crock-Pot CSC051 perform?

In our testing, we got the ball rolling by making a variety of slow cooker/pressure cooker staples: chilli, curry, stew and rice.

All were an absolute doddle to make as we simply browned what needed to be browned on the saute setting, before chucking in the remaining ingredients, selecting the correct programme and leaving the cooker to do it’s work.

After we closed the lid it required nothing else from us until the cooking was done. And, because pressure cooking allows the steam to reach higher temperatures, the cooking is done faster than you might expect; you can even get a whole chicken done in under an hour.

As an added bonus, because the container is sealed, there’s little risk of your meal drying out, so never again will you have to break out the wire wool to clean a neglected chilli off your pan.

In terms of performance, we couldn’t have asked for more from the Crock-Pot CSC051. We felt confident using it by day two and it’s never disappointed in the results.

We’ve even taken to cooking our Sunday roast chickens in the pot (before crisping them up in the oven) as the meat comes out much more tender than we’ve managed from a standard oven cook.

Another perk: if you sling in some water and veg with your whole chicken, you get an amazing stock left over that will give your next meal a boost.

How much does the Crock-Pot CSC051 cost?

The Crock-Pot CSC051 is priced at £74.99 which is about mid-range in the automated pressure cooker market.

You can buy a manual pressure cooker for much less, but for our money, pressure cookers (and slow cookers) should be about making your life easier and saving you time, which the Crock-Pot does with aplomb.

If £74.99 seems like a stretch, it could be worth waiting for Black Friday to roll around, as there’s usually a good number of pressure cookers on sale at that time of year from the big retailers, including John Lewis, Amazon and Argos.

We quickly grew to love the Crock-Pot CSC051 in testing.

We thought that, given its size, it would be a fun experiment, for which our enthusiasm would eventually fizzle out, but in reality, we’ve got no plans to remove the cooker from our kitchen counter any time soon.

It’s a massive time saver as it takes so much of the faff out of cooking and helps you reduce your washing up time if you combine everything into one bowl.

On hotter days, it became our go to cooking method, as it didn’t contribute any additional heat to our stuffy kitchen, and it meant that all cooking odours were confined to the sealed pan.

If you’ve got the kitchen space (or you can make some) we can’t see any drawbacks to buying this pressure cooker.

We've picked out the best washing machines you can buy right now.

If you're in the market for a bargain, we've rounded up the best cheap microwaves.

And for another alternative cooker, check out the best air fryers.