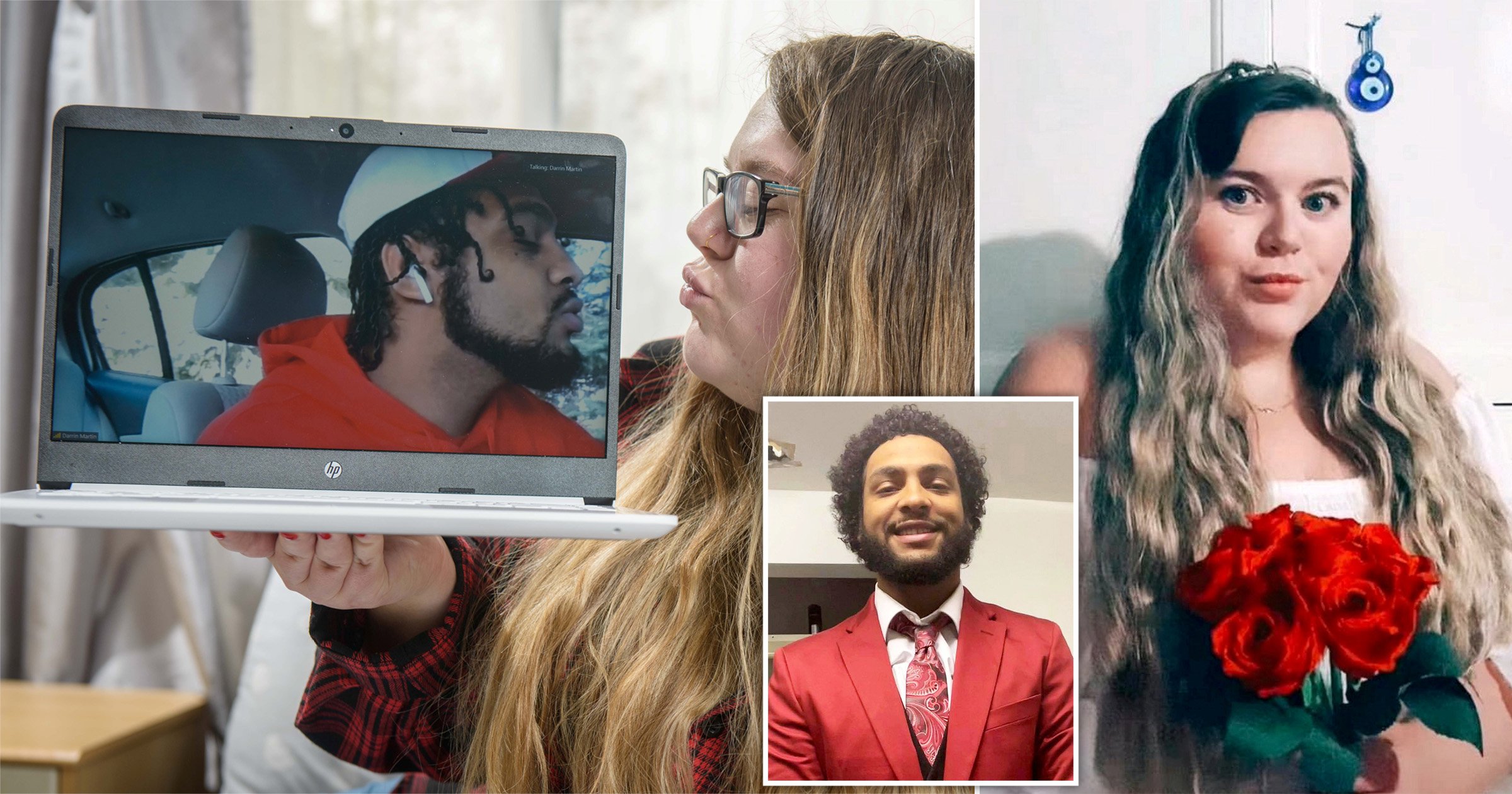 Relying on Zoom connectivity during an important meeting can be stressful enough – let alone for a wedding.

But for one newly married couple, they used Zoom for this exact purpose after starting a transatlantic relationship during the pandemic.

They pair have still never met in real life.

Ayse, 26, and Darrin, 24, met online during the pandemic thanks to a Facebook group aimed at pairing up pen pals from around the world.

She said he was a similar age and would love to chat to someone from the UK – he was based in Detroit, Michigan, US.

So the two began chatting as friends in July 2020, but were soon inseparable and on the phone to each other every night.

The five-hour time difference didn’t stop them and they quickly became official.

Ayse began planning a trip to the States to meet her boyfriend for the first time in July – but travel restrictions to the US made this impossible.

The couple continued their weekly date nights via video calls and would do sweet things like order each other takeaway food and treats as a surprise.

On May 21, 2021 Darrin proposed to Ayse, wanting to commit fully to the relationship.

With restrictions preventing them from meeting for a long time, the couple decided to get married via Zoom, in a legal ceremony officiated in Utah, US.

On August 19 this year, Ayse and Darrin became husband and wife, with a small number of friends and family there to see it through video call.

Even now they are yet to meet face-to-face, instead speaking multiple times a day while waiting for Ayse’s visa application to be accepted.

Ayse, a cleaner, from Lancaster, said: ‘I never imagined this would happen to me in a million years.

‘I don’t think anyone expected this when we started talking last year.

‘But we’re married and it’s all completely legal and official – I still can’t believe it.

‘It’s been really hard not being able to meet properly, but in the long run it will make us stronger because we’ve had to go through all of this to be together.

‘We just really love each other.’

Ayse was only looking for a pen pal to cure her boredom in lockdown – though she found love.

‘It’s funny that I met my mother-in-law before I met my husband,’ Ayse said.

‘We got on so well, so when she suggested speaking to her son, I thought it was a great idea – although I was a bit nervous at first because I’d seen photos of him and he looked lovely.’

‘I knew he was from the US so didn’t expect anything from it but thought it would still be interesting to chat to someone from somewhere else.’

Then they started having phone calls and found they had lots in common.

‘I worried it might be awkward, but we talked for hours,’ Ayse said.

‘We have so much in common, including both being terrified of thunder and lightning, and both having owl tattoos with blue eyes.

‘I’m not a flirty person, but it came so naturally when I was chatting to Darrin – we got on so well straight away.’

Every night they would fall asleep while on the phone to each other so they felt closer together.

Due to the five-hour time difference, it meant Ayse was falling asleep 2am – a sacrifice she says was ‘completely worth it’.

‘It was during the pandemic so I wasn’t working as I’d been furloughed and just altered my sleep pattern, so I was sleeping at the same time Darrin was,’ she said.

‘We’d be on video call and just be chatting when we fall asleep – then usually when I wake up, he’s still there sleeping.

‘It’s the closest we can get and might sound strange but it’s a huge comfort.’

The pair did try to get around travel restrictions with Ayse flying to Mexico for 15 days before approaching the US, but she was sent home by immigration.

‘I think they thought that if they let me into the US then I’d never leave because of Darrin,’ Ayse said.

‘His address was listed as where I was staying on my tourist visa and they asked my relationship to him, so when I told them he was my boyfriend and they saw I’d been in Mexico for 15 days I guess they thought I’d try to outstay my visa.

‘I would never have done that, and it was so heart-breaking to be so close to him in the same city, but not be allowed through the border.

‘I was put on the next flight home and cried the whole way back.’

Just days after she returned to her home in Lancaster, Darrin suggested a ‘special date night’ where they both got dressed up to spend some virtual time together.

‘When he answered the call he seemed so nervous which was unlike him – but I soon understood why when he got down on one knee and asked me to marry him,’ Ayse said.

‘I couldn’t believe it. He said he’d been planning to propose when I came to Detroit but couldn’t wait any longer to ask.

‘Despite never meeting, there was no doubt in my mind that I wanted to marry Darrin.’

The couple’s engagement was fully supported by both of their families.

‘I didn’t tell my parents straight away when we first started talking, but they twigged there was something going on when I was on the phone all the time,” Ayse said.

‘They had reservations about it to start with – but I suggested they chat to Darrin on Skype and they saw straight away how crazy we both are about each other.

‘When Darrin proposed he spoke to my dad beforehand to ask his permission, which I thought was really sweet and know my dad really appreciated.

‘In our heads, as long as our family and friends are supportive, that’s all we need.’

The couple initially planned to tie the knot when they finally got the chance to meet for the first time, but after reading about a new law passed that made international virtual wedding ceremonies legal in the state of Utah, they decided not to wait.

‘We’ll make sure we celebrate together when we can – but for now, this was perfect,’ Ayse says.

‘I miss Darrin every day but I know we’ll be together one day and it’ll all be worth it.’

Despite travel restrictions being lifted to the US from the UK this week, Ayse has to wait for another visa to be accepted before she can book her flights.

‘We don’t know when I’ll be able to get over there but are trying to be as positive as we can while we wait,’ Ayse said.