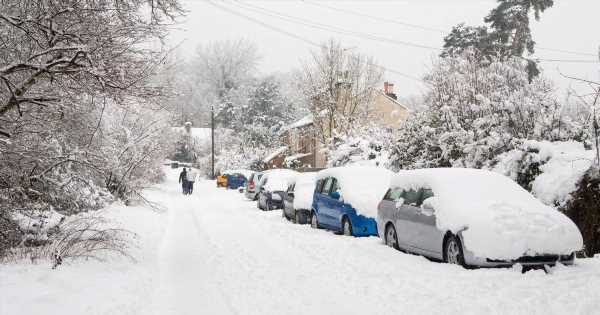 After a warm and wet Christmas, the weather is about to deliver a blast of snow and freezing low temperatures.

While it’s too late to call it a white Christmas, it certainly looks set to be a snowy start to the year looking at the January forecast.

Following what was the warmest New Year's Day on record, temperatures are finally set to plummet across the country.

The Met Office has already said that it is ‘considerably colder’ this week and has tipped the mercury will fall even further.

BBC weather forecaster Ben Rich said up to 15cm of snow could fall on higher ground in Scotland on Tuesday.

The meteorologist said: “Snow and gales for some of us particularly in the north of the UK. The cold air filtering in on the back of this band of cloud and rain and with some sleet and snow on the back edge.

"Ice a possible hazard across the northern half of the UK where it will be a really chilly first part of the morning." "Wintry showers starting to pile up in northern Scotland, in fact snow showers even to quite low levels, over the highest hills 15cm of accumulating snow and the gales, severe gales around northern coasts, there could be blizzard conditions for a time."

Elsewhere, in Lincolnshire or the Pennines, any snow is likely to be "slushy stuff" over the next few days.

However, the high winds are expected to make the cold weather feel even more bitter. Met Office forecaster Simon Partridge said that wind combined with the cold is likely to create ‘blizzardlike conditions’ in some parts of the country.

"It will definitely be colder, so if you're going out, think about an extra layer tomorrow [Tuesday] … you might need anything to keep the wind out because it's not going to be pretty," he added.

Aviemore, in Scotland, saw five centimetres of snow on Monday, which would be added to overnight. The temperature in northern Scotland could fall to -7C on Wednesday night and towns in the South could face temperatures of -4C on Thursday morning.

Mr Partridge said: "It's basically what we should have for this time in January; it's just that we've been so mild for so long that it's suddenly a bit of a shock to the system."