A major climate policy decision looms for the Morrison government following the election of Joe Biden as the next US President, promising a pro-climate agenda – commit to greater emissions reductions and abandon use of controversial Kyoto 'carryover credits' or risk damage to Australia's reputation.

Australia has committed under the international Paris climate agreement to reduce its greenhouse gas emissions by at least 26 per cent, based on 2005 levels, by 2030. 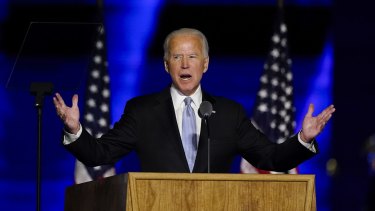 President elect Joe Biden has pledged the US will eliminate carbon emissions from the electricity sector by 2035 and achieve net zero emissions by 2050.Credit:AP

On the current trajectory it will have to draw on 411 megatonnes of 'carryover credits' which were accrued in 2008 by overachieving on the emissions reduction targets under the Kyoto protocol. Australia is the only country that has said it intends to use carryover credits for its Paris target.

Mr Biden is poised to make climate commitments that will outstrip Australia's, pledging the US will eliminate carbon emissions from the electricity sector by 2035 and achieve net zero emissions by 2050.

Mr Biden's presidency means Australia's five largest export markets, covering 70 per cent of trade, will have net zero targets for 2050 or 2060 including the US, China, Japan, South Korea and the UK.

"It's not inevitable Australia will abandon carryover credits, but other countries will be looking for credible emissions reductions and frankly using carryover credits would come at lasting cost to our reputation," Mr Connor said.

The Morrison government has not set emissions reduction deadlines, focusing instead on reducing the cost of low emissions technologies to increase their usage.

Energy and Emissions reduction Minister Angus Taylor said Australia would "only rely on past overachievement to meet future targets to the extent necessary".

"We beat our Kyoto-era targets by up to 430 million tonnes and we'll meet and beat our 2030 Paris target."

Countries will present their plans to meet their Paris Agreement commitment in November 2021 when the UK hosts the next round of United Nations climate talks in Glasgow.

Australia's former top climate diplomat, Howard Bamsey, said the UK and other allies would expect Australia to present a "credible" plan to increase its climate action.

"On current settings with no policy change I'd say many other governments would think if it's not illegal to use carryover, they regard it as unreasonable because it's hiding in the thickets of the Paris agreement and dodging the issue in a way that encourages exploitation of loopholes," he said. "It would have a serious impact on Australia's credibility."

However, Australia's former ambassador for the environment Patrick Suckling, currently a senior partner at climate investment advisory Pollination Group, said while he expected the Biden administration to exert pressure on Australia "it won't be confrontational".

He also said the Coalition's shift to be more active on climate policy and the evolution of carbon abatement and renewable energy technologies "provides the government room to move to not use carryover credits".

Steven Hamilton, a senior economist at the Blueprint Institute, which includes former Liberal MPs Christopher Pyne and Robert Hill, said Australia would need to "massively" increase its current rate of reductions to meet its 2030 Paris target.

"If you wanted to meet the target without carryover credits you'd have to bring forward the closure of something like six coal plants."

"The Morrison government should commit to net zero by 2050 and a clean energy mix that makes it possible before the (Glasgow talks). This would not only avoid being left out in the cold diplomatically, but negate the very real threat of carbon tariffs."