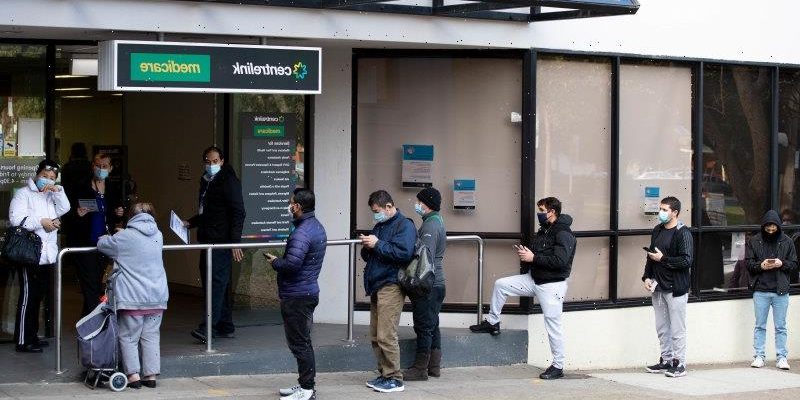 The nation’s unemployment rate has worsened for the first time in almost a year, with experts warning the jobless queue will not fully recover for months as pandemic lockdowns slowly ease and businesses re-open.

Almost 140,000 fewer people were employed in September than the month before, the latest Australian Bureau of Statistics data shows, pushing the jobless rate to 4.6 per cent amid lockdowns across the country. This was a 0.1 percentage point increase in the unemployment rate and the first rise since October 2020. 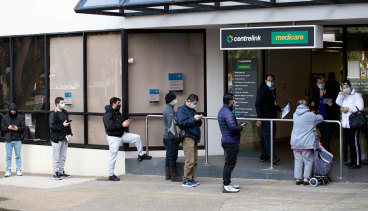 Queues outside Centrelink expanded as lockdowns kicked in earlier this year to stop the spread of the COVID-19 Delta strain.Credit:Janie Barrett

BIS Oxford Economics chief economist Sarah Hunter suspected the labour market would not fully recover from the latest lockdowns to stop the spread of COVID-19 until well into 2022.

“Looking ahead, the labour data will continue to reflect the impact of lockdowns in the near term,” Dr Hunter said.

The participation rate fell 0.7 percentage points to 64.5 per cent as people out of work stopped looking for new jobs during lockdowns.

But Commonwealth Bank head of Australian economics Gareth Aird said job vacancies had held up well during lockdowns, which could assist the recovery.

“Our expectation at this stage is that employment will post a small negative in the October labour force survey, followed by a bounce of about 150,000 [workers] in the November report. Another strong outcome is anticipated in December as Victoria re-opens,” Mr Aird said.

In September, there was an employment contraction of 123,000 jobs and a 25,000 decline in NSW. But Mr Aird said the rest of the nation was a “mixed bag” with states not facing restrictions posting strong jobs growth.

Since the lockdown started in NSW, the number of people in work nationally has fallen by 281,200, down to where it was in December last year. NSW has accounted for the bulk of that fall, down by 234,500 to sit where it was in July last year.

In WA, the jobs market has finally recovered to where it was in 2012 during the mining construction boom. There were 960,200 full-time jobs in WA in September, the highest number since mid-2012. The state’s jobless rate fell to 4.1 per cent, its lowest rate since 2013.

ABS head of labour statistics Bjorn Jarvis said seasonally adjusted employment fell by 138,000 people between August and September and there were 111,000 fewer people employed than in March 2020 before the pandemic.

Over the last three months, participation has fallen by 330,000 people and employment is down 281,000 workers.

“Extended lockdowns in NSW, Victoria and the Australian Capital Territory have seen employment and hours worked both drop back below their pre-pandemic levels,” Mr Jarvis said.

“The low national unemployment rate continues to reflect reduced participation during the recent lockdowns, rather than strong labour market conditions.”

The employment outcomes and economic performance in states that continue to lock down as vaccination rates climb will continue to be a pressure point between state leaders and the federal government.

Treasurer Josh Frydenberg said the job loss data “is a telling reminder of why we must stick to our plan agreed at National Cabinet, to reopen our economy safely”.

“Our sense is that the labour market will have a strong recovery, but it is, of course, [reliant] upon those restrictions being eased.”