Prime Minister Anthony Albanese has directed the Health Department to prepare a briefing on COVID-19 as one of his first agenda items upon returning from meetings in Japan, as health experts push for wider access to fourth vaccine doses.

Albanese, who last week told the National Press Club that Labor would “step up the national strategy” after more than 5600 coronavirus deaths this year, will meet with Chief Medical Officer Paul Kelly and department officials to discuss the pandemic. 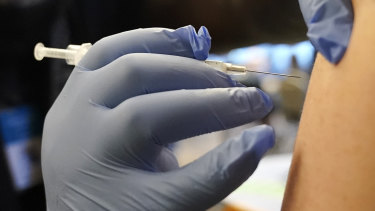 Some experts say access to fourth doses of COVID-19 vaccines should be expanded.Credit:AP

Professor Greg Dore from the University of NSW’s Kirby Institute said Albanese should consider expanding access to fourth doses of COVID-19 vaccines, currently approved only for severely immunocompromised people, those aged 65 and over and First Nations people aged 50 and over.

Former Health Department secretary Stephen Duckett agreed and said Albanese could secure an expanded fourth dose recommendation from the Australian Technical Advisory Group on Immunisation if he made it clear his government would back the change.

“Albanese should be saying to ATAGI: ‘What is the best scientific advice about reducing the impact on the hospital system’?” the health economist said.

The United States recently made fourth doses available to everyone aged 50 and over.

ATAGI will meet on Wednesday to discuss whether to extend eligibility to all immunocompromised people, a change that would allow about 200,000 more people to get a fourth jab.

Professor Raina MacIntyre, also from the Kirby Institute, agreed that fourth dose access should be widened and said Australia must find a way to live with the virus while minimising illness and death, which were at “unprecedented” levels.

While 96 per cent of Australians aged 16 and over are double-dosed, 6.5 million people – almost a third – have not had a booster, including more than 11,470 aged care residents and 191,000 First Nations people.

An effective public awareness campaign could drive the nation’s booster rate to 90 per cent, MacIntyre said.

Dore said a “much more detailed analysis” of COVID-19 deaths was needed to “get a greater understanding of why people are still dying”.

He said it was unclear how many of the people most vulnerable to COVID-19 – such as aged care residents – were being given access to antiviral drugs Paxlovid and Lagevrio, which studies show can reduce the chance of hospitalisation or death by up to 80 per cent.

MacIntyre said access to antivirals, currently recommended only for people aged 65 and older with health conditions, should be expanded.

While the public was no longer willing to tolerate mask mandates, he said, information campaigns could encourage voluntary mask wearing – particularly in high-risk settings – and convince people to come forward for a vaccine or booster.

Duckett said former prime minister Scott Morrison had used “living with COVID” as a political wedge where the options were “lockdown or nothing” but hoped Albanese would be more pragmatic.

Albanese, who will return to Australia on Wednesday after meeting with fellow Quad leaders – US President Joe Biden, Indian Prime Minister Narendra Modi and Japanese Prime Minister Fumio Kishida – in Tokyo, said last week his government would “look at not just the number of deaths, but also the number of people who are in hospital and the number of infections”.

“We need to continue to be vigilant and recognise that this pandemic is still having a real human impact,” he said.