If you judged it by the way Labor's been so quick to match the Coalition’s backdated doubling to $1000-a-year of its tax cut for middle income-earners (good idea) and now the Coalition’s plan to help first-home buyers (con job), you’d be justified in thinking that, despite all their furious arguing with each other, there’s little to choose from between the two sides. For once, however, such a conclusion would be dead wrong.

Not for many moons have voters faced such a clear-cut choice between Labor and Liberal. 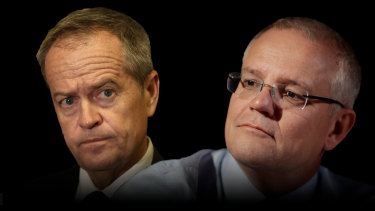 Bill Shorten and Scott Morrison are now in the final week of their battle for the nation’s leadership.Credit:Dominic Lorrimer/Alex Ellinghausen

It’s true that, if you judge the pollies by the way they behave, they’re just as bad as each other. Both sides refuse to answer the question, never say yes or no when they could dissemble, keep saying tricky things calculated to mislead, claim to “feel your pain” when they don’t, keep badmouthing each other and answering a question about their policies by attacking their opponents’ policies, and make promises they’re not sure they can keep.

And – one we’ll need to watch out for if Labor wins – claim to be much more high-principled than the government while they’re in opposition, but then do just the same when they’re in government, justifying it by saying they’re no worse than the last lot.

All true. But where the two sides are very different is in the policies they’re offering. And, although the more unpopular of those policies may or may not make it through the Senate, this is one time I’m inclined to agree with Paul Keating when he repeats his saying that “when you change the government, you change the country”.

Since it’s true that governments lose elections far more often than oppositions win them, the standard practice is for oppositions to make themselves a “small target” – to promise little of substance – so all the focus is on the many things the government has stuffed up. 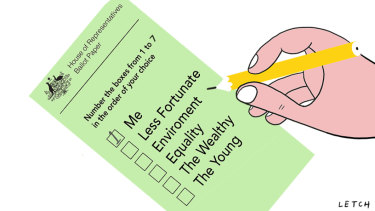 Not this time. This time it’s the government making itself a small target – running on its economic record, with few policy promises bar its $300-billion tax plan – while Labor has so many controversial policies to go with its popular ones the Libs have been spoilt for choice.

Only the naive believe the battle between the classes ever ended, but in this election it’s more in-your-face than any time since the days of Labor’s Arthur Calwell. The Libs say Labor wants to increase taxes rather than cut them, but it would be more accurate to say it wants to make the well-off (including the well-off retired) pay more tax, while using the proceeds to increase government spending on health, education, childcare and much else, with what’s left over used to repay some of the government’s debt.

Labor plans to abolish tax refunds of unused dividend franking credits for those not on the pension, wind back negative gearing and the capital gains tax discount, reduce superannuation tax concessions, tax family trusts and restore for four years the 2¢-in-the-dollar budget repair levy on income above $180,000 a year, not to mention cancel the second and third stages of the Libs’ tax cuts.

In other words, Bill Shorten and Chris Bowen plan to use both sides of the budget to affect the biggest redistribution of income from high income-earners to low and middle income-earners we’ve seen in ages. 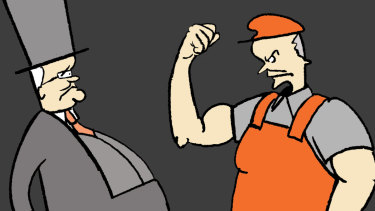 By contrast, the Libs are fighting tooth and nail to protect the tax breaks favouring property investors, self-funded retirees, high-income superannuation savers and business people who’ve gone for years using family trusts to reduce the tax they pay – most of which concessions were introduced by the Howard government.

As well, the Libs’ seven-year, three-stage, super-mega tax plan would favour high income earners – individuals earning more than $100,000 and, particularly, $200,000 a year – to a degree more generous/blatant than I can remember.

Next, more than ever before, this election sees Labor going for the young vote (negative gearing, better childcare, preschool and universities) while the Libs defend actual and prospective self-funded retirees.

Except for Scott Morrison’s last-minute, few-details first home loan deposit scheme (which Labor matched within an hour or two). It sounds better than is, mainly because access to it would be limited. Further falls in house prices would do far more to help – but no pollie wants to say that.

Then there’s the minor matter of the adequacy of our contribution to the Paris Agreement’s effort to limit global warming. Here, too, the choice is wide, ranging from the Coalition (just pretending) to Labor (real but inadequate) to the Greens (full blast).

All that remains is a threshold question: will your choice be aimed at benefiting yourself and your family, or the wider community and “those less fortunate than ourselves”?