Artist Tania Wursig was initially disappointed her renaissance-style family portrait of lesbian power couple Nikita Majajas and Charlie Villas did not make the final cut for this year’s Archibald Prize. 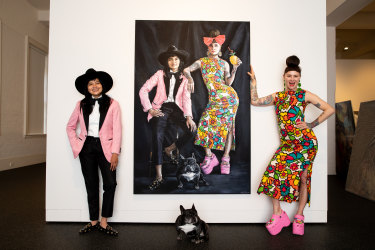 DJ Charlie Villas and her wife Nikita Majajas with dog Ms Peaches in front of the painting of them by artist Tania Wursig which has been voted people’s choice in the Salon de Refuses at SH Ervin gallery in an online people’s poll.Credit:Edwina Pickles

She had painted the Bardwell Park pair, a DJ and fashion and jewellery designer, along with their ageing French bulldog, Ms Peaches, over three weeks in her Rozelle studio.

When she delivered the painting she called Chukita to the Art Gallery of NSW, one of 938 hopefuls, she hoped she would be among the 52 finalists to grace the gallery’s walls in the century-old portrait prize.

Instead, her work was selected in the Salon des Refuses exhibition, and on Thursday was named people’s choice by an online poll of National Trust members.

Although the show at the Trust’s S. H. Ervin gallery was open for only three of the 10 weeks it was supposed to, gallery director Jane Watters said the portrait was a clear favourite for voters. Usually visitors to the gallery elect a winner, but voting went online for the first time because of COVID-19.

“The voting was like in elections, the trend starts early, the favourite emerges and stays,” Ms Watters said.

Wursig said she was thrilled to win the Holding Redlich People’s Choice Award after hours of painstaking work to recreate the finer details such as Nikita’s tattoos and Charlie’s Gucci bow-tie.

“I loved painting these two as they are leaders within the LGBTQI+ community. Passionate fashionistas, Nikita is the founder of cult Pop accessories brand Doodad + Fandango, and Charlie has made her mark in the queer party scene playing gigs such as Sydney Mardi Gras. This portrait is a celebration of their love, creativity and the duality of femininity.” 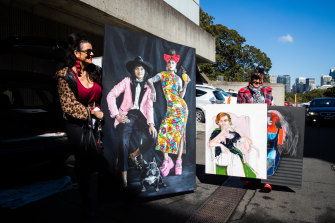 Ms Majajas said she was not surprised Wursig’s portrait won. “It is a spectacular painting … when we saw in the gallery it really stood out,” she said.

“Two childless women with a fur baby,” she said.

The S.H. Ervin Gallery initiated the Salon in 1992 in response to the overwhelming number of entries submitted to the Archibald and Wynne prizes, yet never seen by the public. The gallery will reopen in November with a show featuring the finalists in the Portia Geach Memorial Award.