The troubling wave of violence against Asian Americans across the country has prompted hundreds of volunteers to protect the elderly by escorting them through neighborhoods in Northern California.

More than 3,000 hate incidents directed at Asian Americans nationwide have been recorded since the pandemic began, with many aimed at the elderly. In New York City, police data reportedly showed these violent attacks have increased by 1,900% over the course of the pandemic.

Recently reported attacks include a man pouring acid on a woman in New York City and a 61-year-old being slashed with a box cutter. In San Jose, a 64-year-old grandmother was assaulted and robbed after she used an ATM. An 84-year-old man died after he was shoved to the ground in San Francisco.

Owyoung reached out to Jacob Azevedo after he published an Instagram post offering to escort anyone in Oakland’s Chinatown neighborhood to help them feel safe. The post inspired hundreds to reach out, sharing the same desire to support the community.

Together, Owyoung, Azevedo and four others founded Compassion in Oakland in February, an organization that pairs volunteer chaperones with elderly Asian Americans who may feel unsafe going on walks or running errands. The group also helps write police reports and provides translation assistance when necessary.

Within days, they had nearly 300 people ready to join. Now, more than 700 volunteers have signed up. The group is working to grow new chapters nationwide and hopes to serve more communities.

“When somebody doesn’t understand someone, when there’s a language barrier or differences in culture, it’s easy to lack compassion because it’s different or foreign. We really just want to bring unity,” Owyoung said. 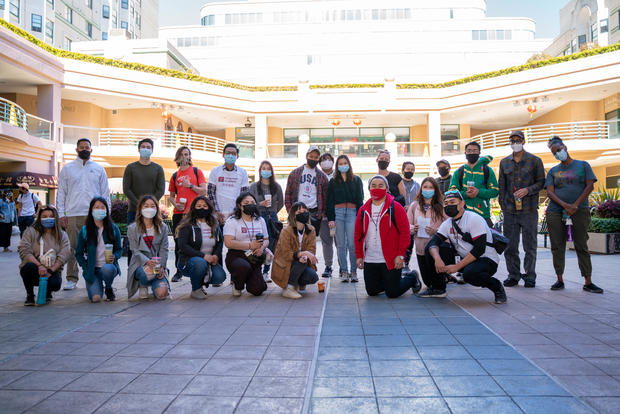 Owyoung said seeing people who look like relatives and loved ones getting attacked was “heartbreaking” — but it compelled her to act.

“Asian Americans, we haven’t been taught to speak out and take action. That’s deeply ingrained in our culture. So, it’s almost like a denying of self to actually take action. But I think that everyone has the power to speak up and they have the right to do so,” she said. “I have a voice. I can do something about it. If I don’t, maybe nobody else will.”

Compassion in Oakland asks that all volunteers provide a negative COVID-19 test before registering, and to regularly get tested for the virus.

Manjusha Kulkarni, a co-founder of Stop AAPI Hate and executive director of the Asian Pacific Policy and Planning Council, said violence against the Asian community is not new but has been exacerbated during the pandemic.

“We know that because at Stop AAPI Hate, many of the reports we received were of incidents that perpetrators used the president’s language against individuals in our communities,” she recently told CBSN.

Owyoung said volunteers at Compassion in Oakland come from all racial backgrounds, cultures and ages.

“It’s a beautiful conversation that we have together about our individual experiences … and how we can build each other up, how we have so many commonalities and differences. But it’s what makes America so wonderful.”