Broadway superstar Laura Osnes fired from show for not being vaccinated

A total of four people have now come forward against Alice Ripley, claiming the Broadway star “groomed” and behaved inappropriately toward them when they were minors.

Days after TikToker Brie Lynn became the first to publicly speak out against Ripley, three other people spoke to the Daily Beast to corroborate her story, claiming they, too, were manipulated as teens into forming a “cult-ish,” Ripley-centered fan base primarily consisting of queer girls.

“I felt like I was in a cult, the cult of Alice Ripley,” Liz, a New York City actress who chose to be identified by her middle name, told the outlet in a bombshell story published Thursday. “She finds people who are desperate for love, and she figures out how to fill that hole and then manipulates them with it.”

Liz recalled being stupefied after seeing Lynn’s TikTok video, saying it felt like “a slap in the face.”

“I was in shock,” she said. “All I could do was just sit there. I think I watched it 20 times in a row before I decided to comment on it. It was like reality came back and slapped me in the face from all the things that I’ve suppressed. My body knew. As soon as I watched the video, my body knew. I started sweating, my heart started racing. I was having a trauma response.”

Meredith, another accuser going by just her middle name, also came across Lynn’s video and said that until then she had thought she was “the only one who’s been in therapy” because of the 57-year-old Tony Award winner.

“In the last 48 hours, I realize there are also other individuals who are my demographic who have also felt literally traumatized by this relationship,” Meredith told the Daily Beast.

Fourth accuser Leo — who uses them/she pronouns — claimed to have developed a relationship with Ripley as well, describing their communications in late 2017 as “very intimate.” Leo was 16 at the time.

All four accusers believe the “Next to Normal” star took advantage of girls as young as 13 by stroking their egos into believing they were in some form of a relationship with her. Some said they had looked to Ripley as a mother figure, while others claimed to have fallen in love with the actress. 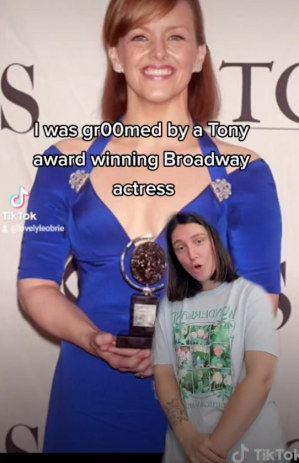 Original accuser Lynn spoke to the Daily Beast too, saying she was one of the girls who fell in love with Ripley “because it felt like it was encouraged to feel that way toward her.”

“There were instances where I would bring up a sexual situation that might have involved a specific sexual act, and she was not shutting down those conversations, she was participating in them,” Lynn alleged. “She was responding to this back and forth. I’m 25, I can’t imagine getting a message like that from a kid and doing anything other than immediately leaving the conversation.

“I was a child who had recently come out as gay and I idolized this woman,” Lynn further explained in a follow-up to her initial TikTok video. “However, with her being the adult in that situation, I realized that she should have shut those conversations down immediately. She should have stopped talking to me immediately, and she did not. She pursued a friendship with me despite the fact that we had these conversations.”

Addressing Lynn’s accusations, Ripley told Page Six on Monday, “Recently, a claim has been made online against me. There’s absolutely no validity to any of it. I appreciate everyone’s continued support.”

Ripley subsequently wrote in a since-deleted Instagram caption, “A piece of trash’s attempt to mar my world = a sad, shameful and discarded cigarette butt #failed,” per the Daily Beast.

None of the accusers have accused Ripley of having sex with them or engaging in physical sexual activity.

Page Six has reached out to Ripley for additional comment on the latest accusations.