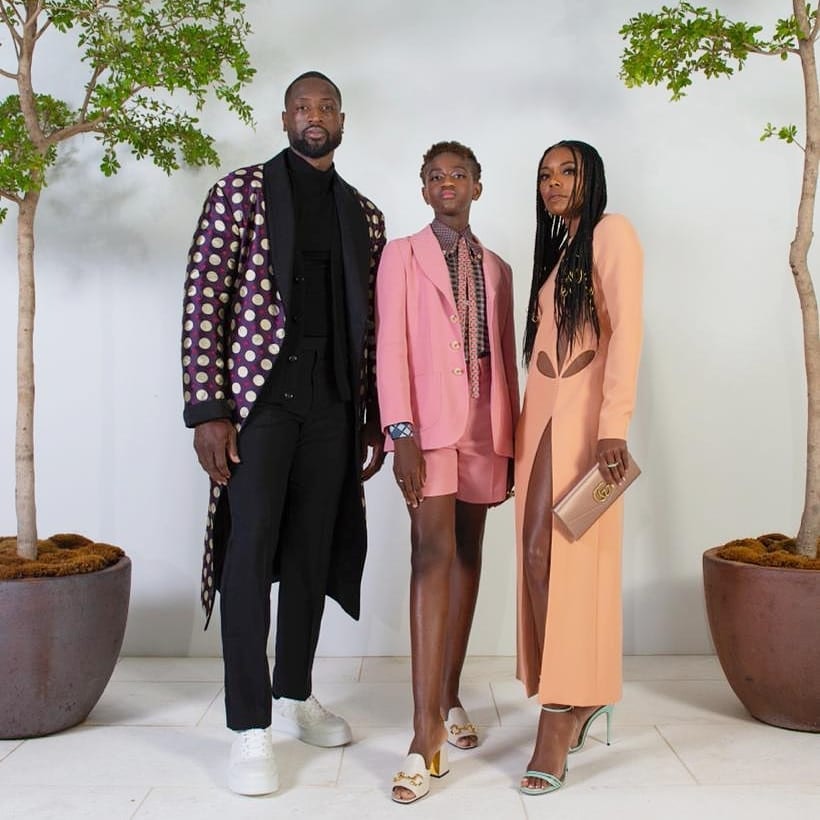 The Gucci Love Parade on Hollywood Boulevard last night was a family affair for the Union-Wades. Dwyane Wade, Zaya Wade, and Gabrielle Union-Wade stepped out in head-to-toe looks by the Italian fashion house, proving that Dwyane and Gabrielle are not only a power fashion couple, but heads of quite a fashionable brood as well.

The threesome took pictures for Instagram before heading to the show, which took place along the Hollywood Walk of Fame. Dwyane showed off his all-black ensemble which he spiced up with a long, purple and white polka-dotted coat on top. Zaya, meanwhile, opted for a pink short suit set, with a patterned shirt and tie, and a pair of horse-bit sandal slides. Gabrielle finished off the famous family with the most streamlined of the three looks—a sherbert orange long-sleeved dress with some cutouts at the hips and a slit. She kept up with her colorful dates by pairing the garment with a light blue sandal stiletto.

This is hardly the first time the Union-Wades have proved their style chops. Just last week, Gabrielle and Dwyane stepped out in coordinating Prada looks and at just 14, Zaya is already regularly showing off looks by Miu Miu, Burberry, and more on her parent-run Instagram.

While at the event, the Union-Wades mingled with some other basketball-adjacent guests, including Vanessa and Natalia Bryant, the wife and daughter of the late Kobe Bryant, and Magic Johnson’s wife and son, Cookie and EJ. And while Gabrielle, Dwyane, and Zaya took a seat when the show began, they got their own walk down Hollywood Boulevard before the models’ entrance, arm-in-arm as a family.