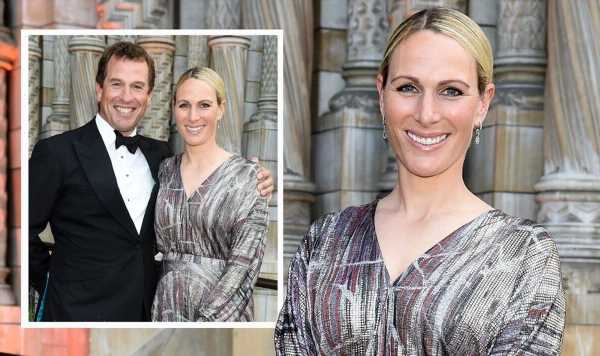 Zara Tindall joined brother Peter Phillips for a charity ball earlier this evening. The Queen’s granddaughter wore a grey and purple metallic maxi dress and silver heels as she posed outside the National History Museum, in central London with Peter in a tuxedo.

The dress Zara chose is believed to be from the brand Ba&sh.

It is the Synthetic Santana Metallic Printed Knitted Maxi Dress in Light Grey.

Several retailers priced the dress at £147, but it is listed as out of stock.

It has long sleeves and a V-neckline, coming in at the waist before billowing down to the ankles.

There was one slit up the side of the dress, and as the wind blew it revealed Zara’s heels.

On her feet were silver heels, with a strappy cross detail over the front of the foot.

Zara accessorised her outfit with a silver clutch bag and silver rings.

On her ears were silver drop earrings and she had swept her hair back into a low updo.

The event aims to raise the vital funds for the conservation organisation, which work with partners to preserve critical habitats, protect endangered species, and combat the illegal wildlife trade across Africa.

Zara and Peter were joined by a sleuth of celebrities.

The lavish ball was held in the museum’s Hintze Hall and began with a Champagne reception followed by dinner, entertainment, and live and silent auctions, all topped off with a DJ.

Zara and Peter were not the only royals out today.

Their mother, Princess Anne was in York on a royal visit.

The Princess Royal attended the Freedom of York Parade by 2 Signal Regiment.

Sophie, Countess of Wessex, on the other hand, spoke to CMI Managers about her “passion for women in leadership”

The Duke and Duchess of Cambridge met with the cast of the film and then watched it ahead of it launching in cinemas next week.