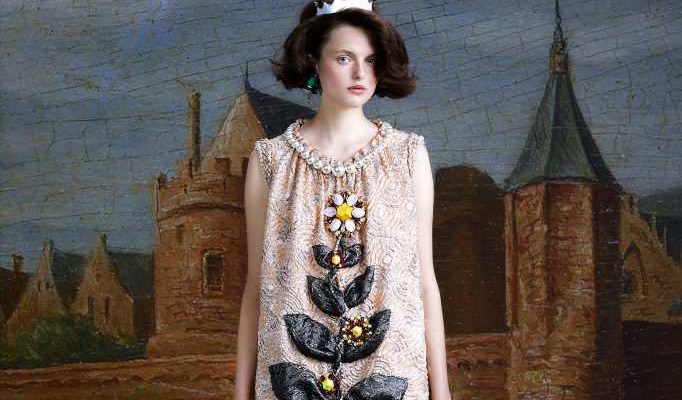 Recent dramas centering around younger generations of royals, and their attempts at appearing more in tune with reality, got Viktor Horsting and Rolf Snoeren thinking about how similar royalty was to the fashion industry. “It made us aware of how similar the need to put on a show is. Or what goes on behind the scenes,” Snoeren said at a preview of their fall collection.

For those in Paris, it was presented in the form of an exhibition at the Chapelle Expiatoire, a neoclassical chapel built on the grounds where Louis XIV and Marie-Antoinette were buried after their execution during the French Revolution, with the participation of curator Thierry-Maxime Loriot, a longtime friend and the man behind the 2018 “Viktor & Rolf Fashion Artists 25 Years” exhibition.

The idea of monarchic power led them to a series of questions, starting with what “royalty” means, the disconnect between the facade of institutions and the reality behind the scenes, to the language used to speak about them.

“We were looking at the language used to speak about royalty and saw how masculine these texts were. Why should it be ‘live like a king’?” said Horsting, who also noted that today, all should feel free to write their own stories and become rulers of their own right.

As conversation starters, the Dutch couturiers offered up larger-than-life silhouettes that revisited the luxurious trappings of a regal wardrobe. Their queens were draped in opulent outfits made of unusual materials.

“We wanted an almost comic-strip feel to the collection, by being very respectful toward materials and couture, referencing its shapes and techniques on the one hand, while on the other hand, taking elements from completely different worlds and mixing them together,” Snoeren said.

Each silhouette was made of a dress, a coat and a sash, which bore witty expressions such as “Royal Pain in the Ass” or “Size Queen,” and made of patchworks of jacquards and cloqué pieces mixed with garish synthetics.

As for furs, longtime signifiers of wealth and power, they were cut from man-made shag or even created from a profusion of raffia to mimic the opulence of an ermine coat or a train made of sparkly “fox fur.”

The crown jewels were likewise recreated as XXL fabric versions, their moiré fabric imitating the effects used on the technical sketches by fine jewelry ateliers. Lashings of Swarovski crystals conveyed the idea of a profusion of generational bling.

What could not be faked is that beneath the irreverence and Instagrammable moments, Horsting and Snoeren remain kings of elegantly laying bare conversations — here, questions around gender equality, sustainability or even the existence of publicly funded royal families.