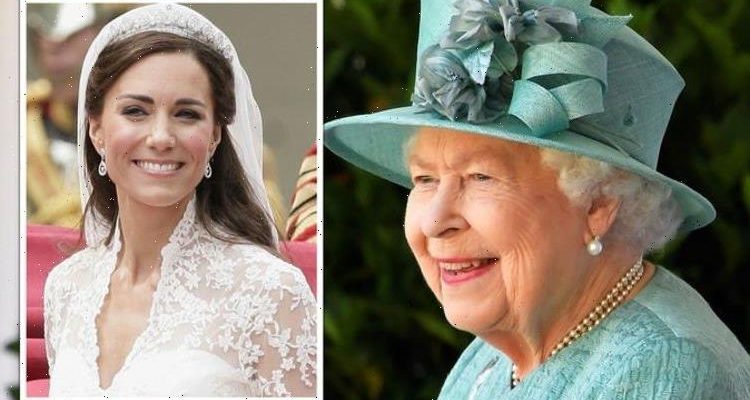 GB News: 'William and Kate doing what Diana would expect'

Being a member of the Royal Family comes with some perks, one being access to the Queen’s enviable collection of gems and jewellery (with the monarch’s permission, of course). Kate, Duchess of Cambridge has worn several of the Queen’s tiaras, necklaces and earrings over the years – here are some of the Duchess’s most memorable instances in pictures.

The Queen traditionally lends a tiara from her personal collection to royal brides on their wedding day.

So when Kate married Prince William in 2011, she opted to wear the Queen’s Cartier Halo Tiara.

The Queen’s father, King George VI, commissioned the tiara in 1936 for his wife, Queen Elizabeth, the future Queen Mother.

The tiara was then gifted to the Queen when she was still known as Princess Elizabeth, to mark her 18th birthday.

Several members of the Royal Family wore the tiara before Kate did at her wedding, including the Queen’s sister Princess Margaret.

The Queen’s daughter, Princess Anne, has also worn the tiara in public, most notably during her tour of New Zealand in 1970.

But the Queen has not been publicly pictured wearing the tiara during her reign.

December 2016: Royal engagement at the Palace

Kate was spotted arriving at a diplomatic event at Buckingham Palace in 2016 wearing the Cambridge Lover’s Knot Tiara.

Kate had also worn the tiara on another occasion the year previous, and would wear it again at several events in 2017, 2018 and 2019.

The Lover’s Knot tiara has significant sentimental value for the Royal Family.

The tiara was created for the Queen’s paternal grandmother, Queen Mary, around 1913.

The tiara was also known to be a favourite of Kate’s late mother-in-law, Princess Diana.

The Queen is thought to have lent the tiara to Diana for her wedding day in 1981, but she opted to wear her family’s Spencer Tiara instead.

But after marrying Prince Charles, Diana was spotted wearing the Lover’s Knot Tiara on several occasions.

The Duchess of Cambridge opted to wear a piece known as the Four-Row Japanese Pearl Choker for the funeral of Prince William’s grandfather, Prince Philip.

The Queen commissioned the necklace after receiving the pearls as a gift from the Japanese government.

Kate previously wore the pearls to mark the Queen and Prince Philip’s 70th wedding anniversary in 2017.

The Queen and Princess Diana wore the necklace on several occasions in the past.