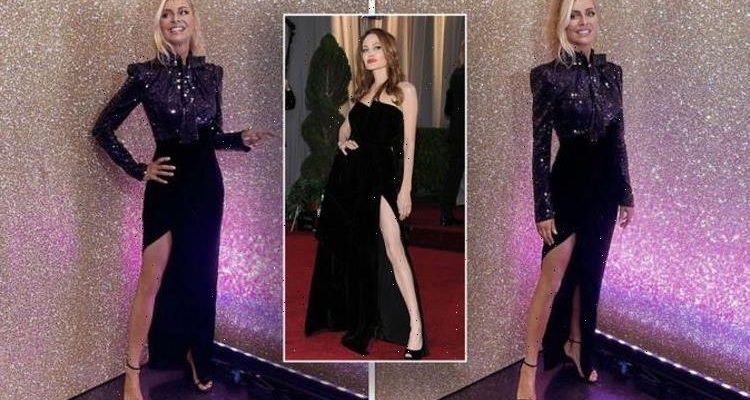 Tess Daly, 52, wowed her fans in the dress, which was black and featured a severe split on the left leg. Taking to Instagram ahead of tonight’s Strictly Come Dancing, Tess wrote: “Here we go again!”

She tagged her stylist, James Yardley, who revealed the dress is by Israeli designer Galia Lahav in his own social media post.

Dresses by the brand sell for thousands of pounds, and they are famed for their stunning wedding gowns.

But it was most definitely not a wedding dress Tess was in tonight – the blonde bombshell opted for something far more sexy than most brides would wear.

With one leg entirely on display, the black dress inevitably called to mind Angelina Jolie’s infamous 2012 Oscars dress, which was nicknamed “The Leg” at the time.

Angelina’s dress was by Versace, and has been much copied since.

As well as the thigh split, Tess’ dress featured a shimmering top with a ruffled neckline and padded shoulders.

She paired the dress with strappy sandals and a high ponytail.

A long wave of curled hair was left out of the ponytail to frame her face.

During the opening scenes of this week’s episode, the judge could be seen putting on an eye-popping display.

Her all-black ensemble featured a deep cleavage that had fans on Twitter worried she might “pop out”.

@popboy84 wrote on Twitter: “Shirley Ballas be careful when moving as I think it will all pop out that dress if your not careful unless you want it to for the male celebrities you fancy ha ha #StrictlyComeDancing #strictlyspoiler #strictly2021 #strictly.” [sic]

Claudia Winkleman, meanwhile, plumped for red tonight – and like her co-host, chose a high split dress.

Tomorrow night will mark the first of this year’s series to see one couple leave the show.

The couples’ scores from last week will be carried over and added to their scores this week, indicating who is top of the leaderboard.

The first Strictly 2021 live show was a huge hit and the BBC saw viewing figures fly after the series opener.

Actor Greg Wise could be set to face the first elimination. According to Ladbrokes, 53 per cent of all elimination bets over the past week have been in favour of Greg leaving, at odds of 7/1.

Next in line are Ugo Monye and Sara Davies, both with odds of 5/2.

Rugby star Ugo was partnered with Oti Mabuse, which could mean the professional is out of luck for a hat trick win this year.

Other names thrown into the ring to be eliminated first are TV chef Tilly Ramsay at odds of 5/1 and Loose Women star Judi Love at odds of 6/1.