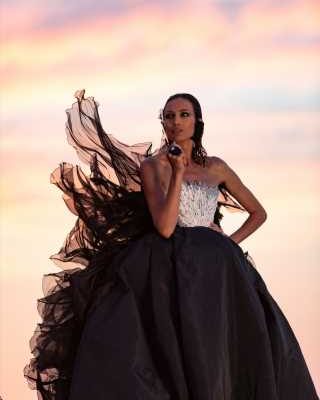 Stéphane Rolland set out to offer generous dresses, but he also served up extra drama. His film presentation drew on the forceful side of nature, with pounding waves, dark skies and bluffs with jagged edges serving as a backdrop for his striking silhouettes. The wind tugged at the fabrics, and filled the hood of a red satin ballgown, further exaggerating its voluminous proportions.

“When you see this red dress — the girl walking on the beach with the storm rising, with the wave — phshhh! like this — and suddenly you have the wind and the capuche like this and the skirt like that,” said Rolland, using the French term for hood, describing the film’s scenes on the beaches of Biarritz from the label’s white-carpeted town house in the 17th arrondissement of Paris.

Nieves Álvarez modeled the pieces, walking along a thin seawall as the fabric of her yellow silk dress slides over the edge, and later, perched on a rock in long, yellow trousers, defiantly waving her white satin poncho at the agitated water and sprays of foam.

The opening look is all white — a long fitted dress, with a skirt trailing behind, covered piles of frothy organza ruffles, standing upright, like pointed leaves. There was a black dress, too, with a similar technique, only the tufts rose up the back like wings. Just the right dose of drama for the red carpet.

For his embellishments, the designer drew on work by mosaic artist Béatrice Serre. She was introduced to him by a friend, the late gallerist Yves Gastou.

“She’s attracted by the earth, the cosmos, all the energies, and she’s working mosaic like the Romans did — but in a very modern way,” enthused the designer, noting he hadn’t shown her the handiwork she inspired. The red, caped dress had a bustier covered with marble, Swarovski crystals and red coral while a gold, brocade tunic was covered in citrine, amber and marble. Embellishments were reserved for simpler cuts, to keep things balanced.

“If my cut was sophisticated, I would not make it too precious,” said the designer. Rolland also introduced new accessories with the line-up, prominent rings in the form of a flat, polished stone, all white and smooth.

Rolland noted he’s had success with caftans lately as clients entertain from home — and also has drawn up a small collection for men.