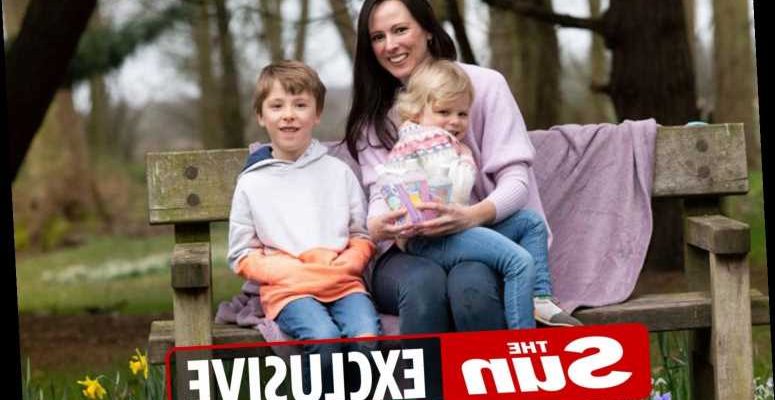 LADY Sarra Hoy has revealed she had daily flashbacks to the "traumatic" birth of her premature baby son and "cried every day for two years".

The mum-of-two, 40, who's married to British cycling legend Sir Chris Hoy, says son Callum looked like a "tiny bird who's fallen out of its nest" when he was born weighing 2lb 2oz at 29 weeks in late 2014. 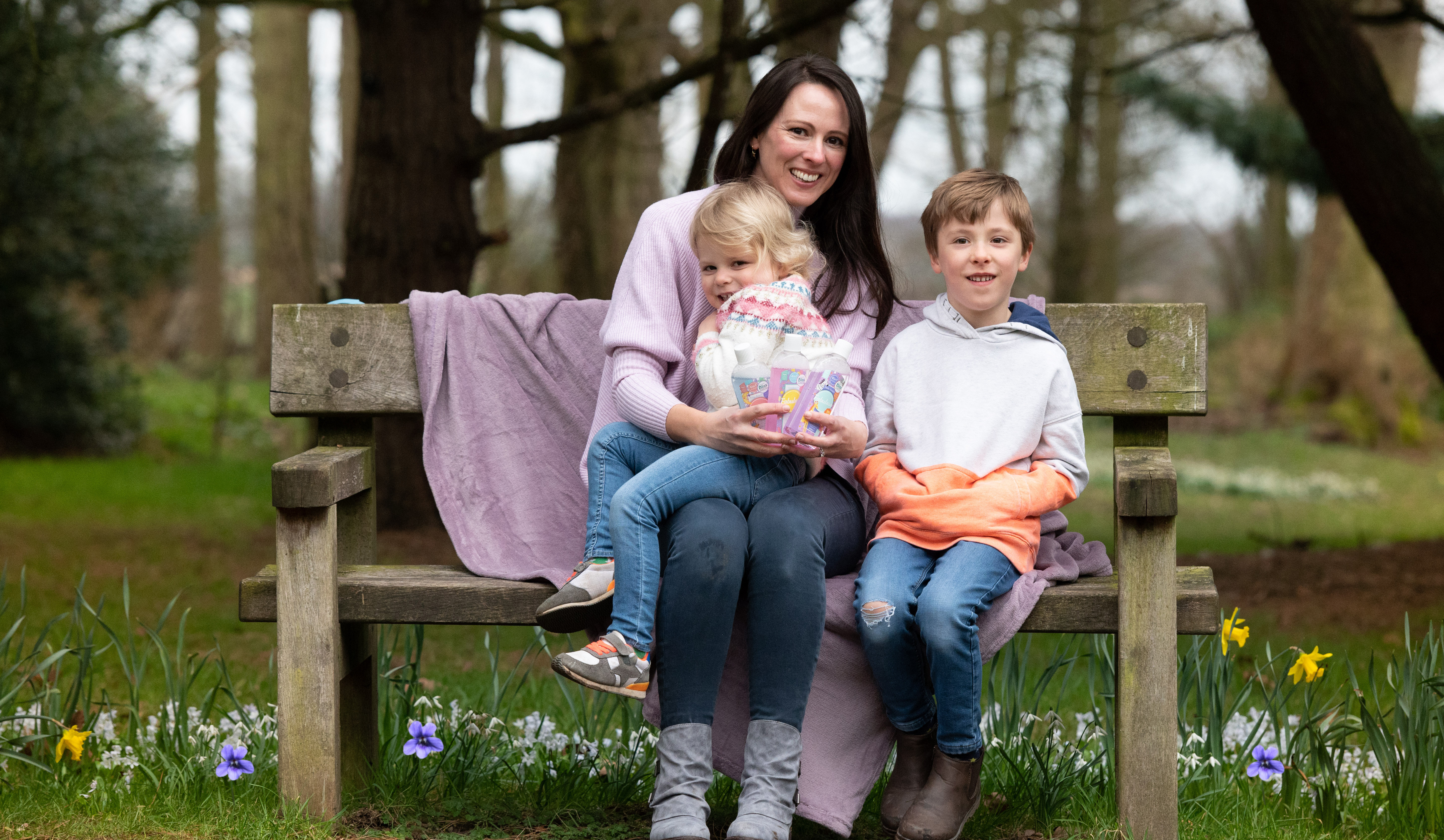 The now six-year-old was born 11 weeks early via emergency C-section, after his mum developed pre-eclampsia and HELLP syndrome, which was potentially fatal for them both.

Sarra spoke to Fabulous to mark a partnership between cleaning brand Fabulosa and Bliss, the UK’s leading charity for babies born premature or sick.

She says: "Initially, my biggest fear was just that Callum wouldn’t live, it is a fight for survival.

"You’re literally taking it hour by hour, then day by day, then the hard part becomes trying to let go of that fear. 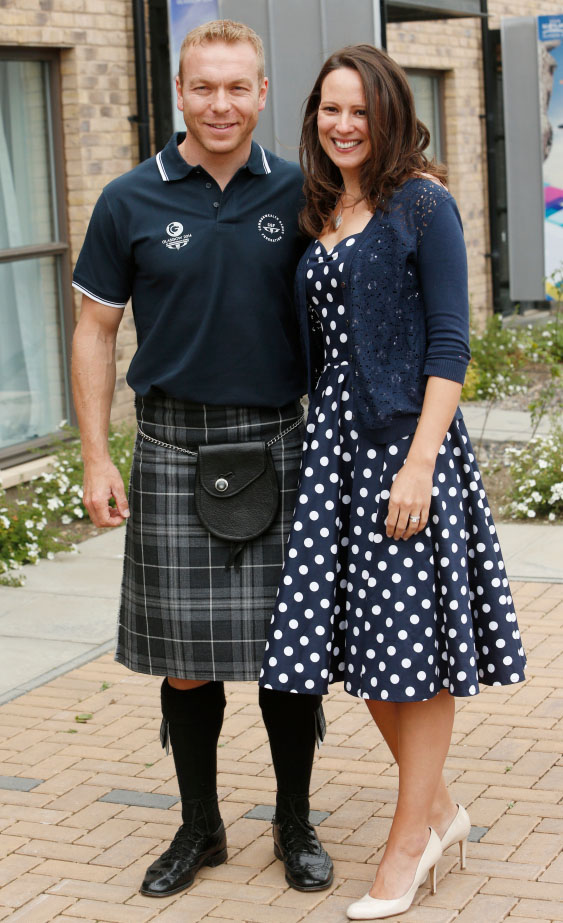 "Once that passes and you think ‘this is actually happening, he’s putting on weight, he’s wearing clothes now, he can breathe by himself’, you have to begin to come to terms with the fact you can let your guard down a bit.

"That’s very hard to do and the fear doesn’t leave you for a long time.

"I would relive it, have flashbacks and cry every day probably for two years. But time is a healer."

I would relive it, have flashbacks and cry every day probably for two years. But time is a healer

Callum was Sarra and Chris' first baby. Three years later they had Chloe, three, who was also born prematurely at 36 weeks.

Although she was tiny at 4lb 4oz, she was double her brother's size and didn't need to be separated from her mother, something Sarra credits to the amazing care of the hospital medics.

It was a completely different story when Callum was born. 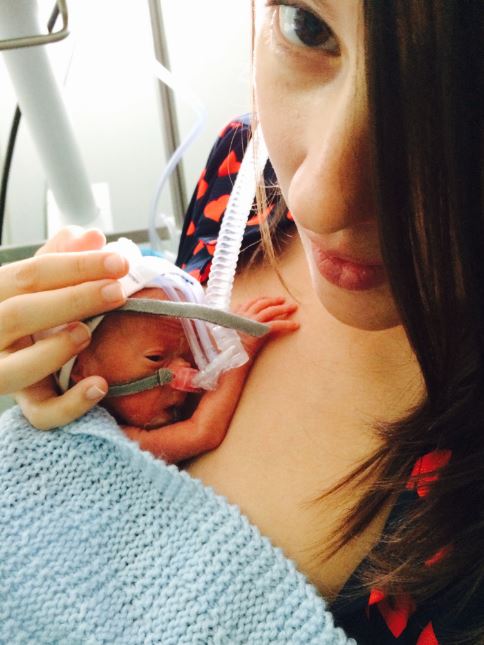 She recalls: "I got sick two weeks earlier, but the first indication it was an emergency situation was just hours before I gave birth.

"It was all so sudden. I had no idea a baby could be born that early so it was really horrifying to think he was coming out so quickly. It's a very shocking and traumatic experience.

"When Callum was born, I didn’t get to see him, apart from at a distance as they tried to stabilise him and get him breathing.

"We didn’t know the sex of our baby and I’d always wanted Chris to be the one to tell me, so thankfully in amongst all of the horrifying moments, and it really was, they managed to show Chris and then he was able to come over and tell me he was a boy.

"That was a lovely moment but I didn’t see Callum properly and didn't see him again for 24 hours."

When Callum was born, I didn’t get to see him, apart from at a distance as they tried to stabilise him and get him breathing

After the C-section, Sarra was stabilised by doctors, while Chris spent time with their son on the neonatal intensive care unit (NICU).

She says: "Chris was able to take me up there 24 hours later, which is when I met Callum for the first time.

"I never really had a bump, I’d just got my first pair of maternity trousers and I hadn’t worn them yet.

"So while Callum was only 2lb 2oz, he was weirdly much bigger than I thought he would have been.

"Obviously in the grand scheme of things he was a very small baby, with lots of wires and machines coming out of him. 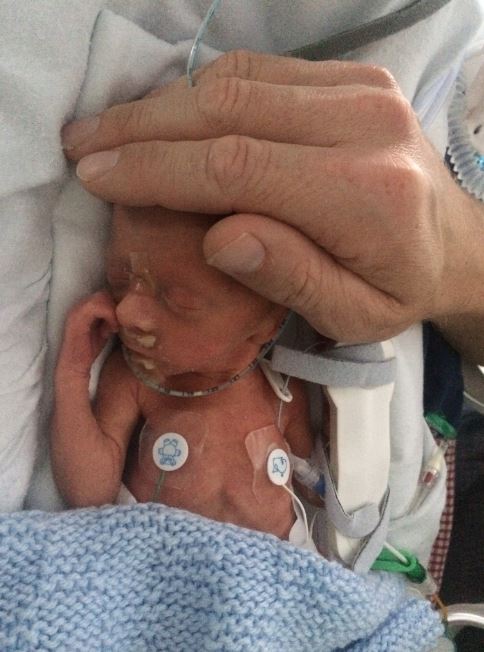 "You have to adapt so quickly, it is a really hard and distressing time.

"I’ve spent so long talking to other mums since then and no matter how different the experiences, the emotions mums describe are all so similar.

"Some people say it’s a rollercoaster and I hate that analogy because it suggests some parts of it are really good fun. None of it is very good fun.

"It’s hard, you’re very tired, you don’t feel well yourself and you’re trying to bond and make sense of the situation you’re in, trying to learn what you can and can’t do for your baby.

They look so, so frail but you learn they’re much more robust than you could ever imagine. These babies are absolutely incredible

"Initially you can’t hold them, you have to wait to be told when you can even touch them because they’re so vulnerable at that age.

"Then you’re having to navigate your way around the equipment that’s keeping them alive.

"For me, there was a lot of fear about touching the wrong thing and dislodging something.

"Your baby's this tiny little thing that looks like a bird that’s fallen out of its nest, with no feathers yet.

"They look so, so frail but as you learn to get familiar with it all, you learn they’re much more robust than you could ever imagine. These babies are absolutely incredible." 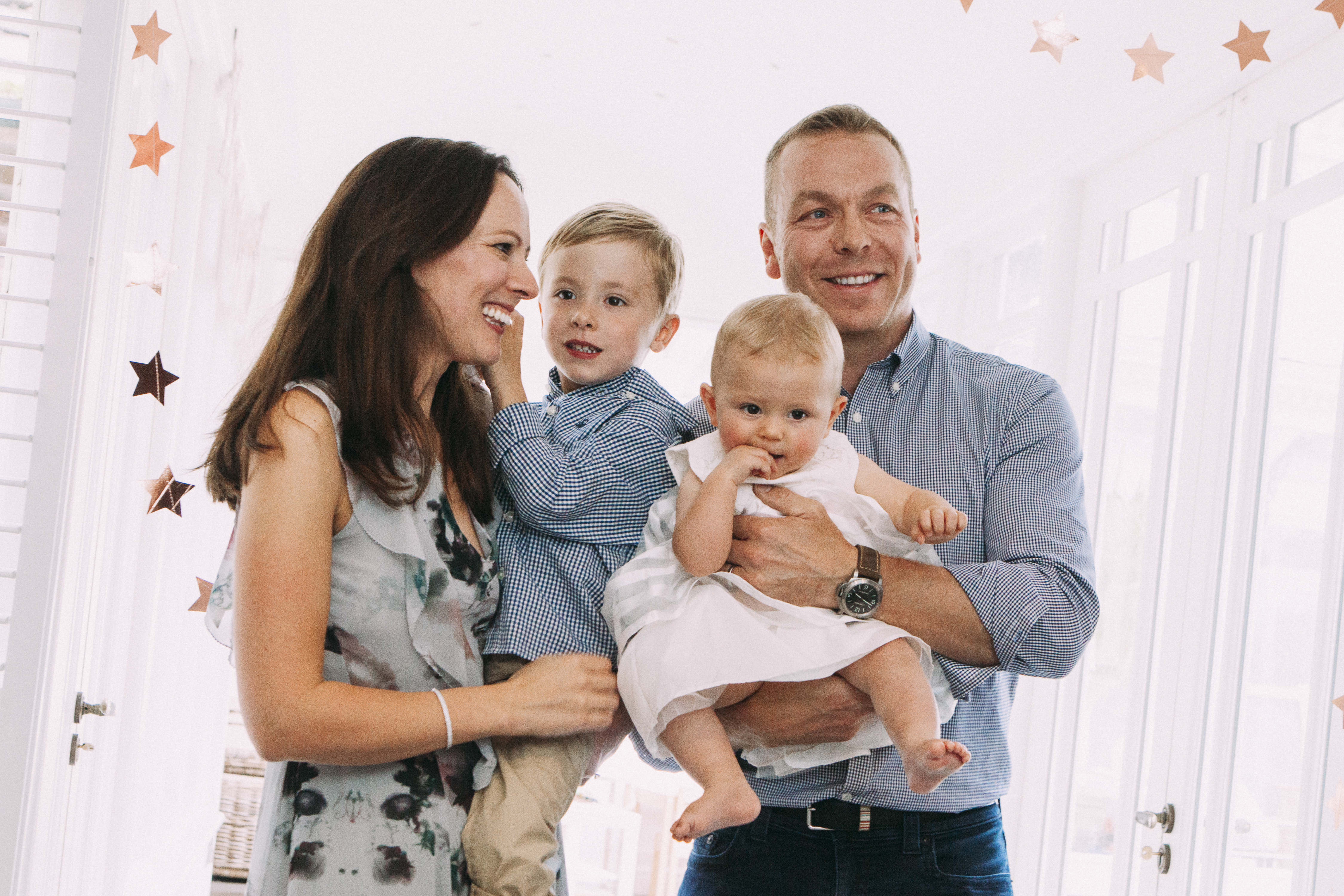 Callum was four days old when his parents were able to hold him for the first time, with Sarra recalling how two or three nurses helped her position the tot without disturbing his equipment.

She says: "It’s very clinical and has to be closely monitored.

"Again that’s scary because you’re worried for your baby and worried that by wanting to hold him, you’re doing him a disservice.

"But you aren’t, skin to skin is good not only for bonding but also for levelling out their heart rate.

"It seems like such an alien thing, you have to learn how to change your baby’s nappies in an incubator with wires and heart rate monitors and often tubes coming out of their chest.

"Putting your hands through two holes into plastic blocks to navigate that is really difficult to learn – and so far from anything you imagined you might be doing with your newborn baby."

Pre-eclampsia is a condition that affects 6% of pregnancies, usually during the second half (from around 20 weeks) or soon after their baby is delivered.

Early signs include having high blood pressure (hypertension) and protein in your urine.

It's unlikely you'll notice these signs, but they should be picked up during your routine antenatal appointments.

If you're diagnosed with pre-eclampsia, you should be referred for an assessment by a specialist, usually in hospital, who will judge how severe the condition is.

You should be monitored until it's time to deliver your baby (normally at 37-38 weeks) by induction or C-section.

HELLP syndrome is a complication of pre-eclampsia, a rare liver and blood clotting disorder.

It's most likely to occur immediately after the baby is delivered, but can appear any time after 20 weeks of pregnancy, and in rare cases before 20 weeks.

The letters in the name HELLP stand for each part of the condition:

It's a dangerous condition. The only way to treat it is to deliver the baby as soon as possible.

Once the mother is in hospital and receiving treatment, it's possible for her to make a full recovery.

Callum was in hospital for two months, but still came home a couple of weeks before his due date.

Sarra says: "We were very, very lucky. There were a whole host of complications but nothing which was insurmountable.

"It was a difficult two months, we were living in Manchester at the time and travelling about 15 miles to Callum's hospital every day.

"I was lucky Chris was around, because he was able to drive me to hospital. He was my rock.

"He was just absolutely wonderful and stepped up to the plate of being a dad straight away. It’s an experience we went through together and really only the two of us know what it was like." 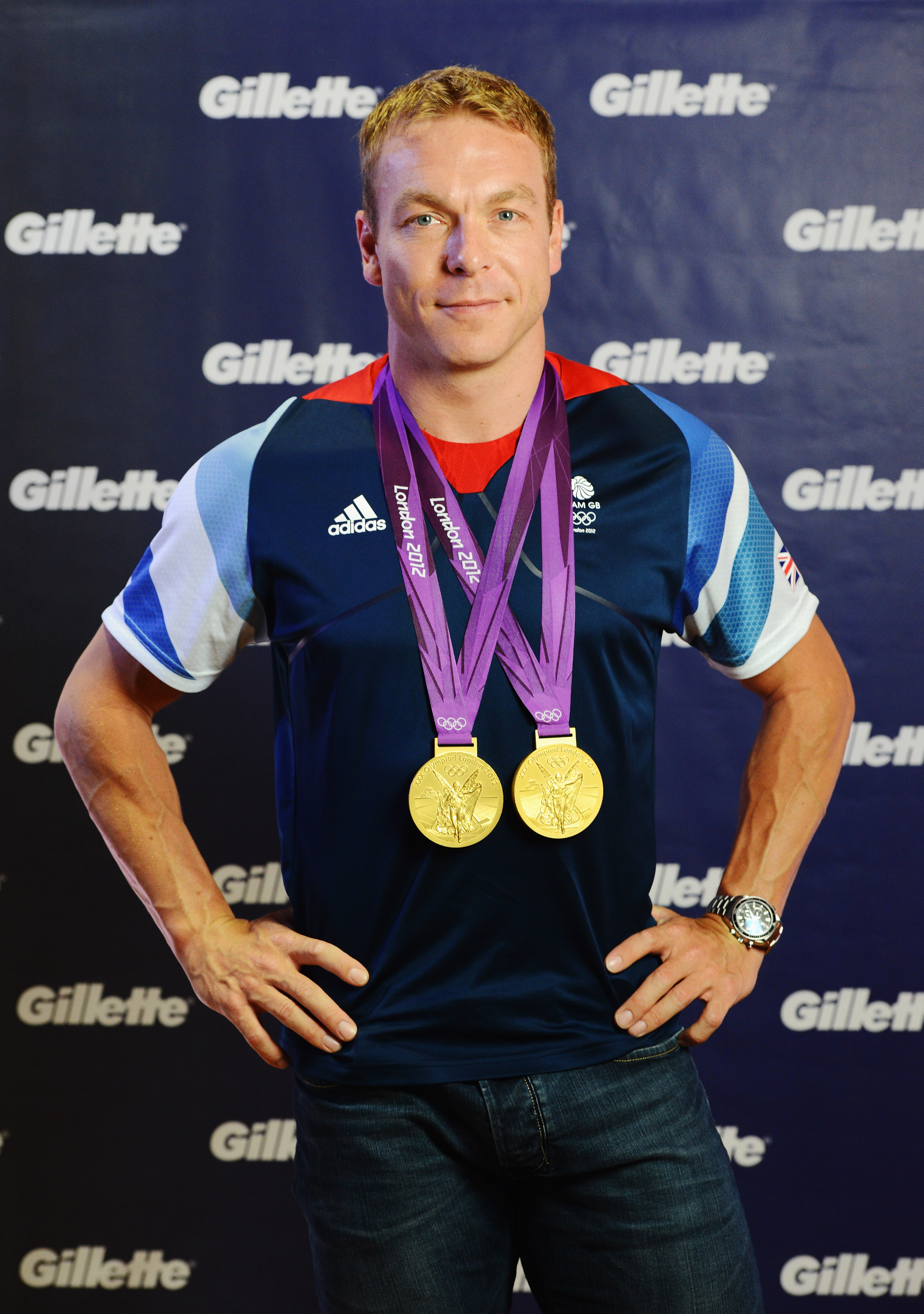 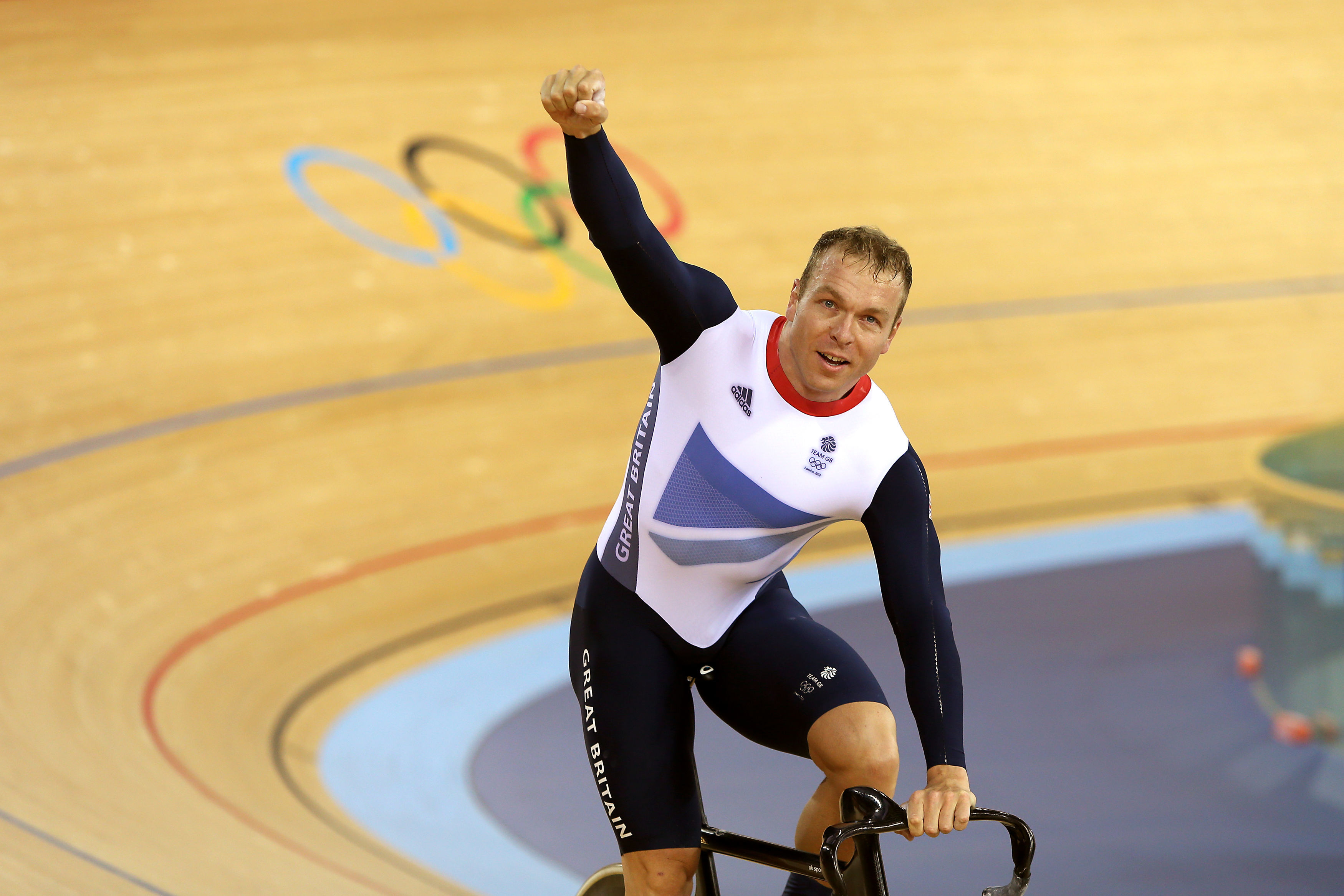 Scot Chris is Britain's joint most successful Olympic athlete, as well as being the world's most successful track cyclist, but Sarra says nothing is more important to him than family.

She explains: "Chris has obviously taken his sport very seriously, but over and above that he’s always been a very loving and committed family man.

"I didn’t see a change in him because that’s the Chris I’ve always known. He’s always been somebody who’s utterly committed to his family even before children.

"Although I wouldn’t wish this on anybody, I feel it’s been an ultimate privilege to be a part of Callum’s life and watch him get through so many challenges to do what most babies are doing straight away.

"The experience teaches you so much." 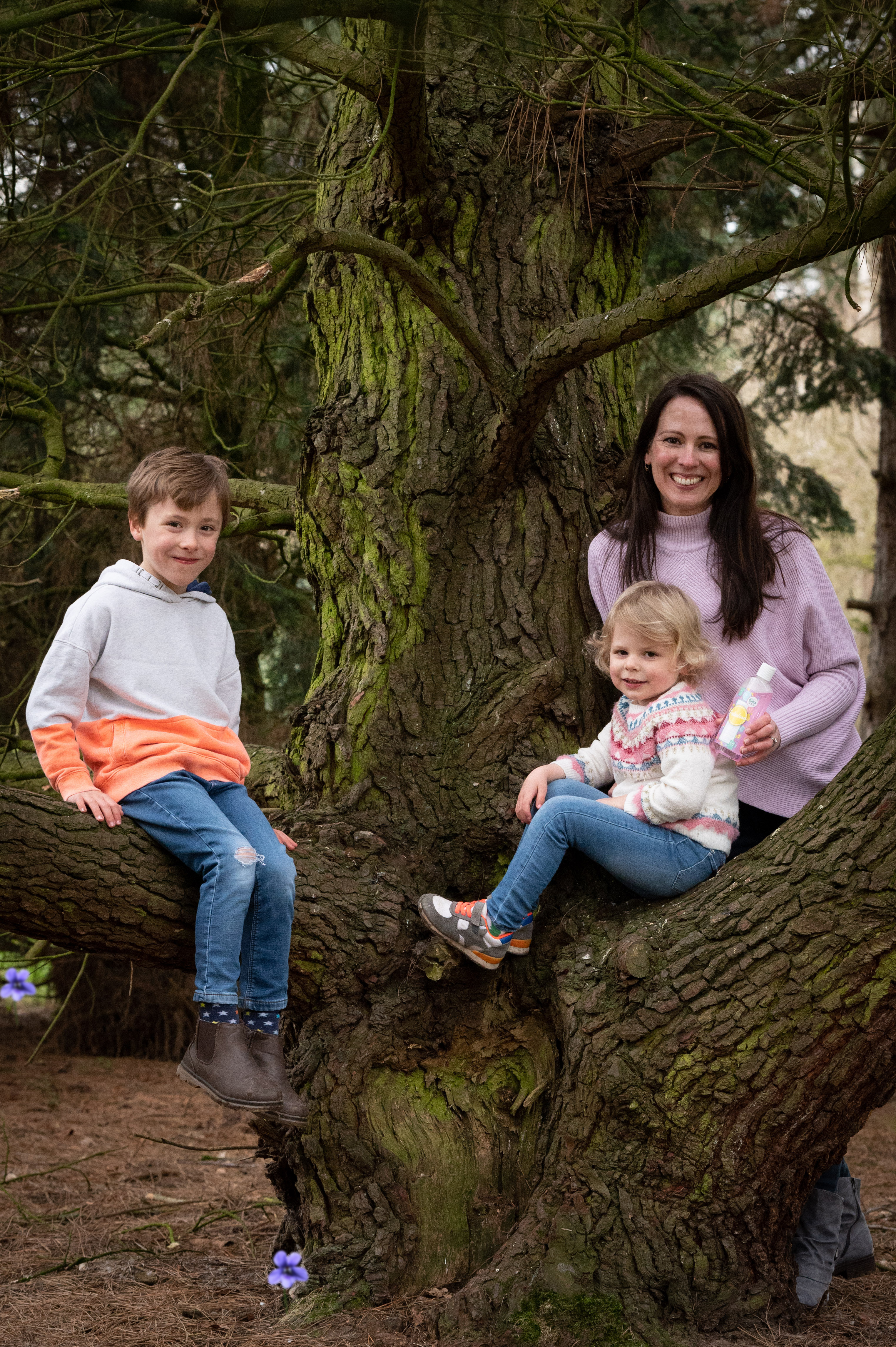 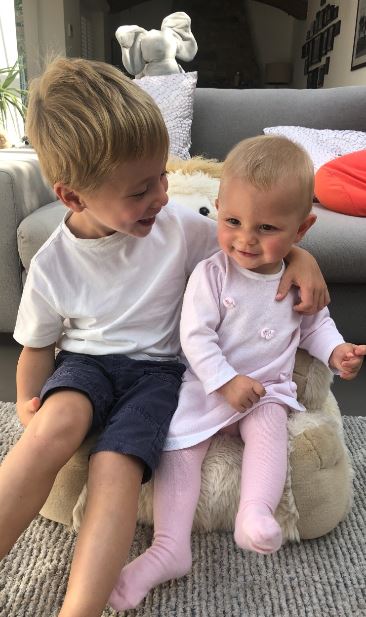 Callum started school in September 2019, something Sarra describes as a "real watershed moment".

She adds: "It was absolutely wonderful, it’s the sort of thing you never dared to think might happen back in those darker days of the neonatal unit.

"He was the tallest in his class and he walked in without looking back, it was just such a proud moment. He’s doing absolutely brilliantly.

"I think this definitely shaped my journey to motherhood but I don’t think it made me more cautious, it just makes you more aware.

"A cold is not just a cold to a premature child, it can have really serious consequences.

"Overall it’s given me a lot more understanding and I never judge other mums because I've realised you never know what someone is going through.

"I think in many ways it’s made me more easygoing. Obviously you have the continued concern for your child but as they grow it eases." 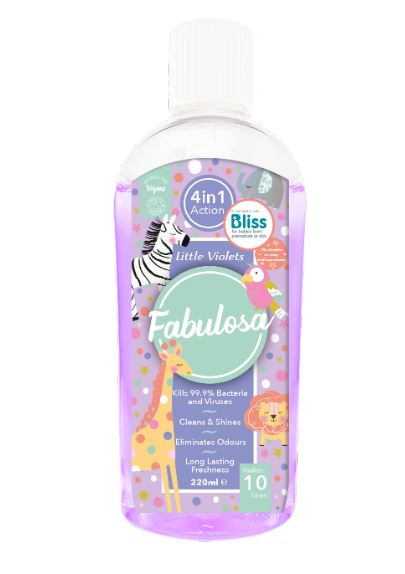 For every item in the range sold on the Fabulosa website, the brand will donate 25p to Bliss, who Sarra is an ambassador for.

The partnership also helps to raise awareness among mums-to-be, as one in seven babies are born needing neonatal care in the UK every year, around 100,000 babies.

Sarra says: "I think a partnership with a cleaning company speaks for itself, the importance of hygiene has come up for everybody in the last year, but for parents of neonatal babies it's nothing new.

"The idea of self-isolation, quarantine and infection control is something you’re taught from the very first second you walk into a neonatal unit.

"This is not our first rodeo so I think the partnership is a really good fit, and any families who have been through this will understand that."