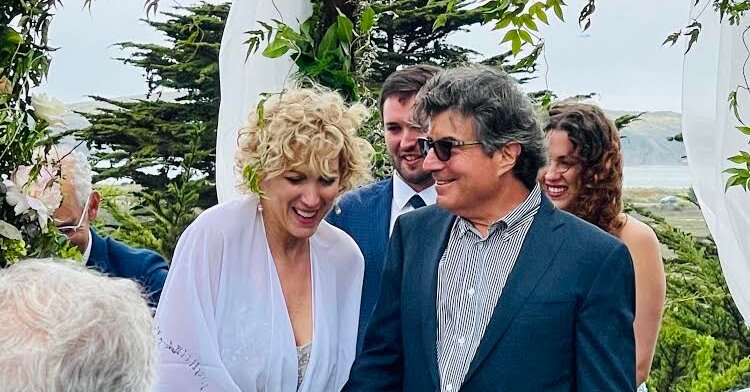 Six weeks after Dr. Lauren Grossman and Glenn Kramon were introduced by mutual friends via email in November 2015, they had not yet spoken to each other, though they were undeniably smitten with one another.

“She had a big mind,” said Mr. Kramon, 68, a lecturer at the Stanford Graduate School of Business and a former assistant managing editor of The New York Times.

“She was also extremely bright,” he said, “and very, very curious.”

Neither, though, seemed curious enough that first month and a half to want to hear the sound of each other’s voice.

Dr. Grossman, 65, who lives in Denver, and Mr. Kramon of Palo Alto, Calif., emailed each other day after day, night after night for six weeks. They never strayed from the comfort of their respective inboxes, ultimately sending a message to family and friends that the doctor and the lecturer — whom she lovingly refers to as “my mad professor” — were more a quirky couple than a conventional one.

“We were introduced by email, so we just continued emailing,” said Dr. Grossman, who specializes in emergency medicine. She is currently the medical director of the UCHealth Integrative Medicine Center, and a faculty member of the University of Colorado School of Medicine, both in Denver.

The following month they finally met in person, at an inn in Evergreen, Colo.

It was a cold and rainy day, according to Mr. Kramon, with a good chance for quirkiness, as Dr. Grossman would soon find out.

Less than an hour into their initial face-to-face conversation in late December 2015, Mr. Kramon produced a notepad filled with dozens of prepared questions, and began interviewing Dr. Grossman for the role of girlfriend.

“There were many doctor-related questions, I had never dated a doctor,” said Mr. Kramon, whose previous marriage ended in divorce. He had already printed 200 pages of their emails and committed them to a leather journal.

Dr. Grossman, whose first marriage also ended in divorce, was delighted. “Call it an old-fashioned courtship, using a new medium,” she said, laughing. “I don’t know anyone who is as passionate as Glenn about anything he does.”

Mr. Kramon, ready and willing to embark on a long-distance relationship, agreed with the doctor’s analysis. “She should know,” he said, “since she happens to be my greatest passion.”

“Lauren loves life and she loves people,” he added. “If she gets down, she never stays down for long.”

They were married June 26 at the Bodega Bay Lodge in Bodega Bay, Calif., before Rabbi Oren Postrel and 110 guests, including the couple’s five combined children.

Also in attendance were the married couple who introduced them, Diane and David Schonberger. “Glenn disliked the idea of a long-distance relationship,” Ms. Schonberger said. “My husband and I agreed that Glenn’s and Lauren’s quirkiness made them perfect for each other.”

Each reduced the other to tears with very-personal, heartfelt vows.

“I profess my love, hopes and promises for us with our magnificent village as witnesses,” the bride said to the groom. “We were upfront right from the start — me writing that it was intimidating to meet a very fine journalist via the written word. You replied that it was a little frightening to write to someone who manipulates blood for a living and not pixels.”

Then it was the groom’s turn.

He promised “to remain as quirky as Diane and David said we both were when they introduced us,” he said, going on to make several other promises, such as “to be your editor, your healer, and to be happier together than apart.”