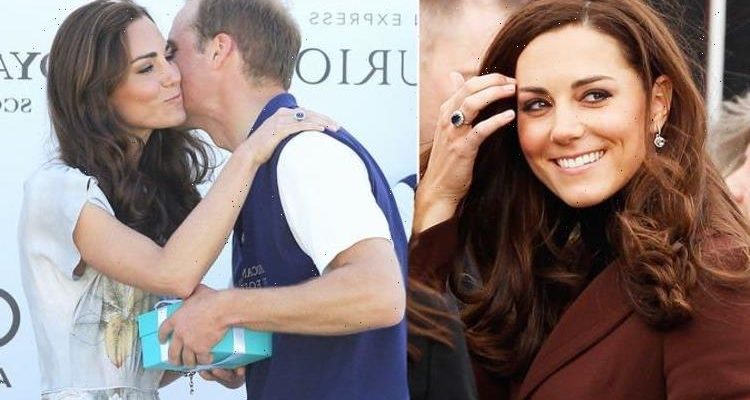 Kate Middleton is rarely seen without the engagement ring she was given by Prince William. The ring is undoubtedly romantic and a jewellery expert has commented on its important link to the Royal Family.

The Duke of Cambridge proposed to his wife with a sapphire and diamond engagement ring.

Many people recognise the jewel as being part of Kate’s attire for the last 10 years.

Before that time, however, it belonged to Princess Diana who was given it as her engagement ring.

The expert explained the Duchess will usually wear the piece with two other rings on her wedding finger and the engagement ring may be the most significant.

“The most eye-catching of the trio is her engagement ring,” he suggested.

“A 12 carat oval sapphire surrounded by 14 solitaire diamonds, it was previously owned by Lady Diana.”

Not only did it once belong to the Princess of Wales, but it is made of sapphires which are particularly significant in the Royal Family.

“Sapphires have long been popular with the Royal Family,” Benjamin continued.

“A favourite brooch of Queen Victoria’s was a large sapphire, given to her by Prince Albert and worn as her ‘something blue’ on her wedding day.

“It was made a Crown Heirloom in her will and Queen Elizabeth has been photographed wearing it on several occasions.”

The engagement ring is full of royal significance and has strong links to the royals, the expert added.

“It was apparently originally chosen as a keepsake by Prince Harry after Diana’s death, but he gave it to Prince William when William intended to propose.”

Prince William choosing the engagement ring for his wife, and Kate wearing it, gives a “special” nod to the Royal Family.

Benjamin added: “Wearing an item with such a strong link to the past and that has been given and shared with such love is truly special.

“It is a stunning piece, very eye-catching and bold.

“This is perhaps why Kate has chosen such simple rings to sit either side of it.

“Instead of attempting to compete with it, they frame it and complement it, providing a perfectly neat, almost symmetrical trio.”

He added: “Jewellery is so much more than an accessory – and Kate’s rings illustrate that perfectly.”

Kate wears two other rings on her wedding finger which are thought to be gifts from Prince William.

This was reportedly given to her following the birth of her eldest son Prince George.