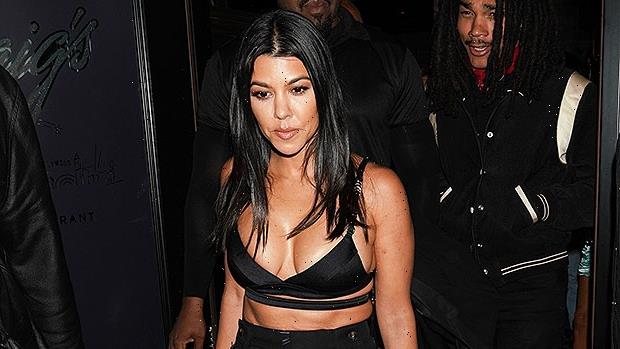 Kourtney Kardashian once again freed the nipple in an edgy new photo.

Kourtney Kardashian freed the nipple(s) in her latest fashion post on Instagram on July 13. Lifestyle website Poosh shared a raunchy photo of their founder, 42, on Tuesday in a black see-through top, leather mini skirt, and fluffy green heels. The picture — pegged to a fashion secrets piece by managing editor Michelle Scanga — covered up Kourtney’s nipples with green heart emojis.

The edgy pic comes amid speculation that Kourtney and boyfriend Travis Barker wed in Vegas earlier this week while attending a UFC fight between Conor McGregor and Dustin Poirier. The Poosh founder shared a series of photos of the two on Instagram and captioned, “what happens in Vegas.” While that alone is not very damning, Kourtney’s hair stylist Glen Coco shared a snapshot of the two on IG and captioned: “NOWWW I understand why ppl tie the knot in Vegas,” adding, “There’s nothing like love AND a good time,” complete with a chapel emoji.

Travis’ daughter Alabama, 15, whom he shares with ex-wife Shanna Moakler, further fanned the marriage speculation flames when she shared a photo of the two on her IG Story and wrote, “So happy for you guys,” complete with heart emojis. HollywoodLife previously reached out to Kourtney and Travis’ reps for comment, but did not receive an immediate response.

The reality TV star and Blink-182 drummer have been publicly linked since February, after eagle-eyed fans noticed that the duo vacationed together in Palm Springs in January. Travis was previously married to Shanna between 2004 and 2008; the two share children Alabama and Landon, 17, together. Kourtney previously dated longtime partner Scott Disick. The duo share children Penelope, 9, Mason, 11, and Reign, 6, together.

While it is unclear if Kourtney and Travis are, in fact, married, the duo already have a little blended family moment going on, bonding with each other’s children since the start of their whirlwind romance. For Kourtney’s 42nd birthday in April, the couple vacationed in Utah with their children. Travis also paid homage to Penelope on her 9th birthday earlier this month, sharing a clip of his girlfriend’s daughter playing his drums.

“Kourtney’s more in love than ever and everyone sees it,” a source previously told HollywoodLife of the relationship. “He’s great with her kids and she’s great with his. She’s formed a bond over the years with his daughter, but it’s nice because they all knew one another before they dated.”