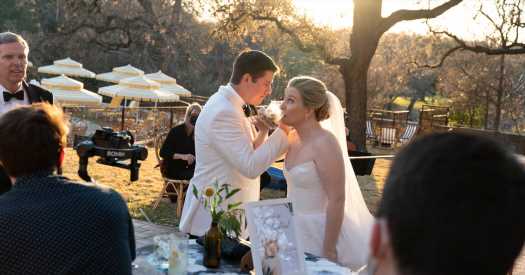 Caroline Gholson had often told Andrew Fallon that she wanted him to propose over coffee — in bed.

“Coffee in bed is our Sunday morning ritual,” said Ms. Gholson, 37, the senior recruiting and development manager in Houston for the law firm Kirkland & Ellis.

“The concept of a public proposal,” she said, “mortifies me.”

She left the rest up to Mr. Fallon, 36, a former executive recruiter in Houston with whom Ms. Gholson shares another ritual: pranking, as in playing practical jokes on each other, like the one she played on him five years ago at a spa in Lake Geneva, Wis.

“I told Andrew that everyone at that particular spa swims in the nude,” Ms. Gholson said. “We went to our respective locker rooms and I changed into my bathing suit, then Andrew walked over to the pool, completely naked, under a white robe.” 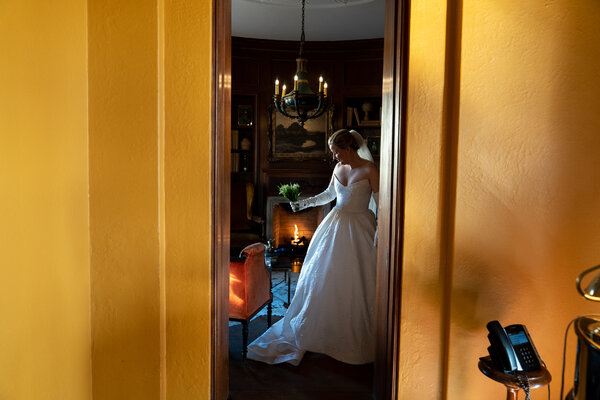 “Once he realized that no one else was naked, he gave me a look as if to say ‘You got me,’ ” she said, “and then he scooted back inside the locker room.”

In November 2015, while both were living in Chicago, Ms. Gholson and Mr. Fallon came together, fittingly, by taking swipes at each other on Tinder. Ms. Gholson, who previously lived in New York for several years, had been in Chicago only five months when her playful rival emerged.

A few days after meeting online, they went on a first date, their night beginning with Mr. Fallon telling Ms. Gholson that a man wearing a trench coat and sitting behind the wheel of a Mercedes-Benz, was his personal driver, — the man was actually an Uber driver whom Mr. Fallon had never met before — which had Ms. Gholson saying to herself, “I guess this Andrew guy is rich.”

The driver, whom Mr. Fallon called “Donald,” whisked the couple away to a restaurant, and by the time the check came, Ms. Gholson and Mr. Fallon, ever the recruiters, had found in each other the prankster they had long been searching for.

“I’ve known Caroline for many years after working together at a law firm in New York — a city where dating is no easy feat,” said Brianna Rose, a friend of Ms. Gholson’s. “When she moved to Chicago and met Andrew within a few months, I sensed he was different. His playful, lighthearted nature was the perfect balance that she had been searching for.”

“A few months later, when we started tossing around the L-word, I asked Andrew what he loved most about me,” Ms. Gholson recalled. “He said, ‘you have the most awesome sense of humor and you are not offended at all by my off-color jokes.’”

Nor was Mr. Fallon offended by the way that first date shook out, ending with a quick hug, nary a word spoken, and Ms. Gholson, four blocks from her apartment, staging a bizarre stunt of her own: She refused to be walked home by Mr. Fallon.

“I liked him so much after that first date, I was at a loss for words,” said Ms. Gholson. “Instead of talking to him, I decided to jog home.”

After spending New Year’s Eve 2015 together, the couple decided to commit, which meant it was almost time to start meeting each other’s families.

Mr. Fallon did just that in July 2016, inviting Ms. Gholson to Pittsburgh to meet his entire family at his grandmother’s 90th birthday party.

When someone at that party asked how Mr. Fallon and Ms. Gholson met, Mr. Fallon’s mother turned to her future daughter-in-law and said, “Yes, tell us about how he spotted you across the room at a bar that first night.”

“What is a Tinder?” she asked.

Their conversation was soon skidding off the rails.

“You know,” Ms. Gholson remembered his mother saying, “he had to push past all those other girls, left and right, until he spotted Caroline across the bar.”

Ms. Gholson soon realized that Mr. Fallon’s mother was telling a story that she could have only heard from Mr. Fallon, whom Ms. Gholson noticed at that precise moment was now sneaking out of the room.

“He got me again,” Ms. Gholson said to herself.

[Sign up for Love Letter and always get the latest in Modern Love, weddings, and relationships in the news by email.]

Ms. Gholson, who graduated from Southern Methodist University and received a master’s degree in learning and organizational change from Northwestern University, where she was a Fulbright scholar, and Mr. Fallon, who graduated from Miami of Ohio and received an M.B.A. from DePaul, could only take educated guesses as to when the other might strike next with a well thought out, perfectly timed prank.

“Some pranks are instantaneous,” Mr. Fallon said, “while certain others, like how I finally proposed to Caroline, play out over time.”

That day began with Ms. Gholson and Mr. Fallon visiting an open house in their Houston neighborhood. Shortly thereafter, Mr. Fallon and Ms. Gholson to take a walk with him in a local park, 15 minutes from their home in the Houston Heights area.

After rounding a corner of the park, the couple found themselves in a large, grassy area, from which Ms. Gholson said she could see “what looked like a bedroom.”

Mr. Fallon suggested that they investigate, and they soon found an air mattress with sheets, a blanket, and pillow, along with a night stand complete with a potted succulent plant.

And then Ms. Gholson noticed, right there on the night stand, two cups of coffee, one labeled with an “A” and the other with a “C,” and when she saw Mr. Fallon reach for them, she shrieked, “It’s just a coincidence, don’t touch that person’s coffee!”

Mr. Fallon then reached for Ms. Gholson’s hands and told her that the bedroom in the park was no aberration, nor did it belong to anyone else.

“You always said you wanted this to happen, to be proposed to over coffee in bed,” he said. “But I wanted to give you a grand gesture, so I split the difference and brought our bedroom here to Memorial Park.”

He got her again — this time forever.

Family members who had helped set up the bedroom scene and friends in secret attendance began running from hiding spots to congratulate the couple.

“I was speechless,” Ms. Gholson said. “But I managed at some point to say yes.”

They were married March 6 at the Commodore Perry Estate in Austin, Texas.

Lt. Col. Charles A. Fallon, the groom’s brother who became an American Marriage minister for the occasion, officiated.

When the bride was asked if she and her new husband had any immediate plans, she said:

“Oh, I have a few things planned that Andrew knows nothing about. I know how much he loves surprises.”

Where The Commodore Perry Estate at sunset in Austin, Texas.

What They Wore The groom donned a custom Loro Piana ivory mohair dinner jacket with a satin shawl lapel collar tailored by Rudi Festari. For the “something old, something new, something borrowed, something blue” tradition, the bride is the third generation to wear a blue satin garter edged in lace made by her great-grandmother. Her new wedding dress was Reem Acra, paired with custom-made opera length kid leather gloves by Wing and Weft.

All in the Family — The couple filled their reception with their families’ own wedding photos as a way of keeping those not in attendance close.