A young couple has become parents of four under two after having IDENTICAL triplets.

The three boys – Archie, Albie and Arthur – were born 12 weeks early and parents Ellie Dudfield, 21, and Billy Revell, 20, were told there was just a 40 per cent chance of survival. 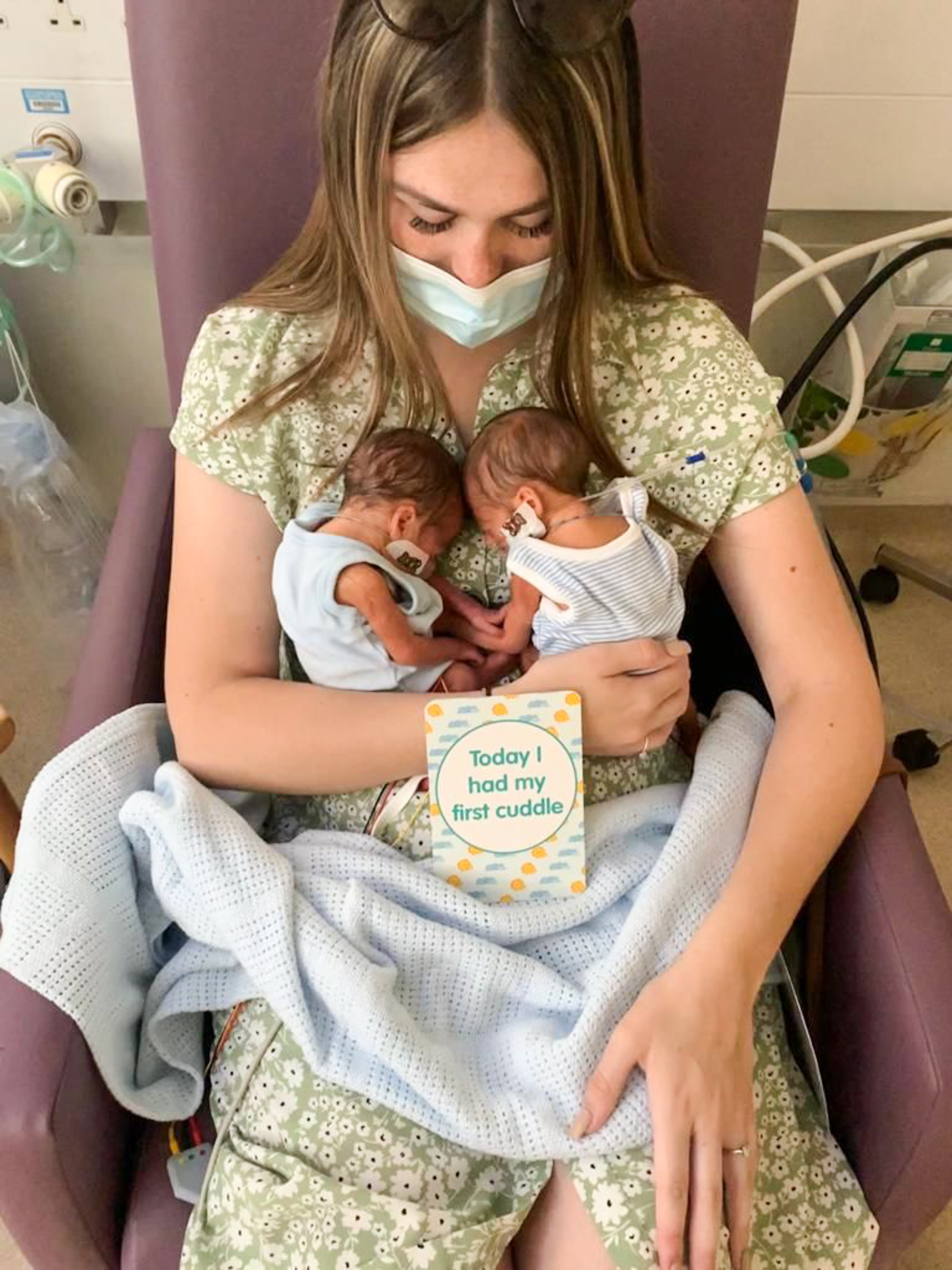 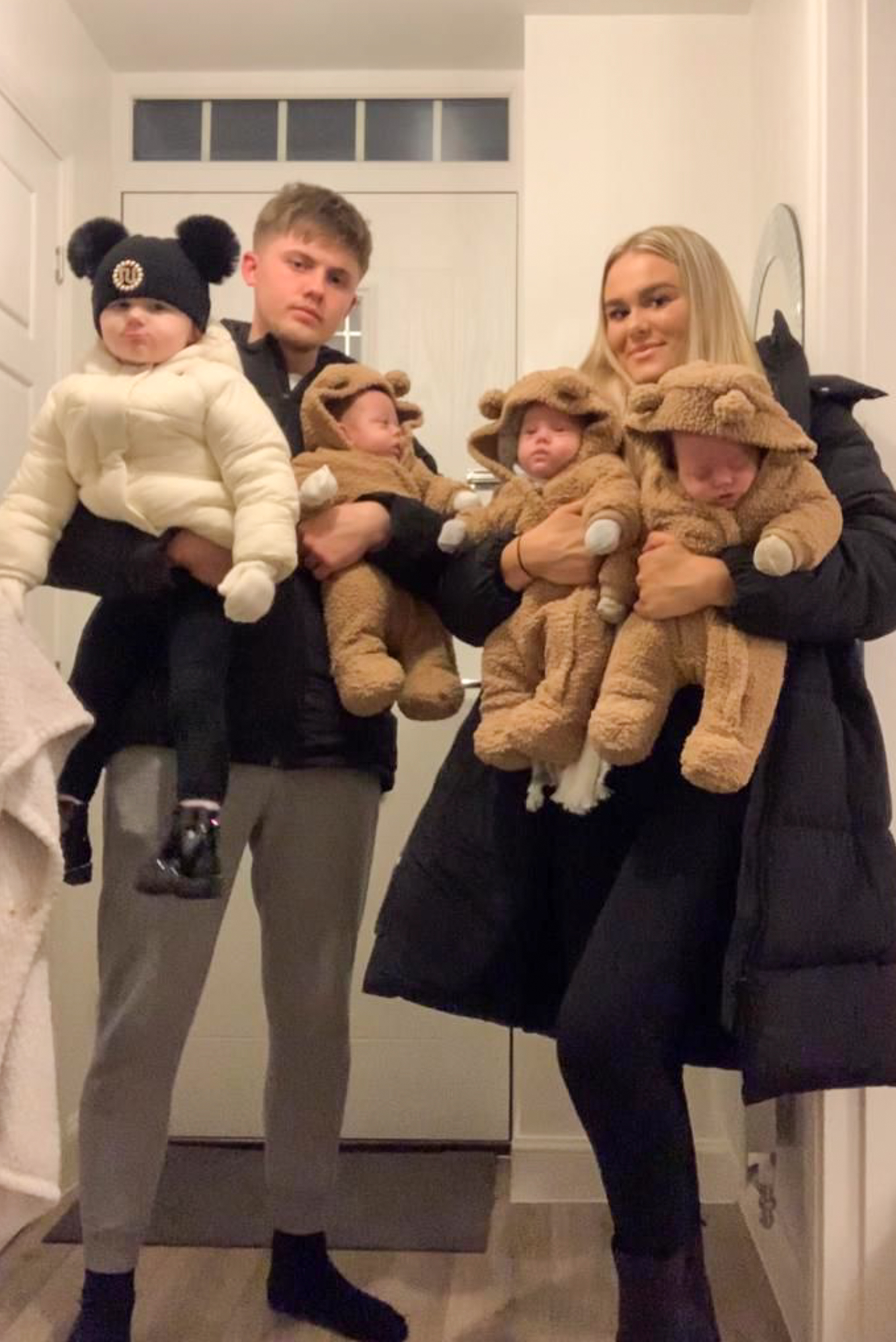 But the triplets – who shared the same placenta – defied the odds and are now at home with their parents and older sister Lola, two.

Ellie, who works for the NHS administrative assistant, admits being a mum of four under two years old can be hard but she wouldn’t have it any other way.

The proud mum from Kettering, Northampton, said: “We obviously don’t have the typical life of other people our age.

“It is hard but we’ve always been family orientated so we have made it work.

Ellie said: "We began saving and sacrificing everything such as date nights, weekends away and buying new clothes when I found out I was pregnant with Lola.

"Fortunately, we were both still living at home – rent-free so we were able to save as much as we can.

"We budgeted on everything, even food.

"It took us a year to save a 10 per cent deposit and we purchased a property using the 'help to buy' scheme.

“The nurses were impressed by how mature we are when we were in NICU with the boys.

“Strangers always stop us in the street to look at the boys and they always say ‘well done’ when they realise how young we are.”

The ‘one in 200 million' set of triplets were born earlier this year on June 30 at 28 weeks and two days following a miscarriage in November 2020.

And if the triplets weren’t rare enough, Arthur was born in his amniotic sac which occurs in less than one in 80,000 births.

They were whisked straight off to the newborn intensive care unit which is when their fight for survival truly began.

Ellie said: “It was an emotional rollercoaster as they were so up and down.

“Archie and Albie had seriously high blood pressure and needed extra ventilation so they were moved to University Coventry hospital after two days.

“It was so difficult having them in separate hospitals and Lola at home with our parents.

“They all had sepsis and jaundice too.

“Albie contracted meningitis around his brain and needed an extensive course of antibiotics.

“Archie had a bleed on the lung and we were told the outcome is likely to be not very good.

“But thankfully the next day he was much better."

Arthur was diagnosed with a Grade four brain bleed at two weeks old and doctors couldn't determine his quality of life.

She adds: "The worst outcome for Arthur could be cerebral palsy, or it could be as minor as needing glasses or having concentration issues.

"We will know more as he begins to reach the expected milestones.

“The triplets had a difficult start to life but Billy, who is a multi-trade operative, stayed strong which helped me a lot. He was so positive.

“Lola hated it because we had never been apart before.”

After 12 weeks in hospital, the family returned home in September.

Ellie said: “It is hard having four babies under two but routine is key.

“Fortunately, the hospital got the triplets into a good routine and fed them every four hours.

“Now, they only wake up once in the night.

“Lola is going through the terrible twos which is the most challenging bit.

“We have to balance our time to make sure everyone is having their fair share of attention.”

The couple upgraded their five-seater car to a seven-seater one ahead of the arrival of the triplets.

The family get through approximately 25 nappies per day and 18 bottles.

Ellie, the busy mum, added: "Luckily, we purchased a three-bedroom house in 2019 so we didn't have to upsize.

"Having triplets and a toddler is a lot of nappies and bottles.

"We get through a tub of formula a day.

"But I wouldn't have it any other day as it is so rewarding seeing them grow up.

"Billy and I absolutely love it but we have no plans on having another baby!" 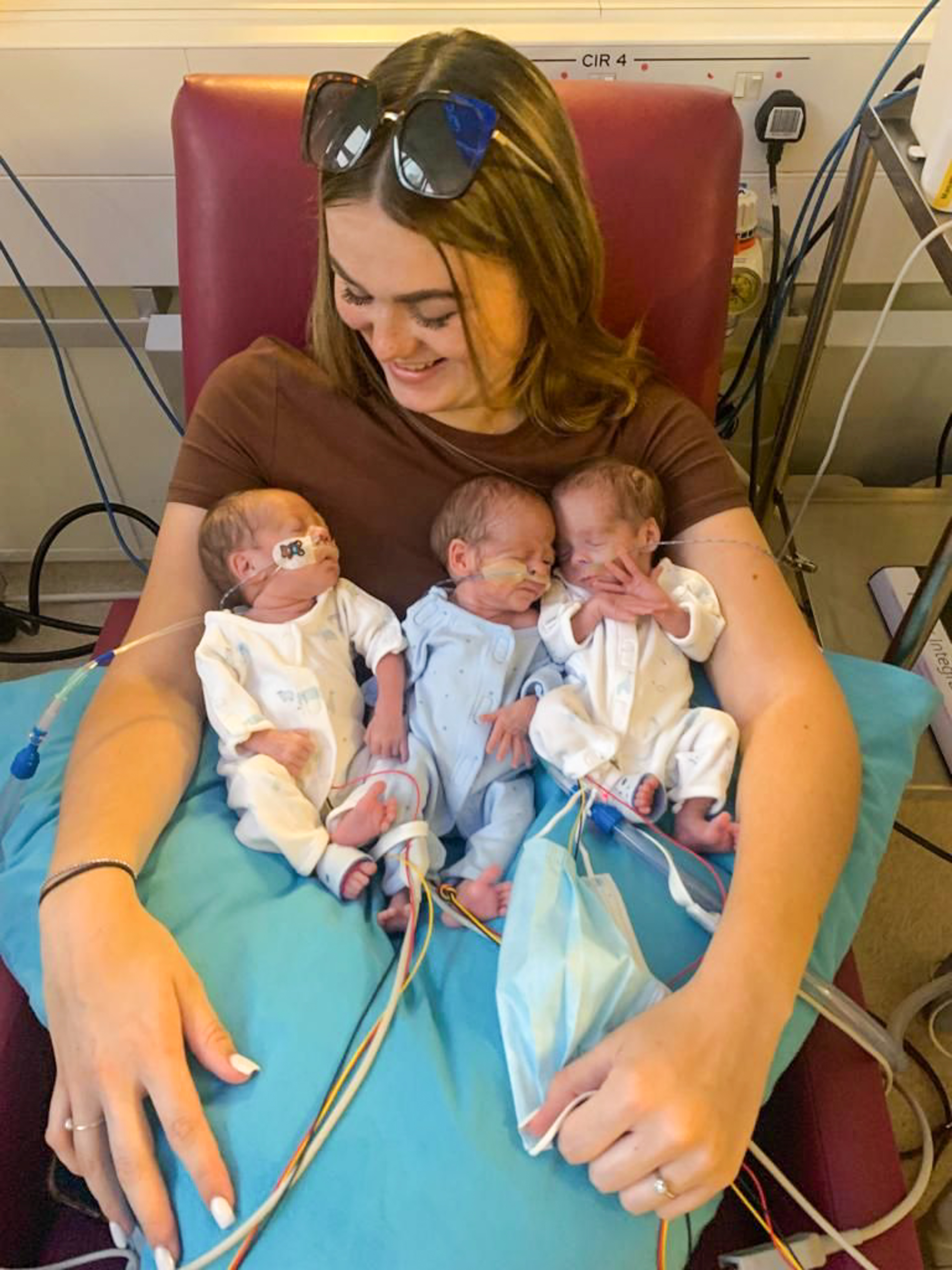 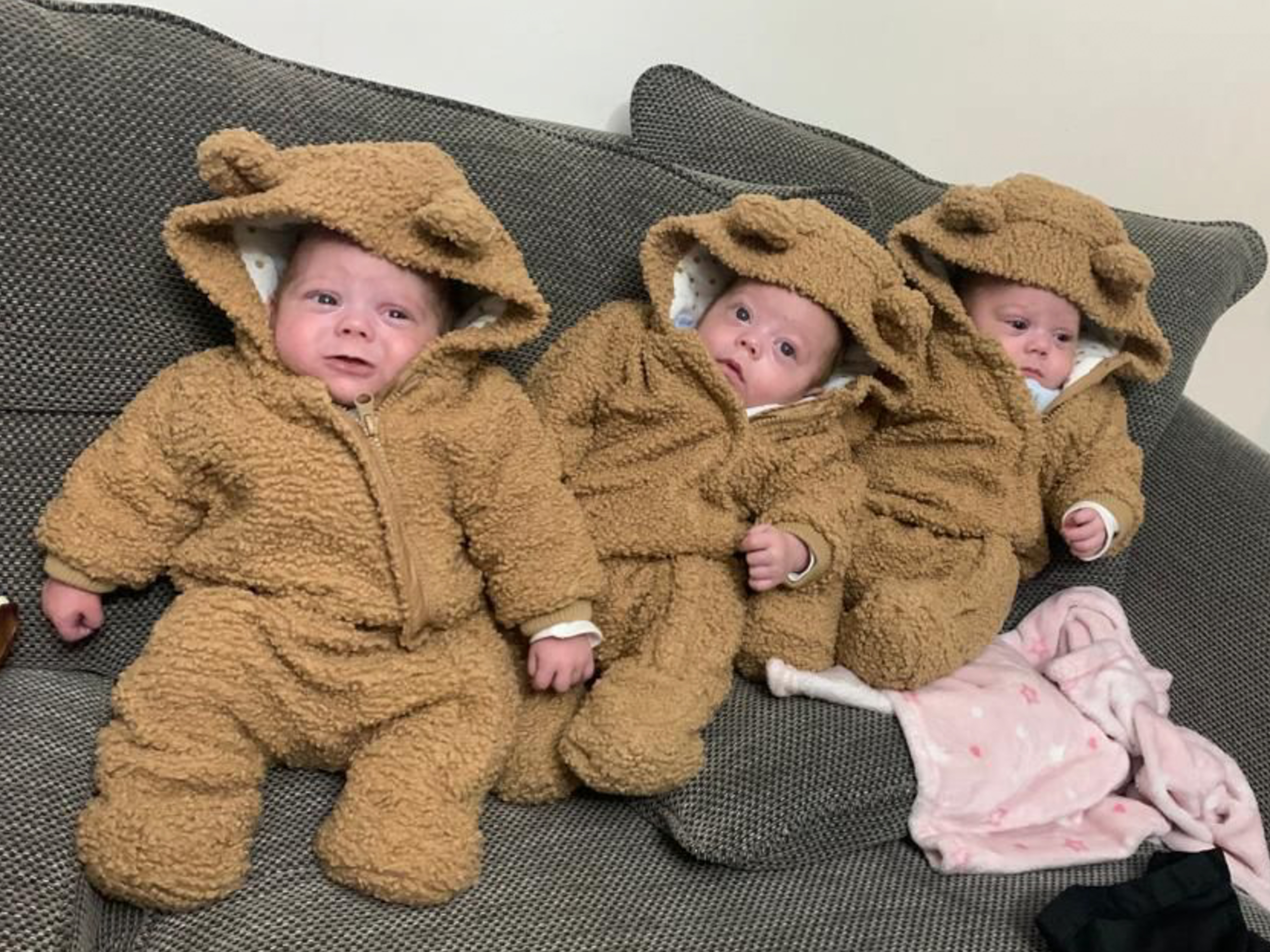 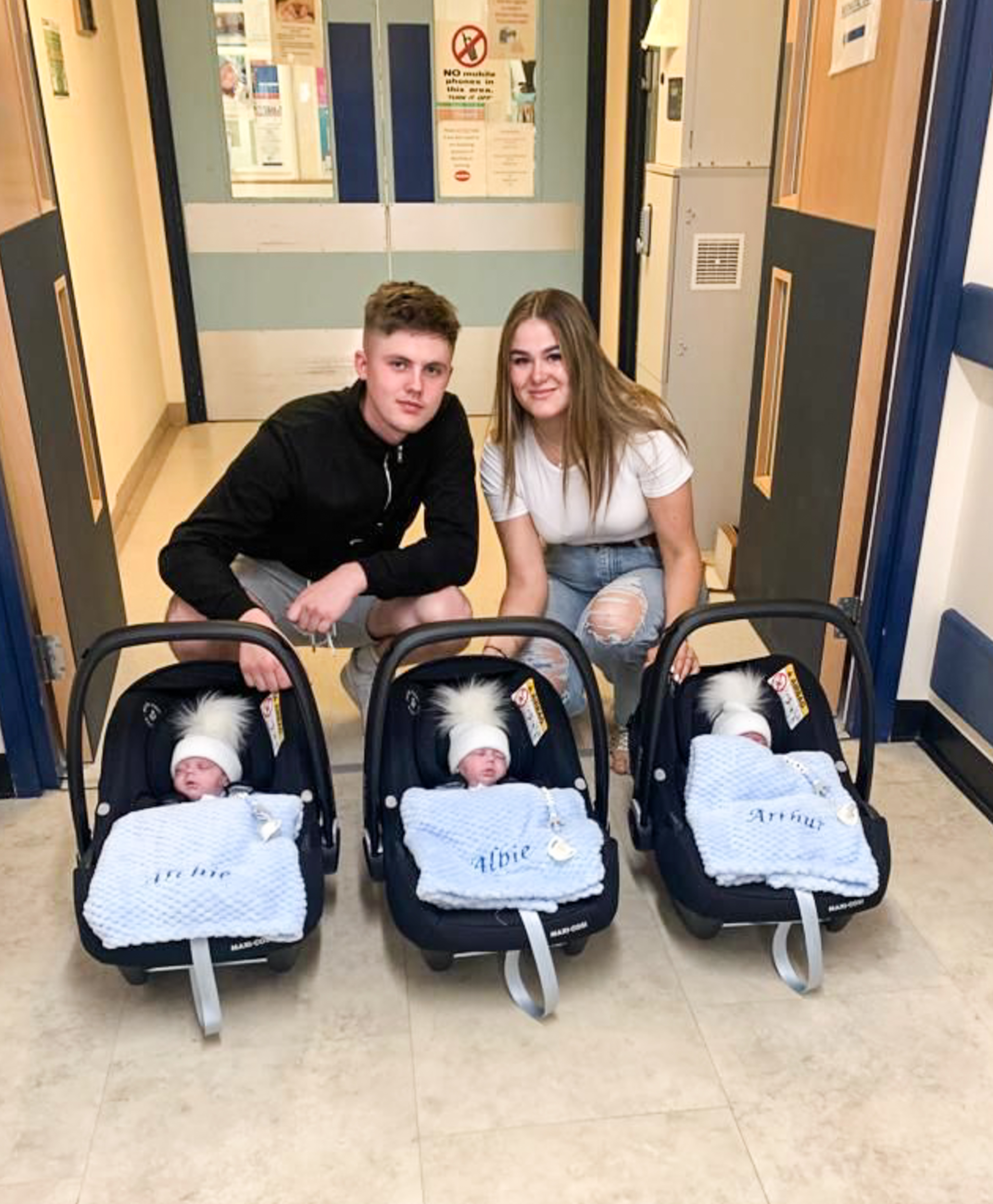 And this mum sparked jaw-dropping reaction with makeover of son’s bedroom – but some call it genius.

Plus this grieving mum broke down as stranger hands her heartwarming note on first trip since losing her daughter.