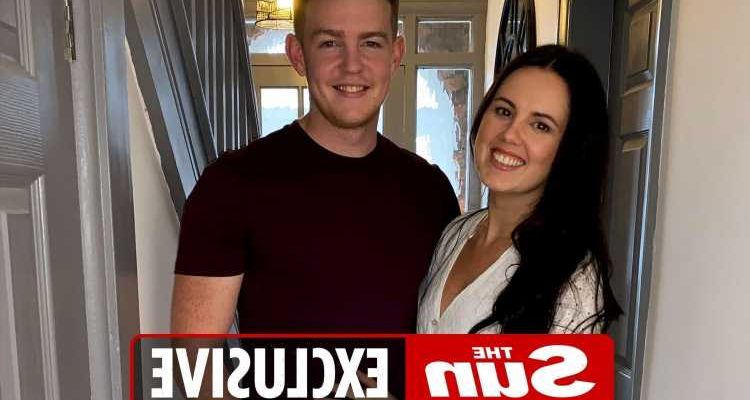 WHEN Tasmin Blaney was made redundant while applying for a mortgage, she feared her dream of buying her first home would crumble.

But the fashion designer-turned-maths teacher is now the proud owner of a three-bed semi-detached home, which she bought with boyfriend Phil Bolger in September 2020. The couple, from Salford, Manchester, added a huge £67,000 to their home’s value in just a year – after teaching themselves DIY on YouTube.

The couple, who had no prior DIY experience, taught themselves jobs like tiling and sanding the floorboards.

They spent £19,000 on updates and Tasmin reckons they have saved £9,000 by doing much of the work themselves, as well as scouring Facebook Marketplace, Gumtree and eBay for bargains.

But the pair, who met at school and have been together for nearly eight years, almost lost out on bagging their dream home.

Tasmin says: “Because of Covid, I was made redundant while we were in the middle of buying, which was so stressful.

“We’d planned to buy by September 2020, because the contract was ending on our rental, which was a two-bed social housing flat in Salford costing £600-a-month.

“I found the house just before we went into lockdown in March, but within days I was furloughed from my job at fashion supplier Visage.

“Eventually, I was made redundant in July 2020. I was devastated but that very night, we were told we’d been accepted for the mortgage, so thankfully it was all fine. It was just luck it went through.”

Covid threatened their plans again when Tasmin and Phil, a pallet repairer, were told they needed to stump up a 15 per cent deposit, coming to just under £26,000.

The pair had scrimped to save ten per cent, which would have been enough before the pandemic, but luckily a family friend came to the rescue, lending them the final £9,000.

Tasmin says: “We put a little bit aside every month, by just being really strict with our spending. We haven’t been on holiday since going to Seville in July 2019.”

Realising early on they couldn’t afford to buy in Salford, the pair widened their search to Warrington.

They bought a Thirties house which hadn’t been done up for around five years, transforming it into a Scandinavian-inspired home, “with a modern twist”.

“I’d always wanted a project house, I have a design background and am very particular about what I want.

“I didn’t want to pay for a house that wasn’t to my taste and have to do it up again, it seemed like a waste of money.

“Everything we’re doing is adding value, so to me it’s a no-brainer.”

Being on a budget means that Tasmin and Phil needed to get creative if they wanted to add value to their new home. Tasmin says: “I didn’t have much DIY experience but I didn’t realise how little I knew until we got going.

“I’d always wanted to try tiling. I watched Phil’s dad and YouTube and thought, ‘I’ll give it a go’, saving us £300 on labour costs.

“Before Christmas, we were constantly working on the house — every weekend and after work.

“We’d get up at 8am on the weekend and work until at least 6pm, then we would normally ask mine or Phil’s mum to make us tea, as we were so knackered.”

To transform their home, the pair knocked down a wall to create an open-plan kitchen diner, paying a builder family friend who gave them a £1,000 discount.

They installed a new kitchen and quartz worktops, which they got through another acquaintance to save £3,000, and fitted the wood parquet floor themselves, saving £400.

The pair sourced their bathroom shower, toilet and sink from eBay and bought an ex-display bath, reduced from £600 to £180 as it “had a tiny scratch on one side”, which is hidden by a wall.

They paid professionals to do the plumbing, plastering, gas and electrical work, as the house needed a new boiler and rewire at £3,000 a pop, but did the painting and other jobs themselves.

Tasmin sourced bargains like £5 bedside tables from Gumtree and used her design skills to make much of their furniture herself.

She built their dining-room table for £90 by buying the wood, legs and varnish individually, saving around £200, as well as their dining bench with storage for £60, saving £300.

Tasmin says: “I had family coming round on Christmas Day and we only finished the kitchen, bathroom and dining area two days before.

“It was really hard. When I first started teaching, we didn’t even have a bathroom or a sink, it was just a pipe out of the wall. We had to spend two nights out of the house when we replaced the toilet — that was the one thing we couldn’t live without.

“We didn’t have a kitchen either, but luckily my mum only lives ten minutes away, so she was making us a lot of meals.

“It was tough but it’s all so worth it now.”

Tasmin had to fit the mammoth task of redecorating their home around starting her new job.

It was really hard. When I first started teaching, we didn’t even have a bathroom or a sink.

The teacher, who has a degree in fashion, design and technology from Manchester Metropolitan University, did an eight-week Subject Knowledge Enhancement course over the summer and started work in a school in September 2020, which coincided with the move.

Tasmin says: “It’s the best feeling when I think about how far we’ve come in one year.

“I think, ‘Oh, my God, this is actually my house’. That’s what keeps me going. The upstairs is not finished at the moment, but I know it will get there because the downstairs looks so good.

“I always wanted to have a house, be married and have a kid by the time I was 30.

“Now I’m just happy with the house. It feels really good to have a nice home in a nice area.” 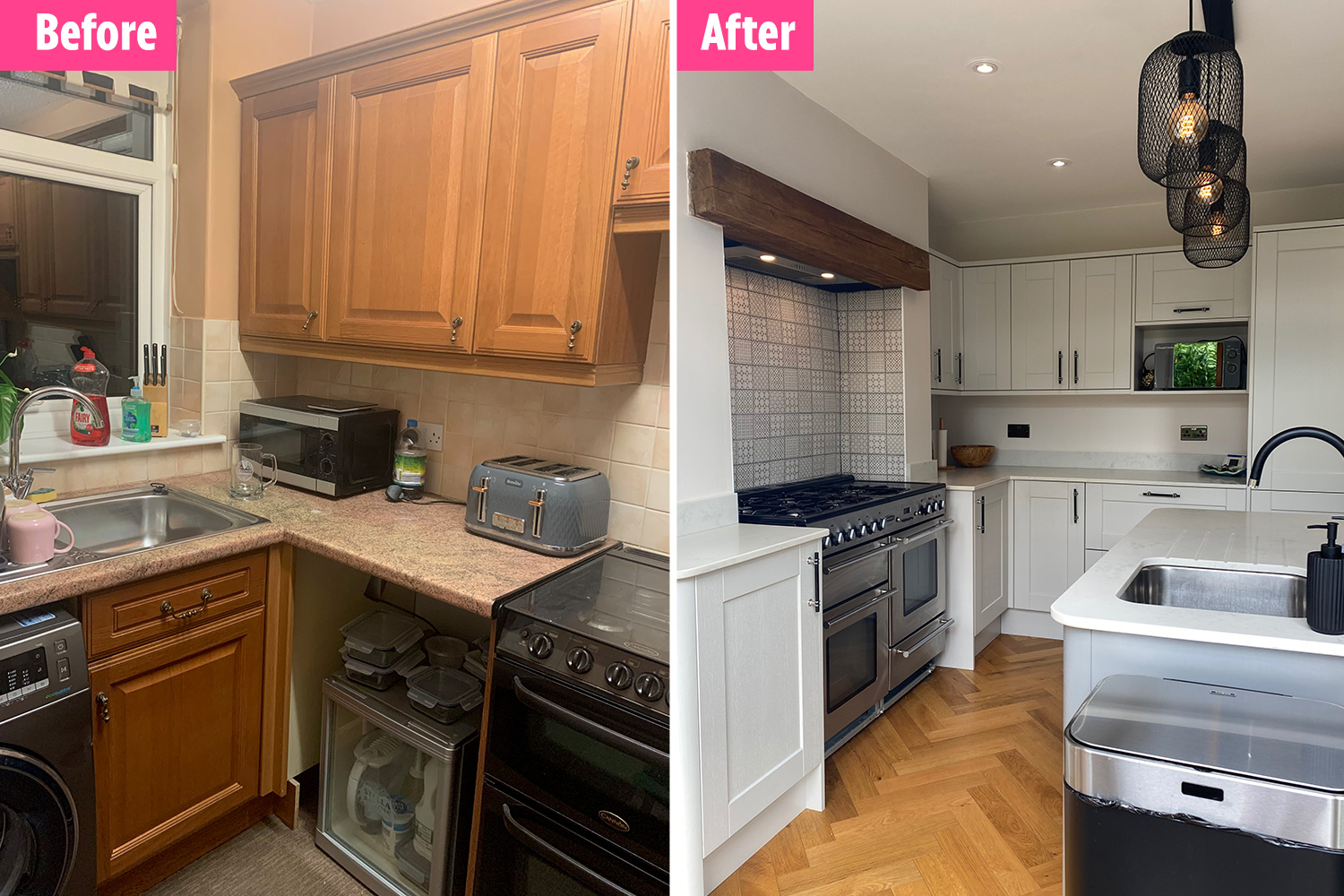 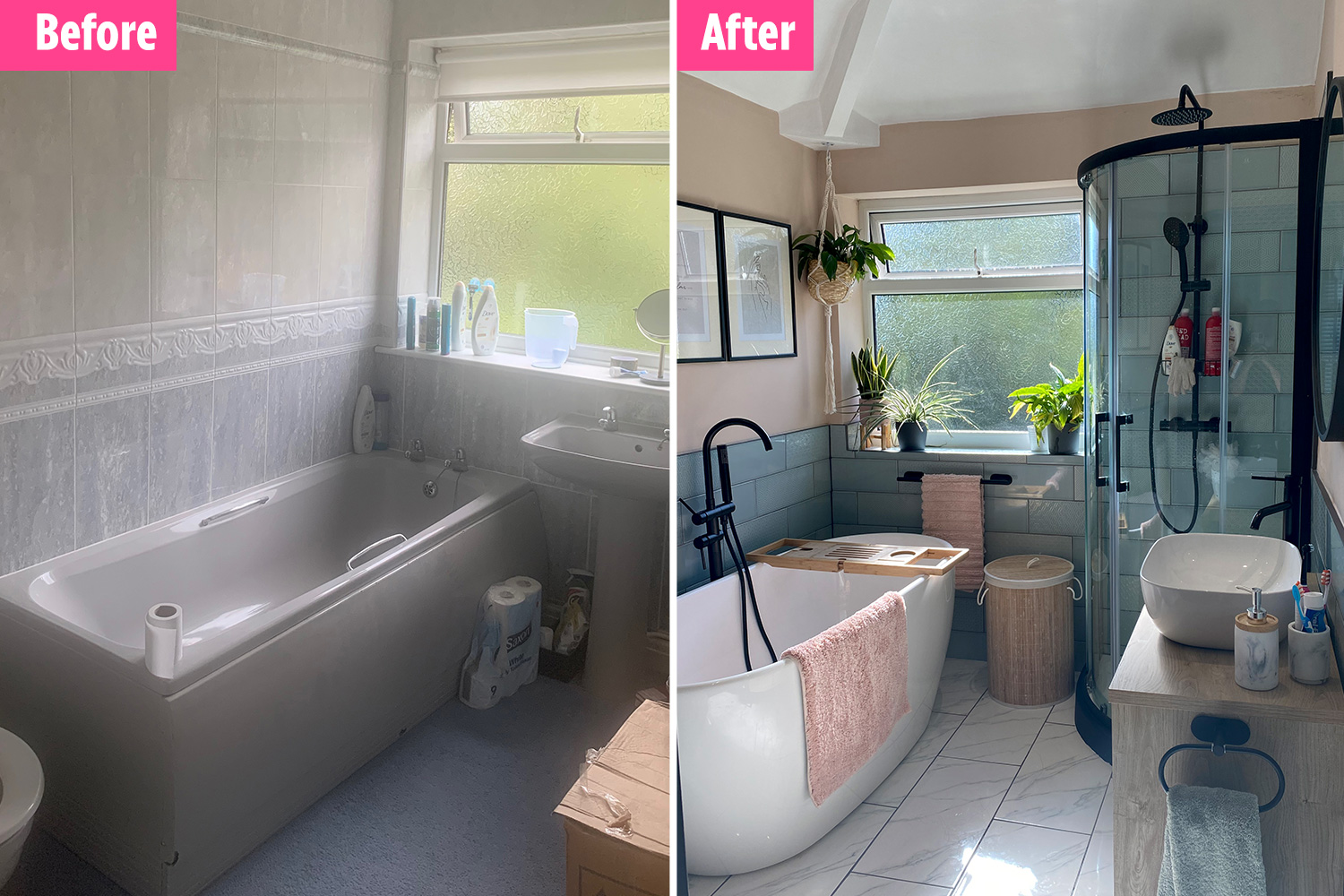 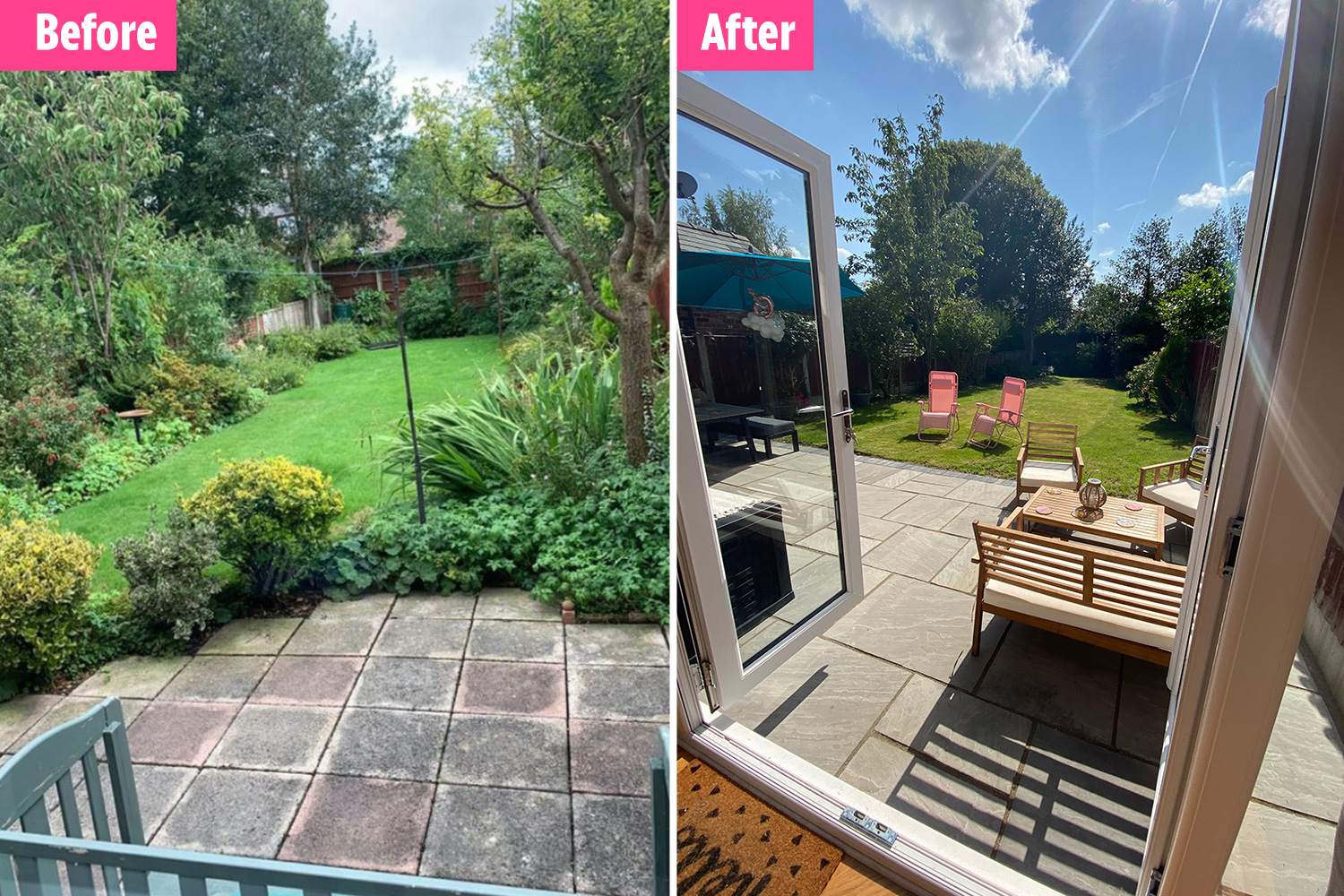 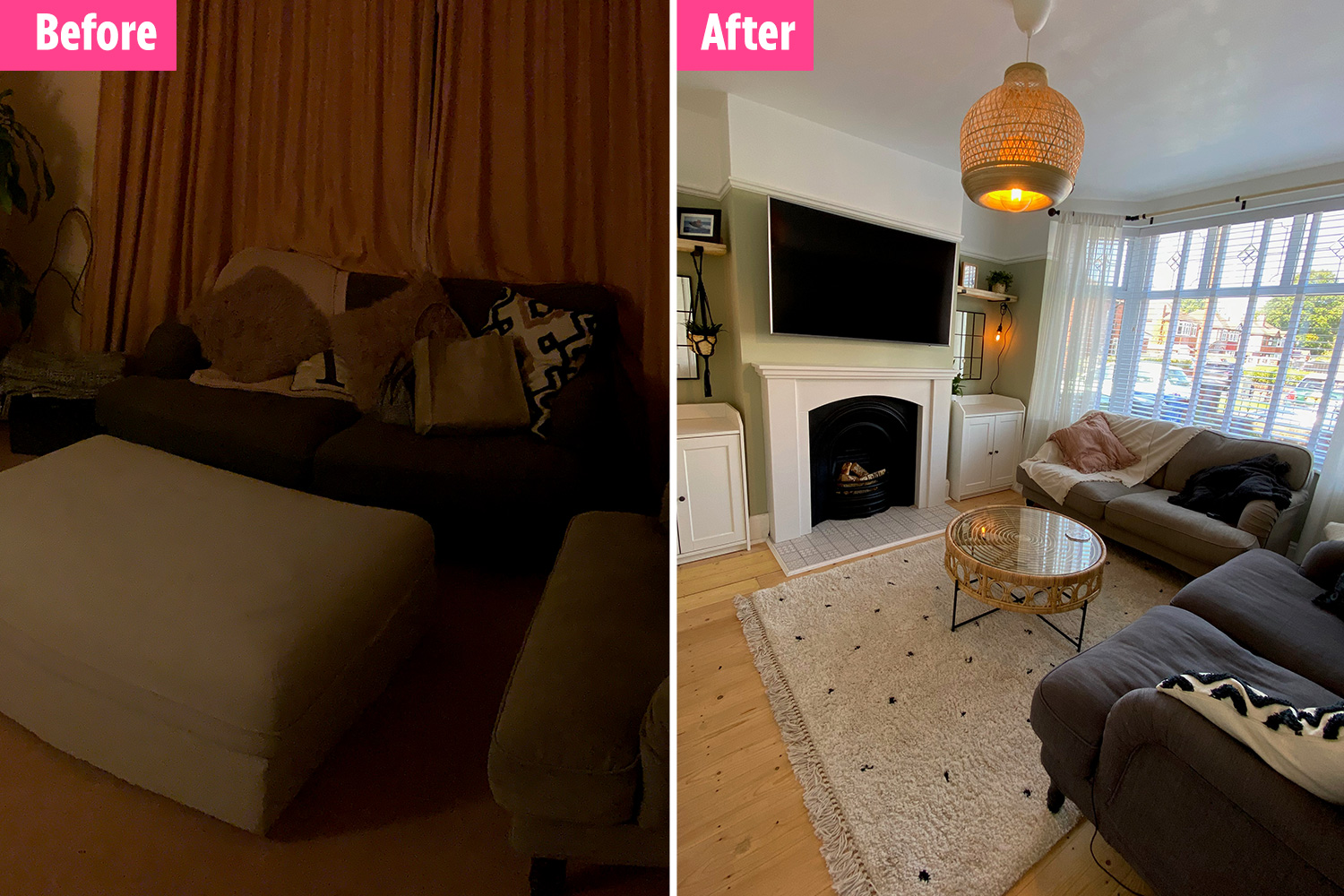