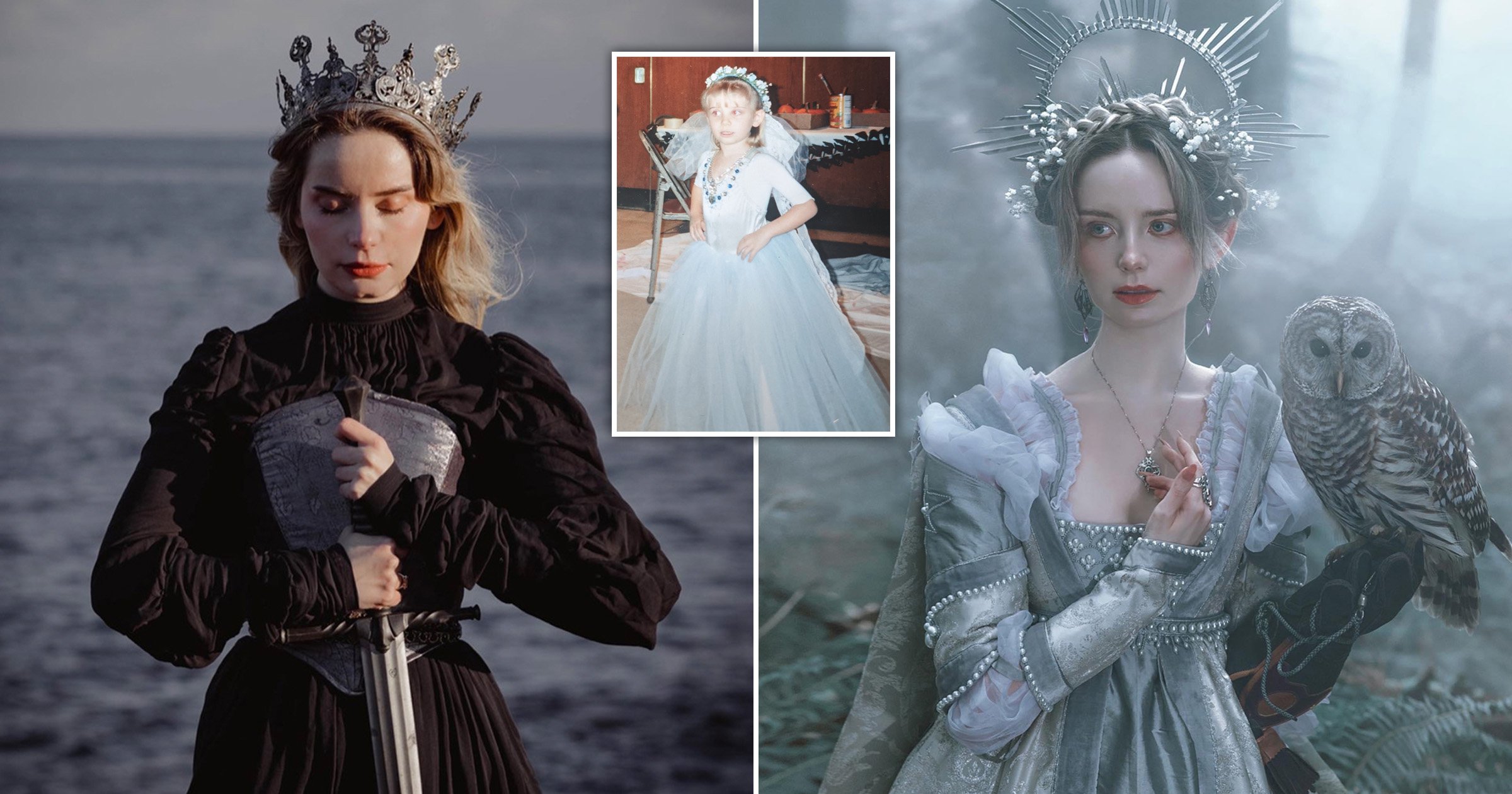 ‘When I am Queen Astraea, I feel like me, exactly as I should be,’ says Astraea, a 28-year-old former graphic design intern turned TikTok royalty, who will only be addressed by her ‘regal title’.

After being made redundant from an internship, Astraea started living out her lifelong fantasy of being a medieval Queen, dressing in corsets, tiara and ballgowns worth thousands of pounds.

It all started when she was a child when, after a trip to New York’s Museum of Natural History with her parents, Lisa and Brian, she became fascinated with medieval queens and princesses.

‘I was a very precocious child and very curious,’ Astraea says.

‘I remember visiting the museum and being mesmerised by the magnificent portraits of these beautiful, astounding and powerful women.’

An only child living with her parents on the Upper East Side of Manhattan, she created an imaginary friend, Princess Astraea, named after the ancient Greek goddess of justice, innocence and purity.

‘We would have tea parties together or go frolicking in Central Park to vanquish enemies and go on adventures,’ she says.

When she was nine, she dressed up as Princess Astraea for the first time at the New York Renaissance Faire.

‘It was incredible,’ she recalls.

‘I saw this beautiful, royal purple cotton dress with long pointed sleeves and I begged my mom to buy it for me.

‘Of course, she caved in and bought me the dress and I felt like a million bucks.

‘I felt really powerful – it was transformative.

‘It felt so freeing, like I could be myself.’

For the next four years, she refused to take off that purple gown except for school.

After being called ‘weird’ during her teenage years, Astraea took a break from the royal roleplay, but found that no matter how much she experimented, she never felt as much like herself as she did while dressed as a princess.

Even though she looked outwardly like an ordinary young woman, Princess Astraea was never vanquished: ‘She was always someone I had in my head, I never lost her,’ she says.

Then, in 2019, Astraea found a live-action role play (LARP) group in New Jersey, where she was able to resume her role as Princess Astraea once a month, dressed in a white and blue renaissance dress and a tiara.

It was here that she met her boyfriend of three years, IT technology consultant Matthew, 33, who was roleplaying as a Paladin, a fictional holy knight.

‘Our characters date in that world too so it isn’t weird when we meet there.

‘He finds it amazing that I have come this far with Astraea.’

Everything changed for Astraea when she lost her job in lockdown and decided to make some TikToks with her friends from LARP.

She says: ‘I decided to make this video of me miming to Ab Fab, in my dress and tiara, and uploaded it – thinking only my friends could see it.

‘When I woke up in the morning, I screamed at the top of my lungs.

‘Somehow, this is now my full-time job.’

Living off brand deals and some creator income from TikTok, Astraea now earns around $1,700 (£1,350) in total a month.

Astraea is normally a Queen during the work hours of nine to five, wearing her full royal regalia to make her TikTok videos.

‘I go to the grocery store in my dresses when I run out of milk and I have run through the street as a medieval princess,’ she says.

‘Most of the time, people gawk at me, saying, “Oh my God” and “Whoa” and then there’s always a lot of pointing.

‘Kids come up to me immediately and I always say, “Hello, it is I, your Queen” and they love that.’

Even in her everyday life, Astraea still wears corsets and ‘peasant’ dresses.

‘My friends joke that it is the Queen incognito,’ she says.

The response to her videos continues to amaze Astraea.

‘My character is all about rebellion and being whatever you want to be,’ she says.

‘In my videos, I show people that she can be just as powerful in a pretty pink ball gown as she is with a sword.

‘I get messages from young girls or guys or people transitioning on Instagram who say that it has inspired them to buy a crown or make themselves feel special for the day and represent themselves as they are.

‘If I’m making people smile, then what I am doing is worth it.’