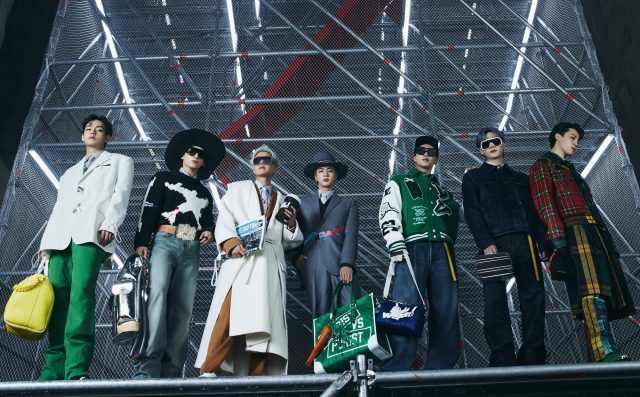 The fall 2021 Louis Vuitton men’s collection by Virgil Abloh has spawned a spin off — and it will be brought to life by South Korean boy band BTS, WWD has learned.

The French luxury brand plans to unveil the collection, which includes 34 new looks and seven from the original range that was unveiled last January, via a film that will debut on its website today at noon CET. The centerpiece of the online reveal will be an appearance by BTS, who signed on as Vuitton ambassadors last April with a promise of “exciting projects” to come.

Each member of the supergroup will wear one look in the film by Korean director Jeon Go-woon.

“The film stages a conversation between space, movement and global connectivity central to our moment in time, and explores the city of Seoul through the lens of diversity,” according to Vuitton, noting that the soundtrack will feature an original score by CIFIKA, Kim Kate and Net Gala.

“Seoul has such a unique energy and BTS embody this vibe completely,” Abloh said. “They add their spin to the collection, make it their own and take it to new heights.”

Abloh, men’s artistic director at Vuitton, initiated an itinerant model of fashion shows last fall, beginning with the spring 2021 season that he introduced with physical runway displays in Shanghai and subsequently Tokyo.

The designer calls it “The Voyage,” explaining that the format transcends traditional fashion seasons and puts collections in the context of “exchanges across cultures and nations, observing the core values of diversity, inclusivity and unity” that are key to his creative approach.

BTS, an acronym of Bangtan Sonyeondan or “Beyond the Scene,” is made up of seven performers — Jin, Suga, J’Hope, RM, Jimin, V and Jungkook — each of whom has his own style. The band topped the Billboard Hot 100 chart three times in 2020, and has been recognized at the Billboard Music Awards, American Music Awards and MTV Video Music Awards.

The boy band’s massive popularity and cool style have helped win over key leaders in the fashion crowd. BTS landed on Vanity Fair’s 2019 Best Dressed List. The same year, they were named global brand ambassadors for Fila and were dressed by Dior’s men’s wear designer Kim Jones, who created stage outfits for a leg of the group’s “Love Yourself: Speak Yourself” world tour.

Vuitton had already leveraged the power of K-pop by enlisting BTS to do a teaser campaign ahead of Abloh’s fall 2021 collection for the brand unveiled in January. BTS boasts 45.1 million followers on Instagram, for example.