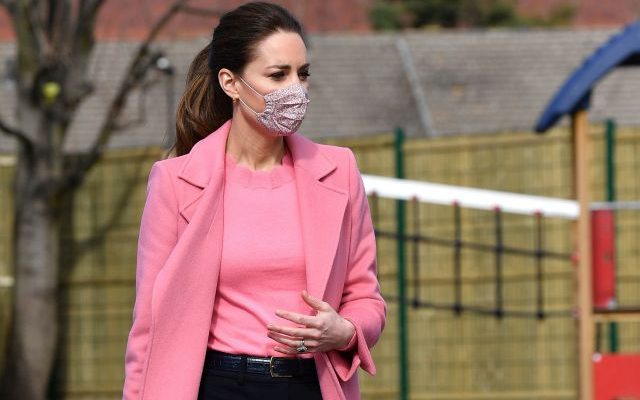 LONDON — The Duchess of Cambridge and Prime Minister Boris Johnson were among hundreds of men and women who paid tribute over the weekend to Sarah Everard, a 33-year-old marketing executive who was kidnapped and killed in London earlier this month.

A London police officer has been charged with the murder of Everard, who disappeared while walking home from a friend’s house at 9:30 p.m. on the evening of March 3.

Kate Middleton made an unscheduled, unofficial visit to a memorial for Everard that had been set up on the bandstand on Clapham Common, in south London, where Everard was last spotted by CCTV cameras.

According to widespread media reports, the duchess laid daffodils picked from the gardens of Kensington Palace at the memorial.

Johnson said in a tweet that he and his fiancée Carrie Symonds were lighting a candle for Everard “and thinking of her family and friends. I will do everything I can to make sure the streets are safe and ensure women and girls do not face harassment or abuse.”

The vigil on Clapham Common took place despite having been banned by police earlier in the day. The organizers, a group called Reclaim These Streets, had also urged people to take part in a doorstep vigil, lighting candles or shining lights from their homes at 9:30 p.m. on Saturday.

Lockdown regulations are still in force across England, and police had warned people not to gather on Clapham Common for safety reasons.

Although the event was peaceful, with people holding placards saying “End violence against women,” “Cops don’t keep us safe,” and “Your pain is our pain,” the evening eventually descended into chaos, with police making arrests and later dispersing the crowd.

There are now widespread calls for the head of the Metropolitan Police, Cressida Dick, to explain the behavior of police. Others are calling for Dick to step down.

Similar vigils took place in towns and cities across the U.K., with people laying flowers in memory of Everard, while newspaper opinion columns called for greater protection for women.

“In this day and age, it is unconscionable that, as so often happened in the past, we shrug off the issue of women’s safety,” said The Sunday Times of London. “Sarah Everard’s terrifying ordeal must not be forgotten.”

The Guardian called the police reaction to events “brutal” while The Sunday Telegraph described the scenes of police violence during Saturday night’s vigil as “distressing.”