When Amit Seth began to propose to Sue Jin Lee in 2019 on a balcony overlooking the ocean in Ischia, an Italian island off the coast of Naples, she walked away, back inside their hotel room. She wasn’t overcome with emotion or opposed to getting engaged. She was hungry, cranky, and she had already moved past trying to anticipate when Mr. Seth was going to ask her to be his wife.

The ballet program he was brandishing, from one of their first dates, didn’t register at first as the prelude to a proposal. “I’m thinking why did you bring that?” said Ms. Lee, the director of partnerships and audience development at Women’s Wear Daily. “I just did not put two and two together.”

This wasn’t the first time that Ms. Lee and Mr. Seth found themselves operating at different tempos. The night they met in 2017 at a crowded bar in Manhattan’s meatpacking district, she initially spurned his advances, then suggested they talk more elsewhere, before announcing, suddenly, that she had to leave their new location for a date.

“I was thinking to myself, ‘My god, I went from getting rejected for a drink to getting dragged to another bar to now being told she’s got to go because she’s late for a drink,” said Mr. Seth, an executive director at J.P. Morgan Asset Management. “I’m like, this is a yo-yo.”

Mr. Seth’s rhythm was just as complicated. When he first approached Ms. Lee, after a night of partying with friends, he was uncharacteristically brash and outgoing, traits she tends to find off-putting in men. And even though he pursued Ms. Lee afterward with great vigor, and says he knew within weeks that they were eventually going to get married, he was committed to advancing their relationship slowly and carefully. 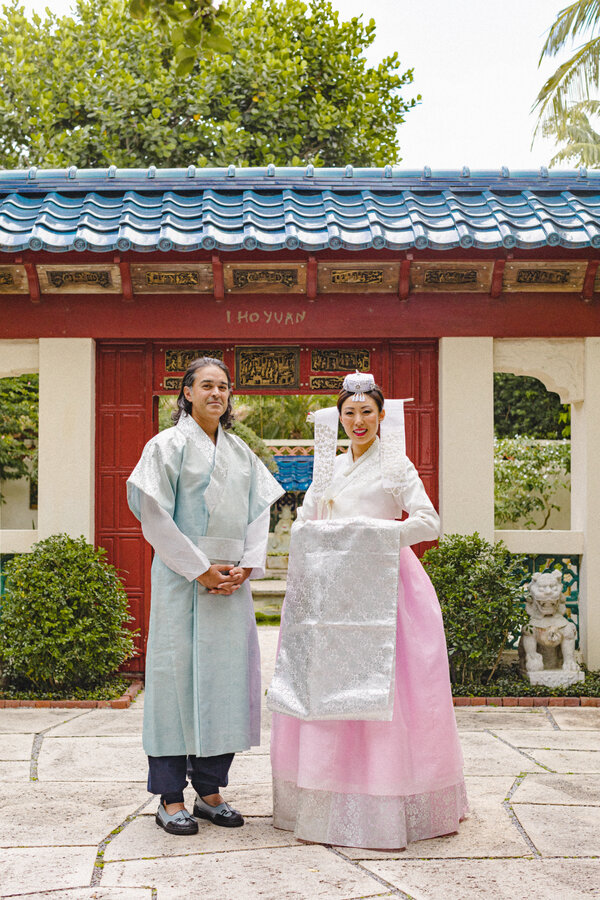 None of these discrepancies ultimately proved to be detrimental. After their initial meeting, Mr. Seth was not upset about Ms. Lee’s hasty departure. Their slight misunderstanding in Italy was also swiftly resolved. When Ms. Lee saw that Mr. Seth had opened a ring box, she instantly snapped to attention and accepted his proposal, her appetite and fatigue completely forgotten.

This dynamic was on full display at the couple’s outdoor wedding March 20 at the Norton Museum of Art in West Palm Beach, Fla. The ceremony, officiated by the groom’s sister, Rashmi Seth, who was ordained by American Marriage Ministries, included Korean, Hindu and American elements. After exchanging their vows before 21 guests, Mr. Seth tied a mangalsutra necklace around Ms. Lee’s neck to represent, sanctify and protect their auspicious connection.

A modernized version of the Korean wedding custom pyebaek followed the reception dinner. Mr. Seth’s parents were given dates and chestnuts to toss to Ms. Lee to welcome her into their family and symbolically encourage the newlyweds to have children. But instead of lobbing them one by one for the bride and groom to catch in the detachable train of Ms. Lee’s dress, their fathers, Dr. Ravi Seth and John Lee, dumped the whole lot in at once as a joking suggestion that they have many children.

Their stock of ceremonial fruits and nuts instantly exhausted, both sets of parents, along with Ms. Lee and Mr. Seth, toasted each other with Korean rice wine.