At the wedding of Kanye West and Kim Kardashian West, Jaden Smith wore a very unorthodox outfit: a white Batman suit. Smith explained why he felt compelled to wear the suit at both Kimye’s wedding and his prom. He later wore the same outfit in the music video for his song “Batman.” In addition, he’s very opinionated about Batman, particularly the possibility of Robert Pattinson playing the role. 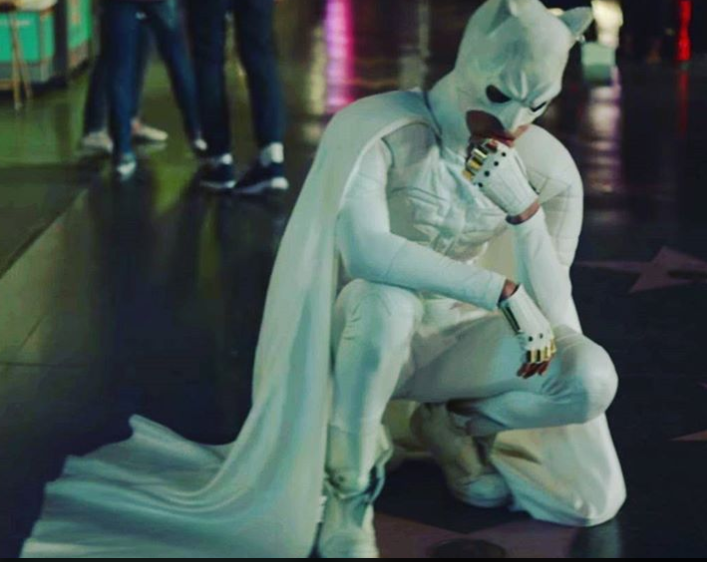 According to comicbook.com, Will Smith opened up about the time his son wore the Caped Crusader outfit to a prom. Smith told his son he shouldn’t wear the suit. Jaden responded by saying he’d compromise by wearing a tie. Ultimately, Jaden wore a tie in addition to the Batman suit.

Smith noted how his son’s choice of attire became the No. 1 trending topic on Twitter, beating out ISIS (the Islamic State of Iraq and Syria). Jaden saw this development on Twitter as evidence that something is wrong with the world. Later, Jaden gave the world an explanation for his decision to wear the outfit to the prom and at Kimye’s nuptials.

“I wore the Batman suit to heighten my experience at the… prom which was fun,” Jaden told GQ, “but also at the wedding I felt as though I needed to protect everyone there and needed to have the proper gear to do so.” In addition, Jaden explained his fondness for “drapey” clothing.

“I’m just expressing how I feel inside,” Jaden added. “Which is really no particular way because every day it changes how I feel about the world and myself, but I like wearing super drapey things so I can feel as though I’m a superhero, but don’t have to necessarily wear superhero costumes every day.”

Though Smith isn’t wearing his costume daily, he did draw further attention to it when he wore it in a video for a song titled “Batman.” The track features trap instrumentation and a hook where Smith repeats the name “Batman.” The hook is vaguely reminiscent of Drake and Future’s song “Jumpman.”

The video depicts Jaden riding around in a swanky white car. It’s no Batmobile — but it’s close.  In addition to dressing as Batman in the video, Smith has some strong opinions about Pattinson portraying the Caped Crusader in an upcoming film.

One Caped Crusader comments on another

“I’m at a loss for words with how excited I am for him,” Jaden told Rolling Stone. “He will be the best Batman. I’m losing my f*cking sh*t.” That’s certainly a huge endorsement from one celebrity who donned the suit to another.