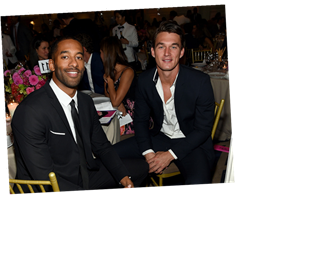 If you’ve been a follower of the Bachelor franchise for long enough, there’s a good chance you have a handful of favorite cast members from past seasons. For many fans, one of those faves is Tyler Cameron. After making it to the finale in Hannah Brown’s Bachelorette season in 2019, the 27-year-old stayed on fans’ radars (mostly by dating famous models and being funny on social media), which is how the world took notice of The Bachelor’s Season 25 lead, Matt James. Now, it’s not a matter of if, but rather when Tyler C. will show up on Matt James’ Bachelor season to give his bestie some support.

While the series oftentimes brings past contestants in for cameos, Tyler and Matt’s friendship started long before both entering the world of Bachelor-related stardom. The duo met at Wake Forest where they both played football (Matt played wide receiver and Tyler was backup quarterback) before graduating and becoming roommates in NYC. From there, Tyler and Matt founded their organization, ABC Food Tours.

According to Matt’s ABC bio: "The organization is designed to find creative ways to engage kids from underserved communities in New York City, encouraging physical and mental wellness, while also giving them opportunities for new experiences throughout the city." Needless to say, Tyler and Matt are totally best friend goals, which is why fans are eager to see the pair reunited on screen.

Luckily, a Tyler C. cameo is definitely happening in Season 25, it’s just a matter of when. On Dec. 1, Tyler posted a YouTube vlog outlining a recent trip to Utah. In the video, he talks about how he "just got back" from Nemacolin Resort, where Season 25 was filmed. He said: "I saw Matt. He’s extremely happy. He loves the girls … he spoke highly of them … he’s really pushing himself to be vulnerable, to put himself out there. And I think you’re gonna get a great season."

Tyler also said they (meaning the crew or possibly Matt and the contestants) "messed" with him a little bit, and viewers will get to enjoy it all at his expense. So it sounds like Tyler will play a fun role on the show this season, even if it’s short lived. And if you do a little deducing, there’s reason to believe his appearance will come toward the end of Matt’s season.

During his appearance on the Chicks in the Office podcast in mid-November, Tyler said he "recently" saw Matt. Since filming ran from the end of September to right around Thanksgiving, it looks like Tyler was there for the end (or at least final stretch) of Matt’s filming. Whether he’s there to offer advice or just provide some comedic relief, viewers will just have to wait to find out.